It may come as a surprise, but I’m not Cherokee. So what am I doing here? I’m going to try to answer that. I’m actually Jewish, and in good Jewish and Cherokee tradition, I’m going to do it with stories.

On Tuesday, I was in Highlands at Old Edwards Inn. The head chef there and I are going to be offering these foraging, cooking, and eating programs, so he was showing me around. His name is Johannes Klapdohr, so he’s not Cherokee either. He brought his kids, and he’s talking to them in German the whole time. So I ask him why. It turns out it wasn’t mainly so they know where they come from. It was so they could know more than one language, more than one way to see the world.

At one point Johannes tells me, “you wouldn’t know it, but my kids are a quarter African American.” That’s when I understood why he had said his wife wasn’t into nature. Not only is she from New York, but she’s half black. I went to school in New Jersey, where I spent my sophomore summer taking inner city kids out into the woods. One day we took them seining, which is when you take nets into a pond to catch minnows and stuff. One kid said, “I ain’t going in there! There be allergy in there!”

He ended up loving it. So sometimes our culture obscures our true nature. I mean, I’m a suburban Jew from Miami. I once told my grandmother that I forage for my dinner. When I went to the bathroom, she said to my mother, “for this he went to Princeton?” 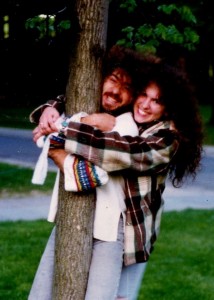 She liked my girlfriend, though. She was Jewish, of course. My grandma didn’t know she was an eighth Cherokee. You wouldn’t know it either, but one time a Native American guessed it. How did he know? Her two front teeth. It’s actually well-documented that Native Americans (and hunter-gatherers in general) tend to have large incisors. They’re not just for good looks!

I’m glad it wasn’t written all over her face. My aunt once introduced my grandmother to a business associate from Sri Lanka. This man was brown. My grandmother took my aunt aside and whispered, “but is he JEWISH?”

It reminds me of what my Cherokee friend likes to say: “we’re round, brown, and low to the ground!” So no, I’m not Cherokee.

People ask me how I ever got into foraging. I’m Jewish, for Christ’s sake: I love something for nothing! Every Saturday my family would go yard sailing. Now I go to a yard sale every day: in my yard!

Everybody loves free stuff; it’s universal. You know what the #1 daytime show in the U.S. is? The Price is Right. In Barcelona, it’s Mushroom Hunters. It’s basically the same show: free stuff!

Foraging is an Easter egg hunt, and you don’t have to wait for Easter. You don’t even have to guess the price. It’s always zero!

Jews have their own version of the Easter egg hunt. It’s called searching for the afikomen. So when I launched an initiative to have foraging taught in the public schools, I called it The Afikomen Project. I decided to honor my heritage just like we’re honoring our local predecessors tonight.

But the Earth is everyone’s inheritance. Being able to feed yourself from nature is everybody’s birthright. It’s a basic skill. It’s Divine Providence, literally. It’s what makes this place HOME.

So what makes someone “native?” What makes them “indigenous?” Do you have to be born there or can you just be “born again?” You know, John Denver wasn’t from West Virginia or Colorado.

I once saw a pamphlet at a rest stop. The title was God Has No Grandsons. It means that when it comes to religion or culture, you don’t just inherit your good standing. It’s like your membership in AAA: you have to renew it.

I wonder if my membership in the triple J (not to be confused with the triple K) has lapsed. I led Passover seders every year for twenty years. Seders are ritual dinners where you do Jewish stuff, but for the most part, you’re really just celebrating springtime and freedom.

I haven’t led a seder in ten years. But I don’t think being a “real” anything is about where you’re born, what you do, or how much of it. The important question is why. Why are you here tonight?

At those seders, I learned without a doubt that the best Jews are the converts. While they’re asking about what everything means and why, the native Jews are asking, “when do we eat?”

You might be thinking that too, so I’ll leave you with a story.

When I was a child, I had to go to synagogue. The service was pretty boring to me. Fortunately, the prayer book had a section in the back with stories, so I would occupy myself with reading them. Here’s one I still remember, more or less. It goes something like this:

A long time ago, there was a rabbi who, whenever things got really tough, would go to the forest, to a certain tree. And there he would perform a certain ritual and recite a certain prayer.

He brought his son once or twice, who also became a rabbi. And in his time, he would go back to the same tree. He’d perform the ritual, but he forgot the prayer. But he went ahead and did it, and it was all right. He got the guidance he needed.

In time, he took his son there, and although that son did not become a rabbi, he would go to that tree too, just like his father did. He didn’t know why his father did this strange ritual. So for a while, he just went through the motions. Eventually, he just skipped that part. He would just pray. And it was all right. He would leave in peace.

The man had a daughter. And when she was old enough, he brought her to the tree. He told her that his dad used to come here, and his dad before him, who was a great rabbi and would say a certain prayer. But all that’s all he could remember.

She went off to college, and one day, she came home with a serious problem, one that young women in college have all too often. She had a big decision to make. She went back to the woods to find the tree.

She looked everywhere. After what seemed like hours, it was starting to get dark. She just sat down and prayed. She never found the tree. And it was all right. When she left, she knew what she would do.