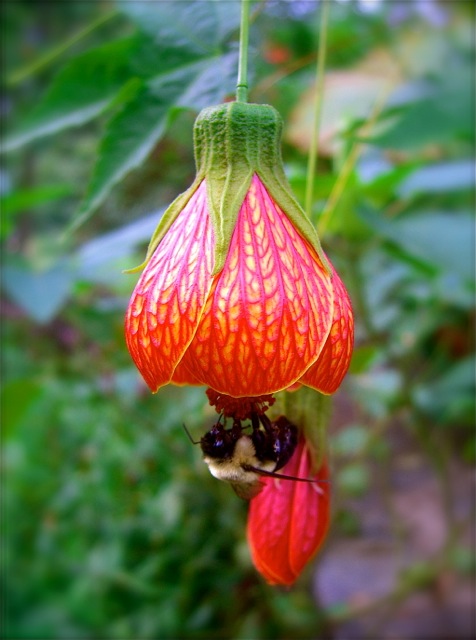 I love to think of nature as an unlimited broadcasting station
through which God speaks to us every hour
if we will only tune in.

There is more wild food in the city than in the country. And Asheville has at least one “waste lot” that has certainly not gone to waste.

In 1997, George Washington Carver Edible Park was built out of a trash pile in what continues to be a predominately African-American neighborhood less than a mile from the center of Asheville. Designed using permaculture principles, it features over forty fruit and nut trees, vines, and shrubs. Although not focused on wild plants, it has plenty, mostly because they don’t weed very often!

Carver Park has been featured in The New York Times, The Huffington Post, Plough to Pantry, Tasting Table’s National Edition and other major media outlets because it is the first public forest garden in the country. In March of 2012, NPR featured an edible park being created in Seattle, one that has been mistakenly said to be the first. Just outside Seattle, The Gilman Boulevard Edible Landscape was founded in 1985, but it’s not a forest garden. The Fruit and Spice Park near Miami dates from the 40’s, but was not specifically intended “for public consumption.” Here are a few more that have popped up since. And again in Miami (my hometown), there’s a 2015 proposal to plant public edibles across the city.

Despite Carver Park’s preeminence, in Asheville it remains largely unknown — except to vagrants and “freegans.” To cut down on the former, in 2016, the City of Asheville cut down, without contacting the organization that manages the park, several twenty-year-old fruit trees. I guess a prophetic park is not without honor…

We live in The Garden of Eden, yet blinders direct us through sliding glass doors to our food. It’s time to think outside the box! In recent years, with the growing transition (a.k.a., “prepping”) movement, we’ve begun to remember the ground we stand on — and not a moment too soon. Thanks to organizations like Trees That Feed, gardens like Carver Park can be found all over the Caribbean, not to mention all over Havana, where necessity has been the mother of invention, and this park too is an inspiring prototype for similar forest gardens across North America. What could be more delightful, more local, and more green than an edible park?

Carver Park is managed by Bountiful Cities Project with help from the The Buncombe Fruit and Nut Club. They are always open to volunteers to help share the wealth. Another little-known nearby “natural grocery” is Beaucatcher Overlook Park. This preserve is much larger and more wooded (think: more mushrooms).

In every city, there are parks, “waste lots,” even front yards brimming with food, if only we have eyes to see. There is no hunger problem. We just have an Eden disorder. And it’s time to cure it, once and for all.