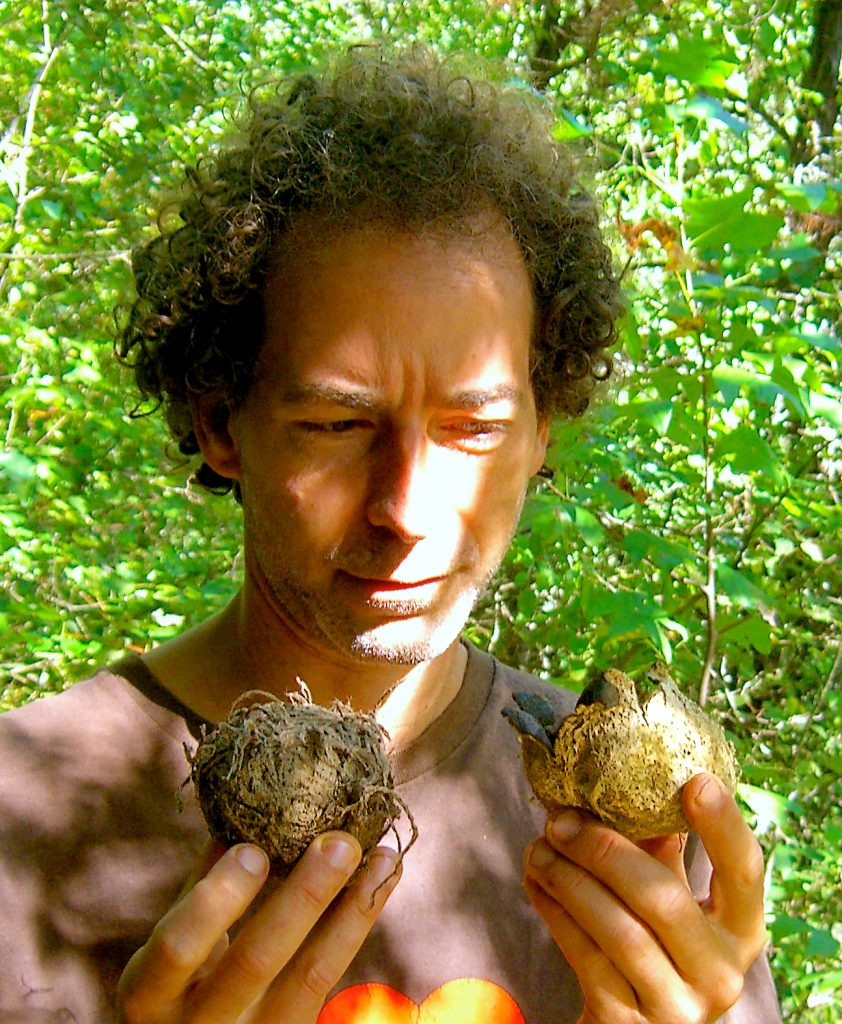 An excerpt from the forthcoming book
Wild Mushrooms, by Alan Muskat

When it comes to eating wild mushrooms, being an expert is not about knowing a lot. It’s about being careful. Amateurs can easily avoid the deadly species and mycologists can easily get poisoned. Most of us are expert drivers, yet anyone can have a moment of carelessness. You’ve got to keep your eyes on the prize. I can be biggest mushroom expert in the world, but I don’t know what I’m doing if I’m not paying attention.

Honey mushrooms, for example, often fruit in the hundreds, potentially with deadly skullcaps (a.k.a., funeral bells) growing right in among them. It’s not hard to tell the two apart, but if you were gathering quickly…

Psilocybe also fruit by the bushel, but deadly conecaps are occasionally growing among them. Pick your poison! It’s not just say no, it’s stay slow. Don’t get carried away or the wrong mushroom might. 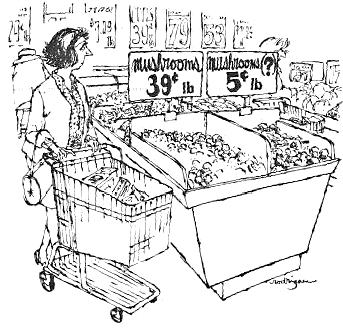 It’s not always easy to stay calm when facing forty pounds of free fungus. The bargain hunter-gatherers among us, those whose heart skips a beat at the phrase “70% off,” would do well to consider that like sale, free is four-letter word. Finding mushrooms can feel like finding gold, but it won’t glitter in the shitter.

It took me many years to realize that just because something‘s free doesn’t mean I want it. I once got a fortune cookie that said, “an empty stomach is a poor political advisor.” By then, of course, it was too late.

If only one could tell true love from false love as one can tell mushrooms from toadstools… with love, you have no sooner lighted on anything that bears even the remotest resemblance to it than you are perfectly certain it is not only a genuine specimen, but perhaps the only genuine mushroom ungathered.

Woody Allen says “marriage is like mushrooms: we notice too late if they are good or bad.” In your love for mushrooms, remember that Nature’s supermarket is no place for impulse buys. When your cart’s on fire, you must realize, spores get in your eyes.

Worse than being sloppy is being cocky. Beyond ignorance lies arrogance. From  “Russians Dying — Literally — for Favorite Fungi” (Los Angeles Times, 2000):

“It is very stupid to bring home and cook your own poison,” he said grimly in an interview after returning to the hospital. “But we have been picking and eating mushrooms all our lives, and nothing ever happened…”

Like many victims, Kayava and his wife dismissed the early symptoms of poisoning as merely a bad stomach upset and delayed going to the hospital until Monday morning, even though Marina’s parents had been rushed to the hospital in an ambulance early last Sunday. Marina died Thursday, four days after her father.

…Part of the problem seems to be overconfidence among Russian mushroom hunters, many of whom pride themselves on their expertise.

It’s my body and I’ll die if I want to! Nature’s no place for mushismo. When composer and mushroom-hunter John Cage first explored wild edibles, he served six people what he thought was skunk cabbage, eating more than anyone else, he relates, “in an attempt to convey my enthusiasm over edible wild plants.” He ended up in the hospital. Of course he was back to mushrooming soon afterward (John Cage, Silence: Lectures and Writings).

When a colleague of mine was first learning her trade, she sought out a man she was told was a shaman. She arrived at a nondescript office building to find a white guy in jeans and sneakers. “Are you a shaman?” she asked. He said, “I am a student. And if I stop being a student, I’m in trouble” (Bloom Post, Shaman’s Toolbox).

Actually, even a deadly mushroom probably won’t kill you; it will just make you wish you were dead. So go ahead, be a jackass. Youtube awaits! After all, whatever doesn’t kill you only makes you famous.

Speaking of foraging ahead, remember that your mushroom knowledge is like your cell plan: it may not include roaming. Just as languages can vary by country, so can mushrooms. That’s why, when you hear in the news about immigrants killing themselves, it’s often not because they didn’t know their mushrooms; it’s because they didn’t know ours. Here in the land of the free lunch, there are unfunguys that don’t exist overseas — and v.v. Do your due diligence, or you too may be a basket case.

Even if you stay hunkered down in the only terrorism, inflation, and climate-change-free country on Earth, you still need to be aware of all the deadly mushrooms just waiting to invade our shores. It’s not unusual for mushrooms to show up someplace new. The death cap came here, sans green card, only 75 years ago. Shiitake is naturalizing as we speak. And a deadly Asian oyster mushroom look-alike, Trogia venenata, could show up any day now. I say build a bubble and make them pay for it!

Paying attention includes being aware of your own body. On average, one person in North America a year dies from eating a deadly mushroom. Another dies every four years due to a severe allergic reaction to mushrooms. Like most car accidents, both are preventable — with a little patience.

To sum things up: eating wild mushrooms can be far safer than driving, but only if you’re careful. The second oldest mushroom joke in the book (after the one about the fun-guy) is not that funny either: