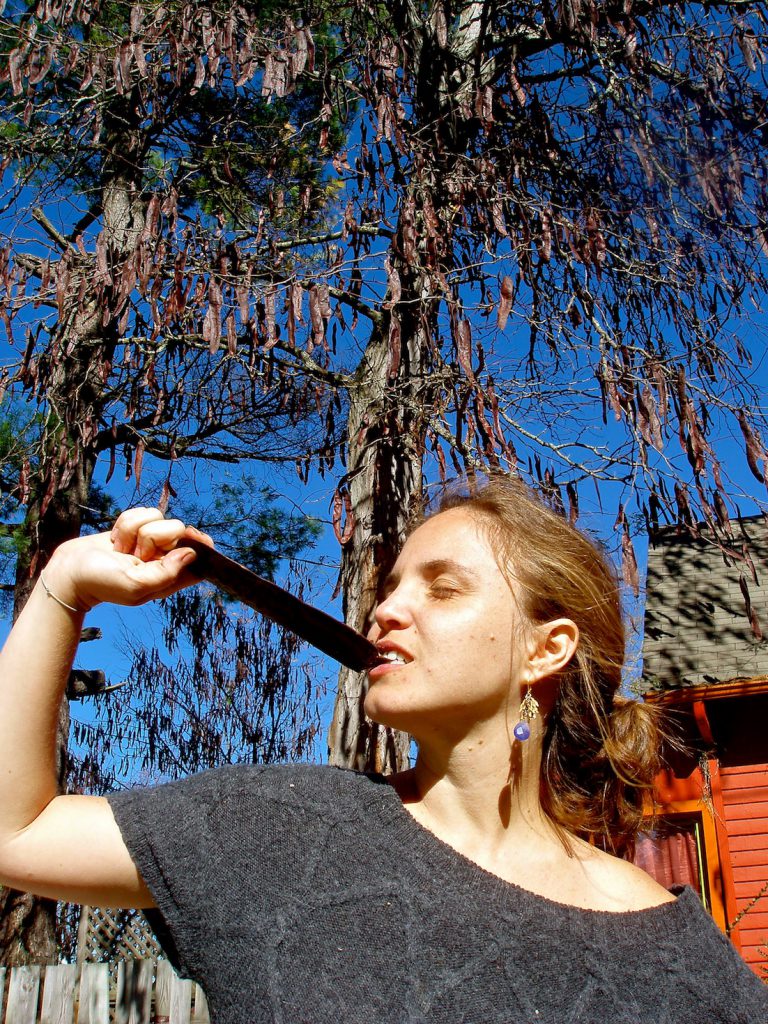 Like most wild foods today, honey locust doesn’t enjoy the notoriety it deserves. It stands a living relic from a bygone era, a memory that lives on. The honey locust is a tree, now relatively rare in most areas, that was once propagated mainly by megafauna like the wooly mammoth. That’s why it has such over-the-top thorns, and why its fruit mostly piles up on the ground uneaten. Our puny Holocenic mammals — including rabbits, deer, and cattle — do enjoy it, but they are not enough to ensure its spread.

Nevertheless, honey locust casts a pleasing shade and is a regular feature of urban plantings (to find one near you, check here). Despite having the claim to fame of being the most common street tree in Manhattan, I find surprisingly little online about the use of its conspicuous pods. Doesn’t anybody wonder why “honey” is in the name?

Related to tamarind and carob, the flavor of honey locust is a cross between both — with a good share of banana thrown in. Feedipedia says “the sweet pulp has always attracted animals and people alike, when better sweets are not available.” Hmm…

There’s no shame in being second, unless it’s being second only to black walnuts for being most likely to be raked up, piled into a garbage can, and carried to the curb. But there’s a reason honey locust can still be found in many areas, and it has to do with people who appreciated it far more than we do today.

To uncover this ancient treasure, first take your neighbor’s “lawn mess” off their hands. Break pods up into roughly one-inch pieces. If they are quite dry, pounding them lightly on a cutting board with something like a mallet helps considerably. The seeds can be left in or collected and roasted for something like coffee. If you have a food processor, you can shred the pieces in it and it will speed up the process, but that’s optional.

Soak in just enough warm water to cover for an hour or more. You can leave it overnight or for days. If it ferments, you can make soda! Then squeeze out the pulp. It’s a fun way to get your hands gooey. A mesh bag helps. Use as is or freeze into cubes in an ice tray for later use. You can cook it down, but expect something more like apple butter than syrup.

Pods more than a few weeks old, whether still on the ground or gathered and stored indoors, sooner or later turn more or less sour. But they can still be used, like a thicker version of lemon juice or vinegar, in barbecue sauces, etc.