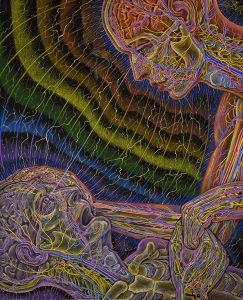 Can you get in trouble for coaching someone while they are under the influence of psychedelics? This article is not about integration services, that is, helping people after they’ve taken psychedelics. Nor does it address what trouble a licensed professional (e.g., a counselor as opposed to a coach) might get into with their licensing board. But my findings may apply to those areas as well.

This article is aimed at those thinking of offering psychedelic-assisted therapy as a service. Keep in mind that I am certainly not giving legal advice, as I am not a lawyer. It’s just what I’ve found so far in a couple hours of internet research. So it’s a jumping off point, and if you find out more, please let me know.

Here are relevant excerpts from my sources below. The short of it is that my impression, unfortunately, is that if you coach someone who you know is on an illegal substance, you are guilty of aiding and abetting and could be charged with the same felony, etc. that the drug user could be charged with.

For info on the profession in general, see “Welcome to the trip of your life: the rise of underground LSD guides.” For my article on psychedelics, see “Midnight Train to Gaia.”

In some jurisdictions, the promotion or idealisation of drug use may be considered illegal…There is an additional concern that, given the nature of psychedelic care services, care givers may be accused of aiding and abetting in the use and consumption of illegal substances. Although this would generally be contrary to the good faith nature of such services, individual care givers should be cautious about their own interactions with participants to ensure that they are not seen to be participating in the commission of illegal acts.

MAPS, “The Manual of Psychedelic Support“

…responsible psychotherapists will decline to provide that care because they understand that doing so risks their exposure to the charge of aiding and abetting the client’s possession of a controlled substance, even though that therapist plays no role in providing the substance.

If a patient decides to avail him or herself to a psychedelic in an attempt at physical or mental healing, the medical professional must be careful with respect to his or her role….

The Ninth Circuit Court of Appeals held that the federal government could not punish, or threaten to punish, a doctor merely for telling a patient that his or her use of marijuana for medical use is proper. However, because it remains illegal for a doctor to “aid and abet” a patient to obtain marijuana or conspire with him or her to do so, the court drew the line between protected First Amendment speech and prohibited conduct as follows — A physician may discuss the pros and cons of medical marijuana with his or her patient, and issue a written or oral recommendation to use marijuana within a bona fide doctor-patient relationship without fear of legal reprisal. And this is so, regardless of whether s/he anticipates that the patient will, in turn, use this recommendation to obtain marijuana in violation of federal law. On the other hand, the physician may not actually prescribe or dispense marijuana to a patient, or recommend it with the specific intent that the patient will use the recommendation like a prescription to obtain marijuana. There have been no such criminal or administrative proceedings against doctors to date.

Scene Z: A Client Requests that the Clinician Provide Psychotherapy in a Session in which the Client has Ingested a Psychedelic…

In Scene Z the risk of aiding or abetting stems not only from what counselors might say, but from their very availability to conduct psychedelic therapy. I contend, however, that under certain defined circumstances involving desperation and dire need, a therapist in Scene Z may be legally and ethically justified in providing psychedelic-assisted psychotherapy. I support this with a Charter-based line of defense, which does not shield a clinician from initial prosecution, but offers the likelihood of exoneration on appeal. A far more desirable alternative, however, is that the therapist use the Charter-based arguments in a proactive court case before rendering the psychedelic psychotherapy service rather than waiting until after he/she has rendered the service and is charged as a criminal defendant for aiding and abetting possession of a psychedelic.

Bruce Tobin, “Communicating With Clients About Therapeutic Use Of Psychedelic Medicines”