Walking Away from Addiction 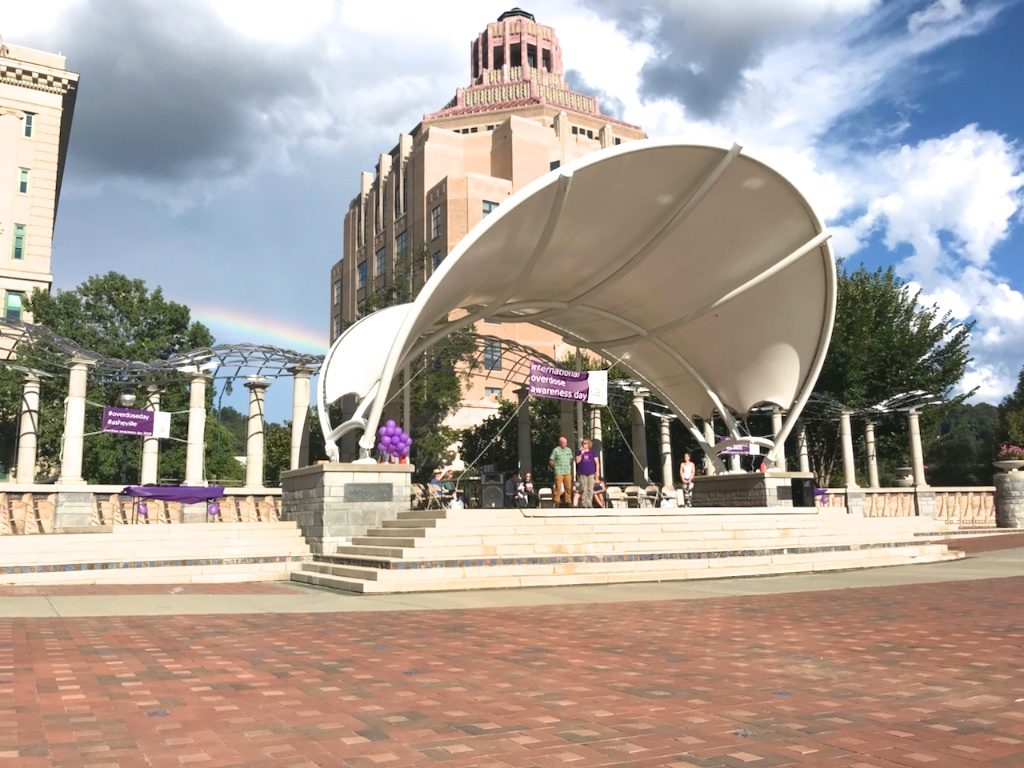 There’s a saying, “if you don’t like the heat, stay out of the kitchen.” On International Overdose Awareness Day in Ashevillle, the people did just that. The event was scheduled on the last day in August, on Friday of Labor Day Weekend, from 5 to 8 PM. Not exactly the time when people most want to face reality.

At 5 PM, most people were just getting off of work. Then there’s traffic to deal with. Even that doesn’t explain why, come 5 PM, aside from those who were working on the event, the grand total of attendees, aside from those who came to support their friends, was not 500 as hoped, not 100 to 200 as expected, but one or two dozen, some of which might have happened to be hanging out in the park already.

By 7:30, about 100 people had come by, including a few who stayed more than a few minutes. The turnout can’t be blamed on lack of promotion. It was advertised on social media, in the papers, and on the radio. I know; I helped put it on. It wasn’t headline news, but there’s no question that at least several thousand people knew it was happening.

There was another problem: it was five o’clock in late August, in a huge, paved pavilion in the middle of downtown. And the stage faced directly west. The canopy offered no protection from the sun, blaring through ozone depletion on the plaza and directly at the stage.

Those who eventually trickled in stayed off to the sides, in the shade. They couldn’t take the heat. The presenters spoke to the sun, to the biggest spotlight you could ever ask for, alone. In the middle of the deadliest drug crisis in American history, you hold an annual Overdose Awareness Day, and practically no one shows up.

When I first heard of Overdose Awareness Day, I cringed. My first reaction was, “eww, gross, boring, depressing. It sounds like something you’re forced to attend in the auditorium in high school. Who would want to go to that?”

The people who get involved with overdose awareness usually have no choice. They’ve already been punched in the face by reality. Either they almost died from drugs themselves, or they had it take away their spouse or their child.

In this culture, addiction is an illicit affair. It comes from denial: denial of its effect on our lives. That’s true of the user and it’s even more true of society. Eww. We turn away. We turn on the TV. We watch drama mediated, packaged into entertainment. But we don’t go see the real thing. Why would we, when just beyond the pavilion, the city was hopping with people lined up to overindulge in food and/or alcohol. When we’re all addicted, when the world is going down the tubes, the last thing we want is awareness.

So of course we stay in the dark. The truth isn’t just light, it’s heat. And it’s too much to bear. That’s why that late afternoon, the only people staring into the setting sun were the presenters. And they got off the stage as soon as they could.

Is there another way?

There were a couple photographers taking pictures. I recognized one. “How do I know you?” I asked.

“I walk my dog past your house.” For close to three years, I’d seen him go by.

I asked him, “did you catch the rainbow?” No, he hadn’t seen it. It was low, as if setting like the sun. I don’t know if anyone else there noticed it. I know I was trying to stay focused on the presenters, trying to reassure them that someone was listening.

If we’re going to solve the addiction problem, we can’t just treat the symptom; we have to address the cause. We have to face each other as we are. Otherwise, all we’ll have left to say is goodbye.

Alan Muskat is Director of Development for SeekHealing, a new local nonprofit healing addiction through reconnection.