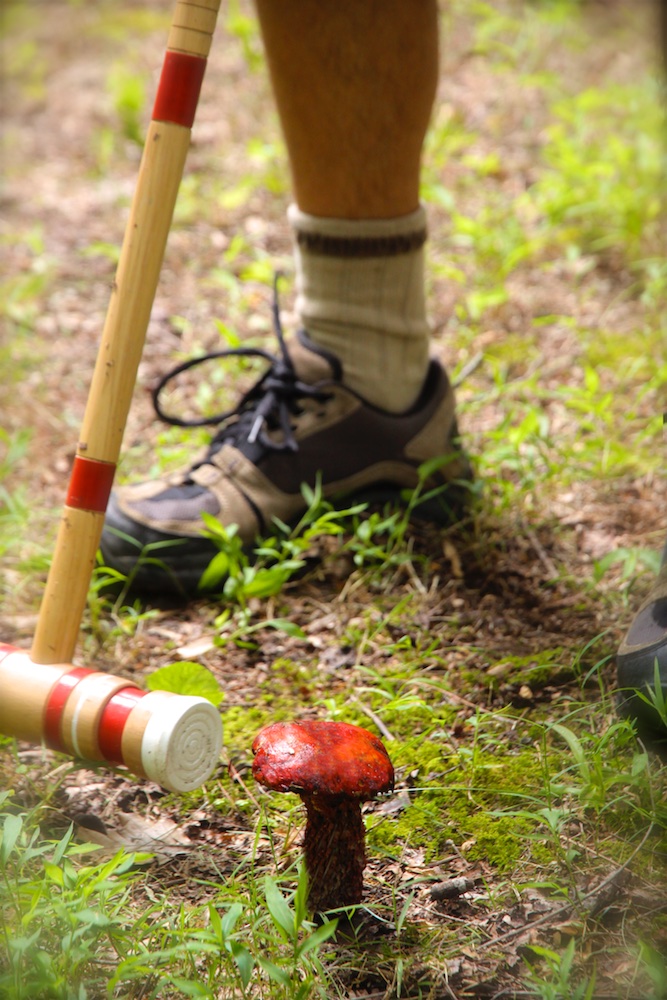 When we try to pick out anything by itself, we find that it is bound fast by a thousand invisible cords that cannot be broken to everything in the Universe.

Most of us see ourselves as separate individuals. This is a complete illusion. Our view of the world is ass-backwards. If that doesn’t change in the next ten years, we are screwed.

I melt with you

One sees clearly only with the heart. Anything essential is invisible to the eyes.

In our modern ignorance, we are just beginning to rediscover our inherent oneness. It is hopefully not too late. Our essential unity is clearly visible in nature, just below the surface. In nature, there is always more going on than meets the eye. Consider a mushroom.

The tip of the iceberg

“The human brain,” says Robert Putnam, “does not develop like a mushroom, hidden in a dark room, all by itself.” Neither does a mushroom. Mushrooms are just the fruit of fungus. Like berries on a bush or apples on a tree, there can be a hundred mushrooms or more sprouting from a single fungus, one that is otherwise mostly invisible, just beneath the surface. The largest living organism on earth, pictured above, is a single fungus in Oregon that makes millions of mushrooms each year. It spans over three and a half square miles and is estimated to be two to eight thousand years old. That’s one humongous fungus.

The second largest creature on earth is another fungus in Michigan. The third is an aspen forest in Colorado. Aspen grow from runners, just like grass.

A little help from my friends 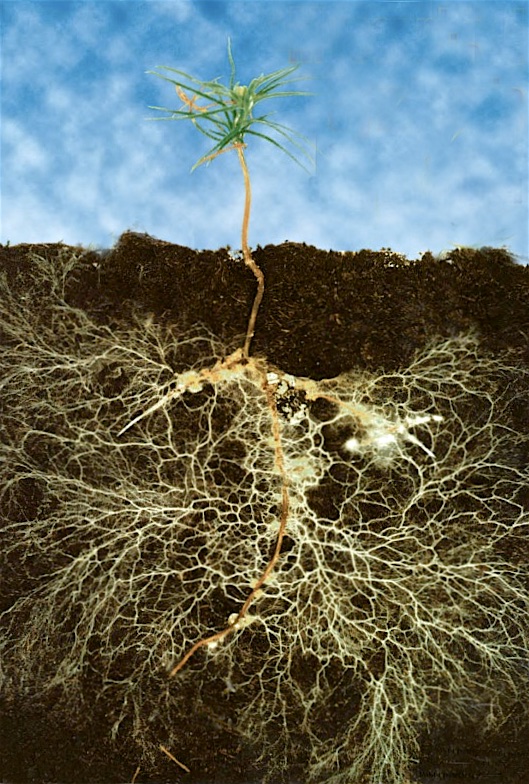 When I would recreate myself, I seek the darkest wood, the thickest and most interminable, and to the citizen, most dismal swamp… The wildwood covers the virgin mould, and the same soil is good for men and for trees.

The iceberg beneath every mushroom is made up of tiny threads called mycelium. Most mycelia live in symbiosis with plants, expanding their root system 100-fold and trading water and nutrients for sugar. Over 80% of the world’s plants depend on fungi for their survival. In fact, this partnership may be what made life on land possible.

Mycelial threads, only a few of which are visible in the image above, are usually only a tenth the thickness of a human hair. In healthy soil, the mycelium running through a cubic inch can be eight miles long. Mycelium can also weave through trees and animals, dead or alive.

Mycelia don’t just connect to individual plants; they connect plants and trees to each other. Mycelia connect trees, not only to others of their kind but to other species as well. The mycelium transports both nutrients and information between them.

The trees in a healthy forest enjoy true, unlimited social security. It’s why a “girdled” tree — one whose ability to feed itself has been severely curtailed — can keep growing, and why a “crowded” forest is actually better off than a thinned out one.

This life support system has been up and running for over 400 million years. It’s local, not global (so far as we know), and only a fraction of the speed of the internet. But good things take time to create — and very little time to destroy. 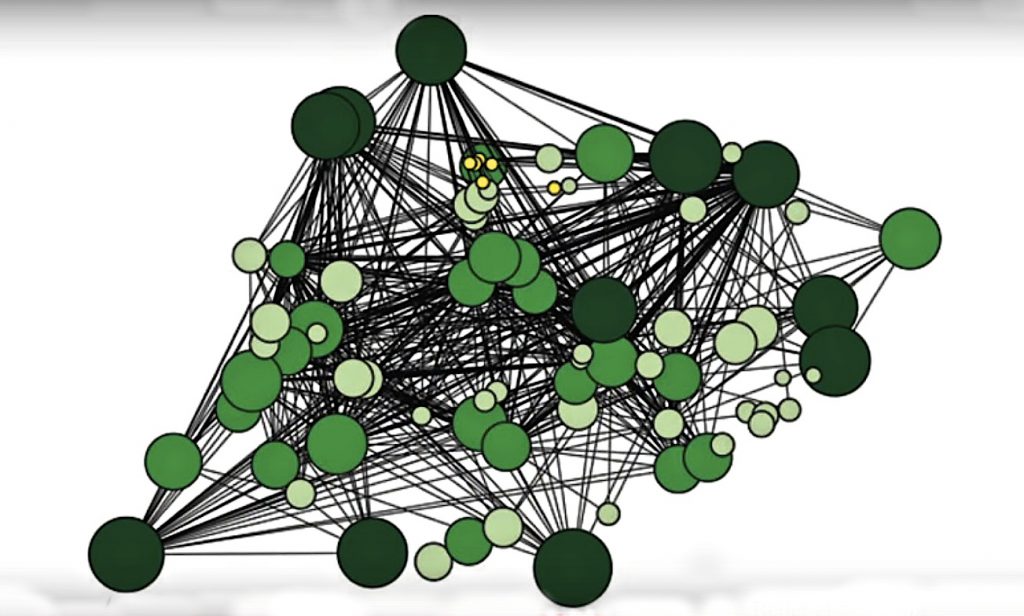 GRACE: “Alright, look: I don’t have the answers yet, I’m just now starting to even frame the questions. What we think we know is that there’s some kind of electrochemical communication between the roots of the trees. Like the synapses between neurons. Each tree has ten to the fourth connections to the trees around it, and there are ten to the twelfth trees… That’s more connections than the human brain. You get it? It’s a network, a global network…

SELFRIDGE: “What the hell have you people been smoking out there? They’re just goddamn trees.”

The above diagram maps out the mycelial connections in a patch of forest in British Columbia. The circles are trees, and the largest, darkest circles are the most connected. These correspond to “hub” or “mother” trees. Not surprisingly, these are the oldest trees in the forest. They literally nurture and even appear to “teach” the younger trees around them.

You might think that when logging, it’s best to just take the oldest trees and leave the rest to grow. But in actuality, if you take only the younger trees, the forest rapidly recovers. If you take away the elders, on the other hand, the community falls apart. It is the elders that know we’re all connected. They live that connection. They know we would die without it.

The greatest love of all 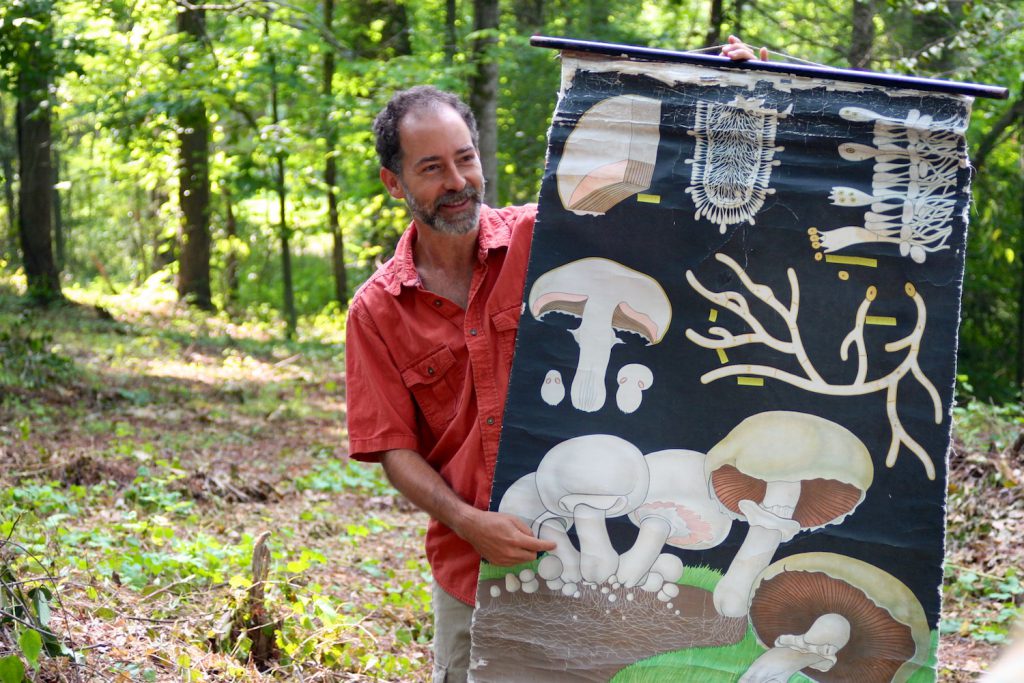 Robert Southwell wrote at the height of the witch hunts. Without the old wise women to keep us grounded, entire empires were destined to rise and fall. And not much has changed. We look up to skyscrapers while the true power lies beneath our feet. Large and in charge, fungi are not only most likely to have been the first life on land, one could say they invented trees to give themselves some shade. They decided long ago, better to grow in anyone’s shadow. 😉

When I tell people that the forest is all connected in this way (as are more open areas), I ask them, “what do you think happens when one tree gets sick?” The first thing people invariably say is, “the trees around it get sick too.” Only 5% of the time does someone say, “the other trees help it.” But that is the truth. That is how the forest survives.

No less than 20 to 80% of the sugar a tree generates goes into the mycelial network. This sugar is distributed to the trees that need it. How’s that for a tax rate? Remember that this system goes both ways: each tree supports the system and the system supports them. In fact, the tree could not exist without it.

In our culture, we’re taught to look out for #1. But there is only one. A worldview like ours can only end in failure.

How can I help you? 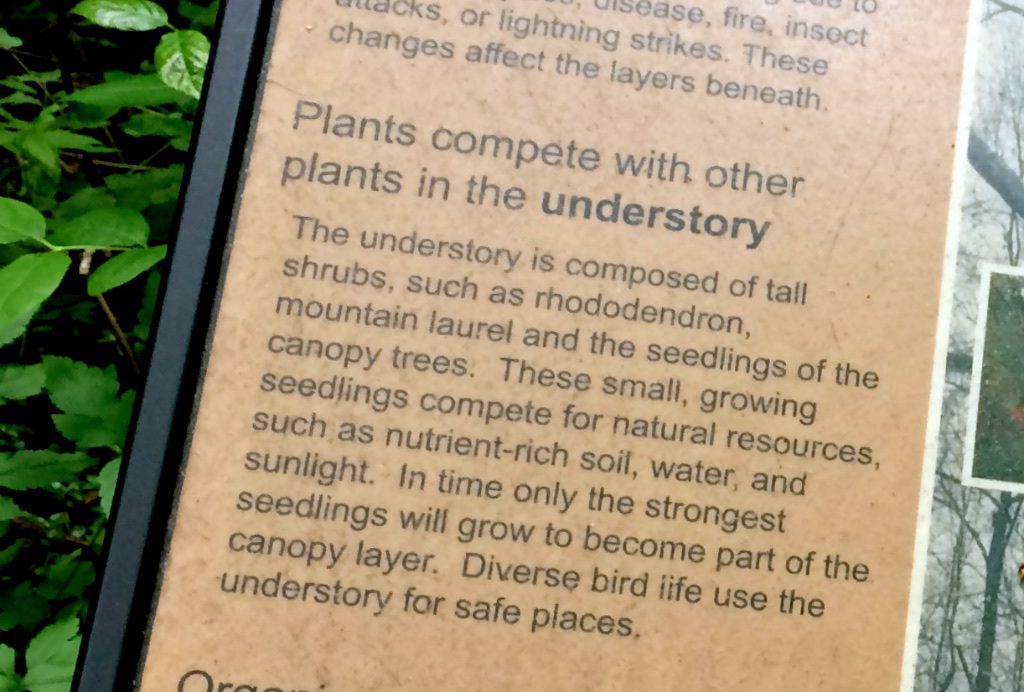 The basic premise of capitalism and, for that matter, most of human civilization, is that this is a dog eat dog world where it’s every man for himself. If that were true

it would mean that existence is not one and harmonious but a chaos of competition and strife. It would mean that we are quite separate from our fellow man and could injure him, rob him, or hurt him, or even destroy him, without any damage to ourselves, and, in fact, that the more we took from other people the more we would have for ourselves.

It would mean that the more we considered our own interests, and the more indifferent we were to the welfare of others, the better off we would be. Of course, it would then follow naturally that it would pay others to treat us in the same way, and that accordingly we might expect many of them to do so.

If this were true, it would mean that the whole universe is only a jungle, and that sooner or later it must destroy itself by its own inherent weakness and anarchy. But of course it is not true, and therein lies the joy of life.

Today, we hardly take it as a matter of course that the world is harmonious. In fact, we assume quite the opposite. We look on the surface of things, through the lens of our fragmented worldview, and see only competition. We live in fear, in “scare-city.” But things have not always been this way.

We did not think of the great open plains, the beautiful rolling hills, and the winding streams with tangled growth as “wild.” Only to the white man was nature a ‘wilderness’ and only to him was the land ‘infested’ with ‘wild’ animals and ‘savage’ people. To us it was tame. Earth was bountiful and we were surrounded with blessings of the Great Mystery.

Not until the hairy man from the east came and with brutal frenzy heaped injustices upon us and the families we loved was it ‘wild’ for us. When the very animals of the forest began fleeing from his approach, then it was that for us the ‘wild west’ began.”

Oh baby, it’s not a wild world. The jungle is not lawless. There was a time when even white people saw “the joy of life,” when we still recognized our own family. She’s not called Mother Nature for nothing.

The finger wagging the hand

Fungi bond trees so intimately that the more you learn about them, the more it is a struggle to view any tree as an individual. Forest trees and their root fungi are more or less a commune in which they share resources in a fashion so unabashedly socialist that I hesitate to describe it in detail lest conservatives reading this go out and immediately set light to the nearest copse.

Ironically, it’s when we’re disconnected from our true nervous system that we get really nervous. When we lose this universal health care, our mental health goes with it.

On October 24th, 2016, long after Bernie Sanders had lost the Democratic presidential nomination, a close relative of mine sent out a group text. “I hope that you, your friends and acquaintances will vote Republican. We need to STOP the probability of this country becoming socialist/communist. Vote for Trump.”

That sentiment now leads the country.

From we to me

Many of us live in isolation, whether real or imaginary, and our mental disconnection breeds paranoia. Meanwhile, the more “progressive” among us point out that the mycelial network illustrates cooperation. It does not. The very idea of “cooperation” is based on an individualistic worldview, one that is completely backwards. We are not separate to begin with.

Mushrooms, remember, are just the reproductive parts of a fungus. Thinking of a mushroom as an individual, then, is like thinking of somebody’s gonads as a person. Is relating to humans as individuals the same thing? 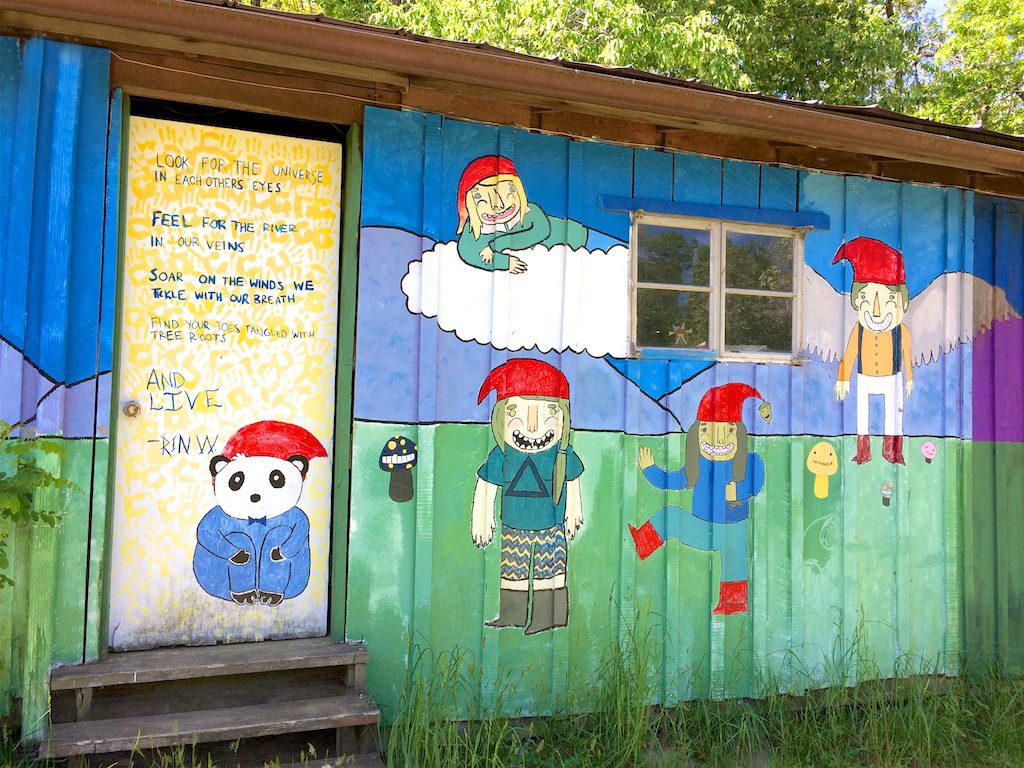 If you think you are a mushroom, jump into the basket.

In life, there is always more going on than meets the eye. I’m not asking you to turn a blind one to violence and exploitation, both in human society and the animal world in general. But that’s not all there is. It’s not even the bulk of it. Even germs work in unison.

The real world is a matrix, one that is not only integrated but benign. This invisible unity is often revealed through psychedelics, and one glimpse of that unity that can be immensely healing.

You don’t have to take mushrooms, however, either psychedelic or from the woods, to get what they have to teach us. My late colleague Frank Cook used to say, like his teacher before him, “if you think I’m a good teacher, that doesn’t mean you want to cut me up and eat me.”

The lie that the world seeks to destroy me is replaced with the truth that the land is conspiring to give me life.

We are a sick species. We are on our deathbed. Fortunately, our ass is grass. The cure is everywhere, and it’s free. It’s called friendship.

You don’t have to think about what a friend is good for; you just like being around them. A friend or loved one helps you in innumerable ways — or rather, just one basic one: they love you.

The natural world loves you. Is that so hard to believe? Do you not love yourself?

Alas, we don’t. We are not doing the easiest thing, the real thing. And if we don’t do it soon, we are really screwed.

We need to see past our current, illusory view of the world and ourselves — mostly the “and.” No ifs, ands, or butts.

Our ass is on the line. 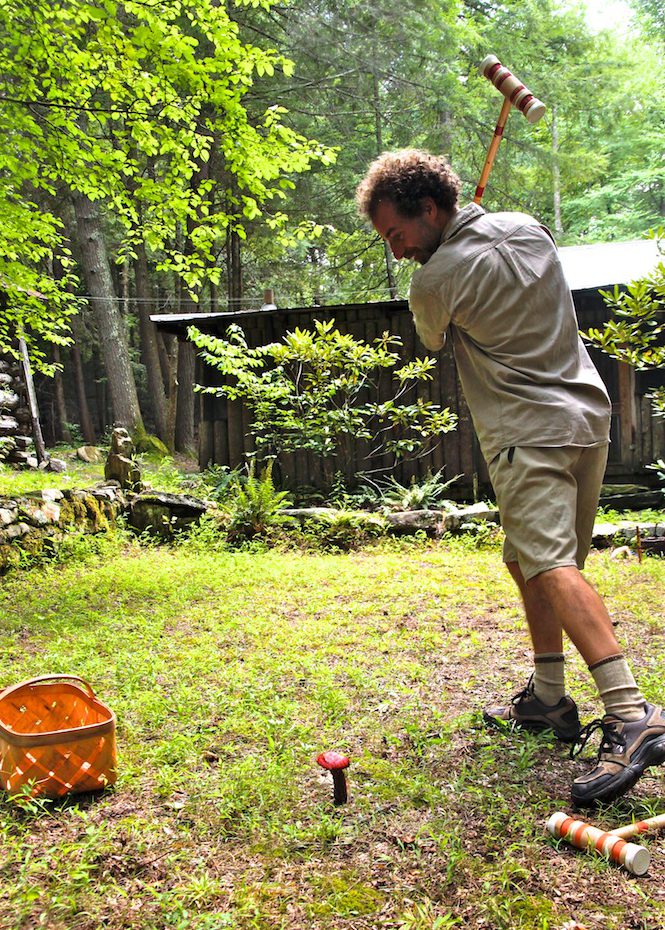