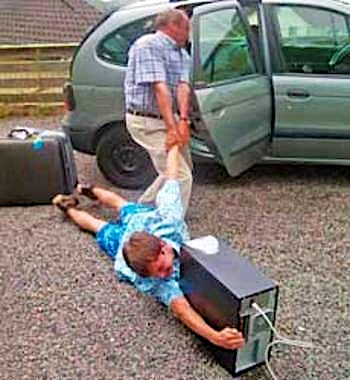 When once the itch of literature comes over a man, nothing can cure it but the scratching of a pen.

My computer has this problem: whenever it goes to sleep, it crashes. I have the same problem. As long as I’m working, I’m fine. But that’s like saying, as long as I’m snorting coke, I’m OK.

One of my heroes has a photo on his wall of John Wayne. Wayne’s in his classic role of the tough cowboy, and he’s got six arrows in his side. Beneath the image lies the caption, “it only hurts when I laugh.” If anyone ever hangs up a photo of me, I know what the caption will say. “It only hurts when I get off the computer.”

You see, I write for a living. If I ever get famous for it, it’ll be a consolation prize, and little consolation at that. Like most successful starving artists, I’ll probably be dead.

The problem is that what I’ve chosen to do with my life is the very thing that is most likely to kill me. I’m addicted to sitting in front of the computer, and I’ll do it for hours on end. I don’t get tired. I just get cranky. That’s because I did get tired (or hungry) hours before; I just ignored it.

When I’m on the computer, I might as well be in it because I’m not in my own body. If I don’t shape up, however, something worse will happen, worse than six arrows in my side. It’s happened once already. Two years ago, I passed two kidney stones.

Kidney stones are said to hurt worse than childbirth. They are born, in part, from a sedentary lifestyle and from workaholism: from not even stopping to take a drink of water. And once you’ve had kidney stones, there’s a three in four chance you will have them again.

In 2006, I reached out to a friend for help. I even started a center so he could help not just me but others like me. That’s a rather involved way to get help, but a roundabout way can be more about avoidance than approach. This friend once said, “that’s one thing about Alan and his commitment to personal growth: as soon as he recognizes something he needs to work on, he doesn’t hesitate to write an article about it.” You’re reading one right now.

The school I started is called The REAL Center. The “REAL” stands for “Relationship, Embodiment, and Awakened Living.” People come and talk about their problems. I’m not very involved.

They say talk is cheap, but writing is even cheaper — at least for a while. If I don’t wake up, stop working so much, and stop avoiding reality, I will be painfully reminded once again that (1) I have a body, and (2) my first occupation is to occupy it. My job is not to read or write about being in my body but to actually spend more time there. And that’s the last thing my ivory tower mind wants to do.

To spend time in my body sounds so painfully boring, like pushing toy trains around with a toddler. The truth, however, is that it’s not boredom I’m avoiding but pain itself. For forty-five years, I’ve been running, running while mostly sitting still. I’ve been running from some original pain that as a child, I found too much to bear.

Ironically, most of the pain I’m avoiding now is just what has accumulated from years of neglect. The more you cover pain up, the more you create. I’ve swept a mountain under the rug, and now there’s no way around it. Thankfully, I’m learning how to clean house.

I’m sure you’ve heard that all before. You might own a pile of self-help and spirituality books. You may also have noticed that buying a book about something is not the same as doing it. Neither is writing about it.

If I starve, then, it won’t be for lack of food or money. It will be because my main occupation in life has been to avoid it. Fortunately, I’ve found two great tools for saving my own life. The first is Nonviolent Communication, or NVC. NVC is less about how you talk to others than how you talk to yourself. It’s even more about whether you listen. Your self is your body, and it talks through your feelings. You are being violent with yourself when you force your body to do things, and you do that when you refuse to listen. We don’t listen when we’re afraid of what we’ll hear. Indeed, the only thing we are ever afraid of is to feel our feelings.

With that in mind, the second tool I’ve found immensely helpful is Somatic Experiencing, or SE. SE is a type of trauma therapy. In this culture, we are all traumatized. We’re traumatized because we’re socialized not to listen to our bodies. The word somatic means “relating to the body,” and that’s exactly what I’m re-learning to do. If I spend all week afraid, however, hiding out in electronicland, I’m not exactly doing my homework. I’m just going through the motions if I’m not going through my emotions. To do that, I need to do the kind of doing that is more like being — specifically, being in my body.

With these two tools, I’ve actually come a long way toward taming my computer addiction and coming back to life. My “hero” with the photo of John Wayne, by the way, is the founder of NVC. I think I’ll put a photo of him above my computer. Or maybe I’ll just make it my screen saver…