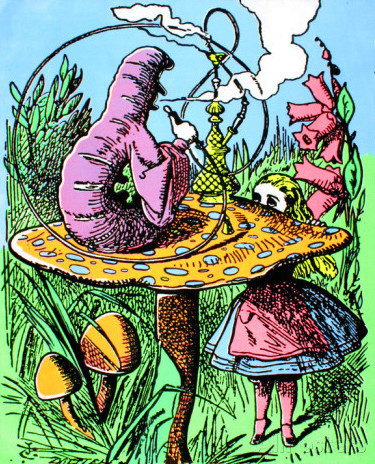 For an updated and much expanded version of this article, see
“Midnight Train to Gaia“
Alice remained looking thoughtfully at the mushroom for a minute, trying to make out which were the two sides of it; and as it was perfectly round, she found this a very difficult question.

If any mushrooms are going to save the world, it’s the psychedelic ones.

I highly recommend the 2013 documentary, Neurons to Nirvana. The special effects are a bit too “psychedelic” for my taste, but the point of the film is important: psychedelics can potentially not only cure depression; they can change the course of civilization.

Today, nearly one in four Americans will experience depression by the time they reach age 75. In December of 2014, Time reported that 65% of people with severe depression are not getting treatment. Initial research shows that for many people, when properly administered, psychedelics could be of tremendous benefit.

The other thing to keep in mind is that psychedelics are not for everyone. Drug reform is not about prescribing another “magic pill” but shifting our whole culture to accommodate these experiences. Changing our thinking takes work, both individually and collectively. Psychedelics only give us a glimpse of the goal; it’s still up to us to get there.

True spirituality is not a high, not a rush, not an altered state… Authentic spirituality is not some little flicker or buzz of knowingness, not a psychedelic blast-through or a mellow hanging-out on some exalted plane of consciousness, not a bubble of immunity, but a vast fire of liberation, an exquisitely fitting crucible and sanctuary, providing both heat and light for the healing and awakening we need.

If we want mushrooms or plants to help us grow, we need to respect and appreciate their tremendous power to do so. Then they just might save us.