It’s Not Easy Being Green

In 2013, Google’s search page on Halloween featured a typical image of a witch: green, old, and evil. A little magnifying glass to the bottom right of the image linked to an article about witches. The piece spelled out half the truth: witches aren’t really evil. It left out the other half.

There is something scary about witches, but it’s not the witches themselves. It’s how, over the last few hundred years, we’ve all but lost our sense of family, and with it, our access to universal healthcare and local, healthy food.

The wicked witch stereotype has cheated us out of healthcare that was not only affordable but FREE. It was free because our healthcare provider was our own grandmother. Our grandmothers were herbalists, which is what a witch, with her “magic potions,” really is.

From ancient times until about five hundred years ago, our elders — particularly our grandmothers — were our family doctors. They never had to make house calls because they lived in the house. The care they provided was local and sustainable. Like the Halloween witch, it was green. 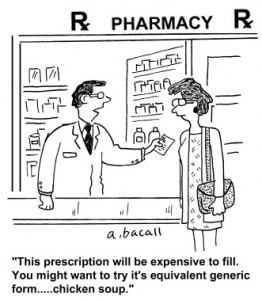 Before factory farming and factory pharmaceuticals, our grandmothers were our caregivers. They were both doctor and dietitian because our food was our medicine.

I try to recover some of that lost tradition. I teach about wild — i.e., natural — food. Thanks to modern food and medicine, it’s difficult to convince people to go back to nature. Today, we think wild food is dangerous. What’s dangerous, however, is what we’re eating instead. The Safeway is not so safe.

The crone is close to death, and in a culture not ravaged by senility and other degenerative diseases, she knows a lot more than we do because of it. Grandma didn’t push drugs, whether in pills or junk food. Today, the third leading cause of death in the United States is our own medical system. As we’re learning the hard way, it’s not father that knows best.

Of course, medical science has led to considerable advances. There were certainly superstitions and “old wives tales” to dispel. But the trade-off has been great. Statistics show that today, you and I are far more likely to fall prey to a “lifestyle disease” like diabetes, obesity, and tooth decay, even in youth, than when our healthcare system was run — and our food choices governed — by witches.

The forces that fed us this foul image of the witch are now working on taking local food from us as well. Wild food is already a non-issue: for most of us, eating from the wild — that is, from nature — would be like taking apples from witches.

Where did this image of the witch — along with our mistrust of nature and of natural medicine — come from? From the church to mass media and mass education, the concentration of power in the modern age is a long, eye-opening story. 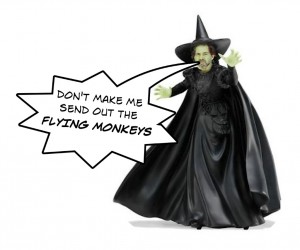 The link I followed from the Google doodle led to an article in The Christian Science Monitor entitled, “Halloween witch: The real history behind Google’s doodle.” What really caught my eye was the tag line: “She’s mean, she’s green, she’s… persecuted throughout history?” It just so happens that the wicked witch from The Wizard of Oz was, indirectly, the inspiration for the name, “No Taste Like Home.” So I read on.

What followed seemed to me to be a pretty good article, one acknowledging the awful reality of the witch hunts in the Middle Ages, when tens of thousands of women were tortured and burned at the stake. It’s interesting how Google prolongs the negative stereotype while providing an optional debunking of it — if you bother to look. Given how seldom people even read anymore, this seems like a poor excuse. 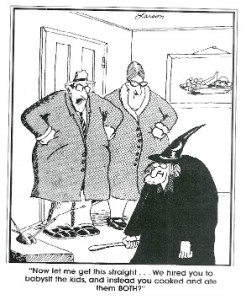 It’s important to see witches more favorably, not only because thankfully, a few still exist, but because this unfriendly image is a demonization of old women in general (see Barbara Walker’s The Crone). And what better way to take something from someone than to get them to discount, dislike, or dread it. Like modern witch Starhawk teaches, “where there’s fear, there’s power.”

As the Christian Science Monitor article points out, witches originally were herbalists. They still are. I’ve learned most of what I know about medicine from them.

This spring, my girlfriend and I were gathering wild daisies in a  pasture. The common wild daisy, Chrysanthemum leucanthemum,  is both edible and medicinal. What exactly is it good for? I don’t know, and I don’t need to know. If I just eat it, it will prevent whatever it’s good for.

When we arrived, we knocked on the door of the nearest house, but no one was home. Since the meadow had thousands of daisies waving in the breeze, we figured the owner wouldn’t miss a few. 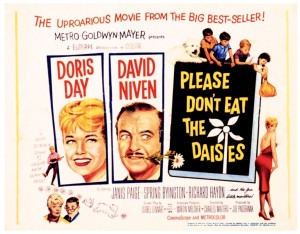 A most-pleasant half hour later, a man in a pickup truck came up the driveway. He stopped short of the house and watched us. Since he looked like he was just making a delivery, I pretended not to notice. But soon we were done; we needed to get back to the car, and it was parked right next to the truck. As we walked up, I broke the silence.

“Is this your place?”

“Daises.” I let my resident healthcare provider explain what they were good for.

He paused for a moment, then said, “you come back and help yourself. My granny was an MD: a mountain doctor. I never paid any attention to what she did or said, but I wish I’d learned from her now.”

This reminds me of a riddle I learned as a child:

A father and his son were involved in an auto accident. They were rushed to the hospital and the doctor on duty was called in. As soon as the doctor saw the boy, the doctor said, “I can’t work on that patient; that’s my son.” How is that possible?

People give all kinds of answers, like the son was actually adopted to the mother cheated on the husband and the real father recognized the son. Few people gave the much simpler, correct answer: the doctor was a woman. 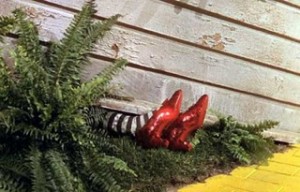 Traditionally, the healers in Europe were women, particularly old women. For thousands of years, old women and medicine went together. It took a lot of violence to separate the two, and money was surely one motivation to do it. The witch hunts paved the way for the male-dominated medical profession.

Modern medicine, like most of our civilization, was built over the broken bodies of not only witches (and those who tried to defend them) but indigenous people everywhere. For more information, read Witches, Midwives & Nurses: A History of Women Healers (full text of first edition here). 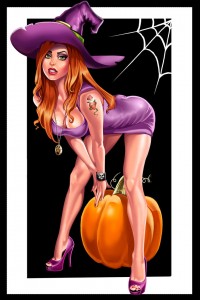 There’s a lot of pain and injustice, then, behind a caricature that today we might think is “cute.” That past is largely buried and forgotten. To add insult to injury, today we have the sexy witch costume. Now even little girls are wearing them. This helps to explain how the witch hunts are still going on, as we shall see.