Even after all this time, the sun never says to the earth, you owe me.
Look what happens with a love like that: it lights up the world.

Can the planet support 10 billion people? Does God exist? Those questions are related. I’ve got answers to both. I can’t convince you of either one. This is just what I believe.

I believe that we can feed our current and future world population if we shift to the practice of permaculture. Permaculture is a cross between farming and foraging. It means working with nature, not against it. And I believe in God. Here’s why.

The root of all evil isn’t money; it’s fear of life. Civilization suffers from biophobia. We believe we live in an unfriendly universe. We believe in scarcity, so we live in Scare City.

Fortunately, scarcity is a figment of our own economic system. As soon as you start charging for things, suddenly there’s not enough for everyone. What there’s really not enough of isn’t the resources but the money used to exchange them.

The fear of scarcity breeds insecurity, struggle, hoarding and competition. Fortunately, this fear is an artificial construct, an illusion. It comes largely from having to pay for things that, until recently, had always been free. One of these new expenses is food.

We haven’t always had to pay for food. Like clean water, it used to be free. The people we call “primitive” today lived in a gift economy. They didn’t charge each other for things because Nature didn’t charge them either. 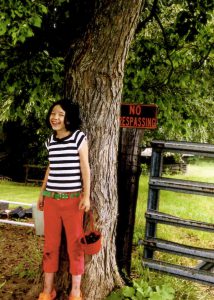 Say, can I have some of your purple berries?

When your food, shelter, health care, child care, entertainment — in short, everything —comes as a gift, you can indeed live on “less than $2 a day” and yet not feel poor. Modern people can reclaim some of that abundance through sharing: not just renting out what you own but true sharing. We can also partake of what Mother Nature has to share, free of charge: the freshest, finest, all-natural, organic food that money can’t buy.

The nature of ancient hunter-gatherer societies has been highly contested. How did they live? How did they feel about it? For the most part, nobody knows. I have been foraging for about half my food for over twenty years. Here is what I’ve discovered.

Here’s one account from a French missionary to present-day Quebec in 1634:

In the famine through which we passed, if my host took two, three, or four beavers, immediately, whether it was day or night, they had a feast for all neighboring savages. And if those people had captured something, they had one also at the same time; so that, on emerging from one feast, you went to another, and sometimes even to a third and a fourth. I told them that they did not manage well, and that it would be better to reserve these feasts for future days, and in doing this they would not be so pressed with hunger. They laughed at me. ‘Tomorrow we shall make another feast with what we shall capture.’

Descriptions like this and others (see above link) suggest that nature-based peoples didn’t think they lived in a “dog eat dog” world. They seem to have lived the Bible’s teaching without ever having read it:

Do not worry about your life, about what you will eat or drink… Look at the birds of the air: they neither sow nor reap nor gather into barns, yet your Heavenly Father feeds them. Are you not of more value than they?

The basic question here is whether The Garden of Eden was real. That may sound fruity (pun intended), but anthropologists are in pretty universal agreement about one thing: if you add up the time we spend at work plus our time spent on cooking, cleaning, shopping, maintenance, taxes, etc., the hunter-gatherer societies we can observe today work far less than we do. That is, if you even consider hunting and gathering “work.”

Meanwhile, most of us are pinching pennies to make ends meet. Which of us is, to borrow from Bob Dylan, having to be scrounging for their next meal?

Some anthropologists claim that hunter-gatherer societies are not only more cooperative but far more playful than our own. Our economy is predicated on healthy competition, and surely there’s a place for it, just as in any sport or game. But life is no longer fun and games when we feel threatened. Do we really need to feel threatened?

When you take this question to the extreme, you have to wonder, is the universe friendly? Is life even worth living? These are very relevant questions, very real doubts that many people have today. More than one in ten Americans are now on anti-depressants. More people are dying of suicide than in car accidents.

Nature-based cultures don’t seem to have these issues. You could say they live “in the palm of God’s hand.” They seem to enjoy a genuine home-land security. Whatever you call it, their incomparable health and well-being speaks for itself. Which of us, then, lives in the “real world?”

Our world is largely artificial, that is, man-made. We have bred scarcity in our food by selectively breeding crops. One study, for instance, found that on urban farms, two thirds of the plants considered “weeds” are edible. In fact, these “weeds” add up to no less than 40% of the food available. This means that almost half the food on a farm goes uneaten.

We have narrowed the range of what we eat, and our health has declined accordingly.

We have bred scarcity with our thinking. Once you decide — or the media tells you, and you believe it — that only certain things can make you happy, you narrow your chances of satisfaction considerably. Competition, stress, bigotry, and even war have all come from this “selective breeding.”

The pervasive anxiety that results from this narrowing is endemic to civilization. It has certainly curtailed my own life. Growing up, I thought I was smart. After all, I went to Princeton. Fast-forward two decades and I’m dishing out $3000 for dental work resulting from a lifetime of bruxism, silent GERD, and other symptoms of chronic stress.

I grew up in a suburban Jewish family with a long history of hypervigilance and the worship of money that results from it. I too am a product of fear. Is that fear justified? It doesn’t matter how hunter-gatherers live — or lived — if that way of life is no longer an option. Is it? Can there really be enough food in nature for 10 billion of us?

First off, let’s acknowledge that if you would even consider that a hunter-gatherer lifestyle might actually be preferable, then you’ve already called into question the first major premise of civilization: that the last 5,000 years have been unequivocal progress. Could the idea that “there is no Garden to go back to” be just a myth as well?

Of course, we can’t all forage anymore. But we can’t continue what we’re doing now either.  The solution is neither foraging nor agriculture; it’s permaculture. Permaculture means working with nature, not against it. It means growing — or rather, managing — what thrives in an area on its own: in other words, what grows wild.

I believe that we live in an abundant universe. I believe that there is a Garden that we can rebuild, and it can feed us all  — sustainably. It’s time to wake up from the nightmare. We have an Eden disorder, but it’s not incurable. We can turn this world around when we see it for what it is.

“To the student of Zen,” says Shunryu Suzuki, “a weed is a treasure.” That treasure lies hidden in plain sight. Weed it and reap!

Experience the real world. Go off the eaten path. To free yourself, rewild yourself. When you “go by the graze of God,” you rediscover Providence. You find that life is good after all. When you eat outside the box, it’s not just the food that’s wild and free.

It’s not too late. Like Keats says, “the poetry of Earth is never dead.” Life goes on, like the sun. We may have been prodigal, but all is forgiven. Like clear air, the crystal waters, and the mothers who catch our tears, Earth nourishes and receives us without exception. She waits for us with open arms, for us to come home.