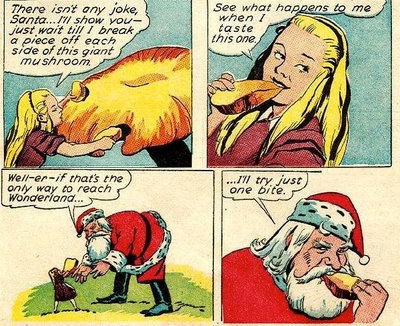 What if Christmas doesn’t come from a store?

In 1957 Gordon and Valentina Wasson published Mushrooms, Russia, and History. Their famous article in Life magazine, the one that revealed psilocybin mushrooms to the world, was simultaneously released, but only 500 copies of the book were ever produced.

For many years I’ve known of this two-volume tome, the first book on ethnomycology in the English language, and have been interested to read it. I’d see charming lines from it like this one:

What a delight it was to ramble through the clean, fragrant woods, filling our baskets… When I was almost eight and my sister was nearly seven, we were already proficient mushroom gatherers…When we were naughty, our mother would punish us by forbidding us to go mushrooming.

However, copies of the rare treatise sell for thousands of dollars. I knew that sooner or later someone would scan it. Well, someone finally did. The day before Christmas, a new friend sent me this link to a free PDF of it. Sure enough, it begins with these words:

This book is addressed to those who love mushrooms, who love the whole rich world of wild mushrooms in the same way that many love the flowers of the field and the birds of the air. Our public is certainly one of the smallest in the English-speaking world, but no matter. We invite all to share our joys, and if few respond, we are not less happy for being few to savor the secret…

As an added bonus, I was very pleasantly surprised to find that the illustrations are by Jean-Henri Fabre, whose studies of the tiny lives of insects are also a delight to read.

In 1995, the year I moved to Asheville, I read the Wassons’ second book, Soma. I always chauvinistically assumed that Soma was mostly Gordon’s writing, but in this book at least, according to the Preface, the writing is actually Valentina’s. And that makes more sense, after all; she is the Russian in the family. From the first chapter:

The Russians never discuss the weather to make conversation, and our lack of interest in golf scores and sporting events generally, both amateur and professional, is complete. But mushrooms are different. They are not only raw material for the kitchen, they are a theme for endless discussion. They are everpresent in our minds, even when we are not discussing them.

Soma was published in 1968, the same year I was “released.” It’s all about the fly agaric, Amanita muscaria, which I like to consider my namesake. Muskat is the name of a grape, but that name may have been derived from musca, which means “fly,” as in Superfly. More likely it comes from testicle.

Anyway, the book argues that the fly agaric was a sacrament sacred and central to the ancient Vedic religion. Similarly, later authors have asserted that much of the iconography of Christmas may derive from Siberian shamanism — with reindeer and everything.

Anyway, that year I gave a talk on all this to the Asheville Mushroom Club. I had to stop at two hours though I could have gone on for four (but enough about me!). It was that same year (not the same day) that I first experienced our more common “soma,” Psilocybe.

That was all sixteen years ago. It’s unusual in recent years for me to pick up a book on mushrooms. I can’t say they’ve been always on my mind. Lately, I’m more interested in somatic awareness. But it was my own encounters with soma that started this long journey back into my own body so long ago. Thanks to a new friend for reconnecting me with an old one.

In a reciprocal process, the more one is in contact with one’s own inner world, the more he or she will establish connections with the sacredness of the outer world. And it is only by becoming a part of the sacredness of nature that one may unearth one’s spirituality.