Teaching this Man to Fish 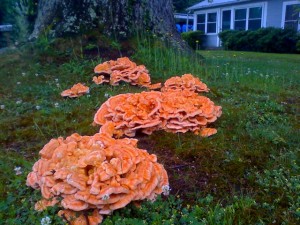 Here is — or was — a chicken of the woods in a neighbor’s yard a block away. I first found it on my birthday last year (the two photos are of the same mushroom in different light). I remember being afraid of asking the homeowner whether I could have it for fear of him saying no. When I did finally ask, he even helped me harvest it and carry it to my car.

The average-size chicken of the woods is about fifteen pounds. This one weighed fifty. I sold it to a number of restaurants for a total of $750. 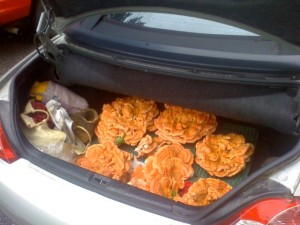 A mushroom is only the fruit of a fungus, and so, two weeks ago, exactly a year later, the fungus began to fruit again.

I was looking forward to serving it at our next wild foods banquet. I knocked to ask the homeowner, “please don’t mow down that mushroom!” but he wasn’t home. I meant to go back the next day. It was just a short walk from my house, but I was too preoccupied with No Taste Like Home to even take a walk. Days went by. 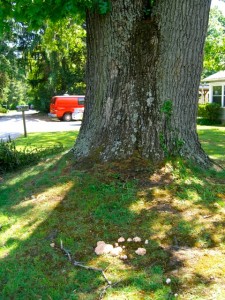 Five days later, there was a sudden downpour on my way home from a meeting. My housemate arrived shortly after I did to say a massive tree had fallen and crushed a house. Again I was too busy to go check it out. He mentioned it again the next day. I finally went to check on the mushroom a day later, only to find…

The mushroom had kept on growing. Now it was dead and trampled, right on the “fault line” where the ground broke. 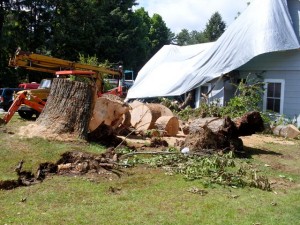 It had been feeding on the inside of the tree.

I knew this is what these mushrooms do. Chicken of the woods is a saprophyte. That means it eats dead things. A tree is not technically dead, but the inside of it is. So many times over the years, I’ve taught that a tree like this can look perfectly fine on the outside and yet be hollow on the inside, having lost its internal stability. One day, it rains too hard too fast, and… 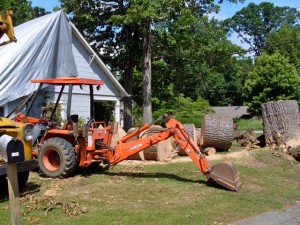 It hadn’t occurred to me to warn my neighbor. I still don’t know if any people were hurt. All I was thinking about was the mushroom.

It was a poignant lesson for me about what’s really important. I spend so much time on the computer, working on the future, building on the past, when it’s being present that really matters. First of all, it’s being present that really pays off. So many times I’ve found that going out to a party and socializing will actually do more to land me a job than staying home and sending out resumes. The point is to put yourself into the flow of life. You do that whenever you get out, especially when you travel. After all, that’s how I first found this mushroom. 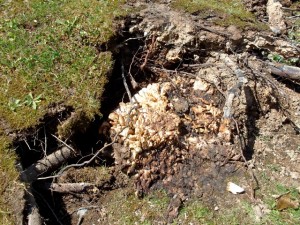 Even more important is to get “in,” i.e., to be present to what’s going on inside. There can be something there that, when unattended to, can eat away at us until all our stability, our structural integrity, is gone. Then, like The Tower card in the tarot deck (see image below), it’s just a matter of time.

I have spent so much of my life building what I call one “Tower of Babel” after another, the once-and-for-all Solution, instead of attending to what really matters: my relationships to others, to my body, to myself. 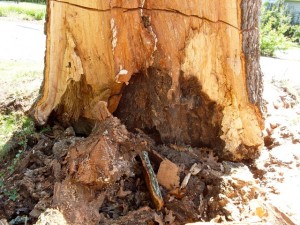 This isn’t to say the tree did anything wrong either or that there’s anything wrong with dying. The point is to live while we’re alive. If I had had a relationship with my neighbor, I probably would have gotten around to warning him about the tree. Maybe we could have come to an agreement where he cut it down and left the stump. The mushroom would continue to grow and fruit for several more years. We could split the money I’d make from selling it. His half would have paid for the tree work; my half would have kept me from worrying about whether No Taste Like Home will be successful. 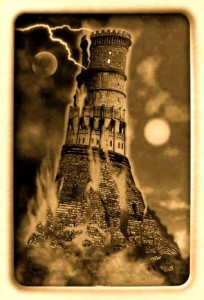 Sometimes the lesson is worth more than the mushroom. In all my years of mushroom hunting, I keep coming back to one word: community. That, like everything else, comes from staying present. And staying present is what No Taste Like Home is really about.

UPDATE, 11/13/12: I was out for a walk around the lake yesterday when I finally ran into the neighbor. He said he had been sleeping when a large limb crashed through the house three feet away. All told, the tree did $158,000 worth of damage. Fortunately, he had home insurance (our modern replacement for community).

I continue to find it challenging to take time out in my life. In fact, I was writing about this that very morning when I quoted a line by Wallace Stevens, “perhaps the truth depends upon a walk around the lake.”