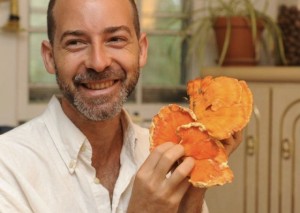 Known as the Mushroom Man to thousands of fungi fans, Alan Muskat demystifies the art of mushroom hunting in Western North Carolina. A graduate of Princeton University, he’s the author of Wild Mushrooms: A Taste of Enchantment and currently serves on the faculty of Asheville’s Appalachian School of Holistic Herbalism. He supplies nearly 400 pounds of mushrooms a year to over 30 local clients including Biltmore, The Grove Park Inn and The Richmond Hill Inn.

How long have you been studying and hunting mushrooms?

What makes WNC an ideal place for a foray?

It’s one of the most biodiverse areas of the country and it’s not overrun with mushroom hunters as in the northwest.

How many kinds of mushrooms can be found in the WNC?

I’d say over 3,000, depending how you count. New ones are being named every day.

Is mushroom foraging a year-round activity? Is there a optimal season? If so, why?

The mushroom season here runs July-October: basically the warmer months. There are a few exceptions, including morels in April, reishi in May, sulfur shelf in June, and oyster mushrooms into Winter. 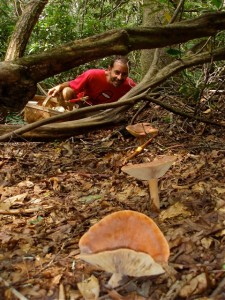 List 5 mushrooms commonly found in the region and describe their flavors.

The most common and popular mushrooms in the area include lobster mushrooms, which look and even taste mildly like lobster; the sulfur shelf, a.k.a., chicken of the woods, which really does taste like chicken breast; chanterelles, which have a firmer texture than button mushrooms and a faint smell of apricots; maitake, a.k.a. hen of the woods, which is even firmer with a meaty/nutty flavor; and honey mushrooms, also nutty but slightly sweet and tangy as well.

What are some interesting examples of how Asheville chefs have incorporated wild mushrooms into a dish?

For the Bizarre Food Show, the folks at The Marketplace marinated the beefsteak mushroom several says. It’s also known as ox tongue and that’s exactly what it looks like. At The Laughing Seed, they use the giant Meripilus, which is quite flavorful but too tough to serve, and boil down an extract from it into a delicious black sauce. But my favorite is Kim Hendrickson’s mushroom ice cream. She calls it “chagalate” after the mushroom that’s used, but it’s actually more of a mocha flavor.

What do you love about mushroom hunting?

It gives my mind that loves to get something for nothing a reason to get out into the woods. It reminds me of nature’s abundance. Every outing has at least one surprise. Sometimes that’s finding nothing– except exercise– so it’s also a zen practice as well.

It’s also nice to know that when you pick mushrooms, the fungus that made them is still there, so it’s like picking apples from a tree. Harvesting, selling or eating mushrooms is a sustainable industry.

What is your favorite local mushroom? Why?

It depends a lot on where it’s growing, how old it is, and how it’s prepared, so it’s hard to say. But the young reishi mushrooms in June are a little-known delicacy that comes to mind.

In general, what are typical spots or conditions where one could find mushrooms in the wild?

Wherever it’s moist. Often that’s higher in the mountains, especially in mature woods. But I find just as many mushrooms in people’s front yards because there’s a lot of organic matter (from recent landscaping) or because the trees in that yard have little competition and the mushrooms are in symbiosis with the trees, so they do well too.

Please explain the dangers associated with amateur mushroom hunting and recommendations for avoiding those.

Most of the danger has to do with pollution, not the mushrooms themselves. Although several hundred mushrooms are known to make at least some people sick, there are only a handful of deadly ones, and these are easy to learn to avoid. All mushrooms soak up environmental toxins, however, so you want to be careful where you pick them. Unfortunately, power plants can spread mercury, cadmium, and other heavy metals quite a distance. Fallout from Chernobyl caused a rise in cancer in Connecticut! Whether it’s fish or fungus, pollution is a global problem.

What is your advice for just getting started?

Find a friend. Learn from a human field guide, not a book. There are clubs across the country and a link to a list of them on my website. Check out the mushroom man rhymin’ “A Fist Full of Fungus.”

What’s the weirdest thing that has ever happened to you while mushroom hunting?

Lots! One time I ran into a former president of the local mushroom club in the woods near Brevard. I’d never met him but I’d seen him in pictures. He asked me if I’d found what’s called a cauliflower mushroom. He said that every time he eats it, he has flying dreams. It turns out that one of the only three places I’d ever found this mushroom was just fifty feet away. And the mushroom will only be there for a week or two each year, if it comes out at all. I brought him to the spot and there it was. I never heard whether it worked and I’ve never heard that about this mushroom again since. The cauliflower mushroom is not a psychedelic mushroom, but reactions like this to certain mushrooms are not uncommon. 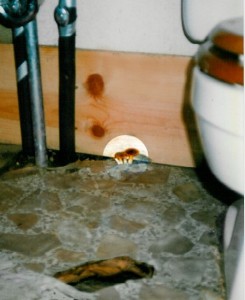 There’s the one that ate out my bathroom floor when I first moved here in 1995. There’s a completely black one (called “old man of the woods”) that I found once completely white; closer examination revealed it to be completely covered in mold (I didn’t eat that one). There’s the log of oyster mushrooms I “borrowed” from my neighbor’s yard and kept watered in my bathtub (also in ’95). There’s the one that was growing out of the head of an insect it had mummified (my friend Todd Elliott, age 16, is an expert in these). There’s mushrooms here that look like birds nests, translucent tongues (complete with taste buds), that glow in the dark… It’s truly a fascinating place to find mushrooms.

I sold mushrooms to over two dozen local restaurants for over ten years and taught classes here and elsewhere in the U.S. for about the same period. Now I’m focusing on updating my mushroom book and setting up others to harvest and sell not only mushrooms but many other wild foods as well.

Is there a mushroom community here in Asheville?

The Asheville Mushroom Club is one of the largest and oldest mushroom clubs in the country. There’s also many “feral foragers” in the area living self-sufficiently to some degree. Both groups love to share homemade wine and mead. I have a proposal for a “mushroom marketplace” encouraging the whole region to start collecting mushrooms, much like everyone here once collected ginseng. Mushrooms are what they call a “non-timber forest product,” which means we could all be making money from the woods by not cutting it down. And like I said, when you pick mushrooms, more grow back. There’s interest from several local groups but no one to spearhead the effort just yet.

Muskat with chicken of the woods by John Fletcher