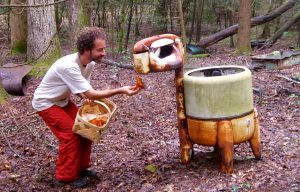 In 2013, Langdon Cook published The Mushroom Hunters. He was interviewed on NPR, and the ensuing discussion was all too familiar.

The first comment posted describes the massive trashing of the woods committed by commercial mushroom hunters. Trashing, or more specifically, ransacking the woods, is the second of the three main objections I hear over and over again to me teaching foraging as a way to make money. Even my girlfriend doesn’t agree with me. Since I’m working on getting foraging taught across the country as a basic skill, I hear this concern all the time. And it’s a valid one. After all, to “pillage” is what the word forage means.

My answer is that of course many commercial mushroom hunters don’t care about the woods: most people don’t! The problem is much bigger than that.

For one, a city park doesn’t get trashed as blatantly as a campsite in the backcountry because the effects are obvious. Similarly, if we ALL personally and directly depended on the woods for our sustenance and livelihood, I doubt anyone could trash it systematically so easily.

There is a long history of successful management of public lands, a.k.a., “the commons,” by the very people that use it. 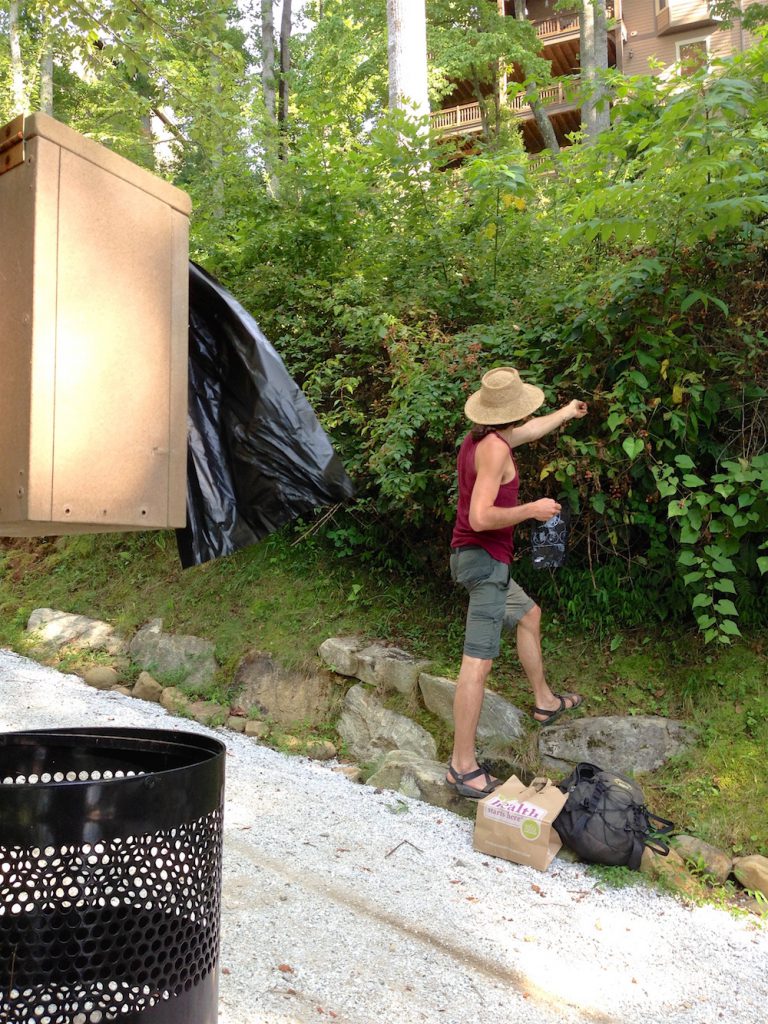 Conservationists know that we’re losing the woods because most people aren’t using them. Like veteran forager Mike Krebill says, “if we truly want to preserve the great outdoors, we need people to care about it… foraging creates people who identify with the outdoors, who want to protect it, who become aware of where they can and can’t collect because of waste dumps or pollution.”

Given our disconnection from nature, even Langdon believes what most modern people assume: that humanity had to figure out what’s edible “the hard way.” You know the expression about what happens when you assume, right? So let’s ask the people who originally figured out what’s edible. That’s hunter-gatherer societies.

Unfortunately, when you kill off most of the indigenous inhabitants of a country, it’s harder to learn from their experience. That’s what happens when your policy is to “shoot first and ask questions later.”

Fortunately, there are a few tribes that have managed to escape civilization. And if you actually ask their shamans, i.e., what we call herbalists, pharmacognosists, or witches today, whether it took trial and error to figure out what is edible and what isn’t, they laugh and say, “what do you do when you want to know something about somebody?”

True hunter-gatherers don’t “forage.” They don’t just take; they share. Consequently, they can communicate with other beings in ways civilized (i.e., city) people can’t even imagine.

George Schaller is considered one of the world’s foremost field biologists. According to Jack Kornfield (though I haven’t managed to substantiate the attribution), Schaller was once asked how he found out so much about gorillas. He said,“it was simple: I didn’t carry a gun.”

I wrote Langdon and he graciously wrote back, agreeing that ultimately, wild food is about reconnection. I told him how I noticed that the word “obsession” came up repeatedly in the show. Mushroom hunting is indeed a kind of “treasure hunting,” with all the greed and fixation that that implies. But the hunger goes way deeper than that.

For many years, long before I got into foraging, I was obsessed with treasure hunting. Gradually, reluctantly, I realized that the real treasure isn’t anything you can put in your pocket or your mouth. I think what’s so enthralling about mushroom hunting is, ultimately, not the mushrooms themselves but the “manna” or “Providence” they represent.

We all want to be taken care of. We want to go back to childhood when, ideally, we felt safe and provided for. If our food can be free from nature and feeding ourselves can really be one big shopping spree, then it’s truly Paradise Regained. Living “from land to mouth,” we find that the Garden of Eden is not some mythical place locked away in the past. We’re not strangers in a strange land after all. We belong here. Our Mother/Father still loves us. After all, we are the children of creation. We just need to come home.

But you can’t go home again. That childhood is over. We can’t go on pillaging; nature is drawing the line. It’s time to grow up. And if we do, we can enjoy The Garden — and pass it on to our children — once again.