The collective unconscious has apparently bubbled up in Scotland. A man has been going around doing ‘good deeds’ in a giraffe suit. 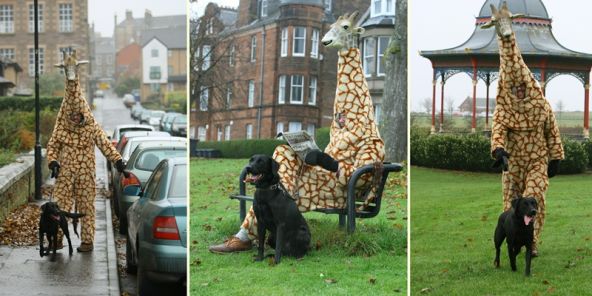 In 2005, I co-founded a center for relationship and communication skills, mostly Nonviolent Communication, or NVC. NVC was founded in the 1960’s by Marshall Rosenberg. NVC teaches that our greatest need is to contribute to life: in other words, to do nice things for each other — and ourselves. Like the man says, it makes him happy to see others get happy just by seeing him.

The symbol for NVC is the giraffe. That’s why I came up with this logo (that might garner an ironic cease-and-desist letter) by changing the “T” to a “J”:

This man apparently has never heard of NVC. He chose the giraffe because “that’s his favorite animal and it sort of has its head in the clouds, but its heart in the right place.” The reason Rosenberg chose the giraffe is that it has the largest heart of any land mammal. But it also sort of has a “birds-eye view” of life, so maybe it can see the big picture. For example, that we’re all in this together.

Also instructive is that the man is unemployed. In other words, he’s not busy working. In NVC, we say “don’t do anything that isn’t play.”  In an ideal world, we don’t do things for money; we do them because it feels good to do them. And that’s not necessarily about helping others. The “good giraffe”‘s favorite deed so far, cleaning up trash at the beach, was enjoyable simply because he liked the smell of the sea.

Smohalla, founder of the Lakota Ghost Dance, said, “my young men will never work, for men who work cannot dream.” Imagine what kind of world we would live in if everyone only did what they wanted to do. Apparently, at least one person would actually choose to be a garbage collector, at least some of the time. But even the person who simply does what they love, something we might think serves no one else, can be an inspiration to others. Think of someone who excels at sports, or the arts. Or someone who has the guts to do something they don’t excel at, something no one else rewards them for.

Those of us privileged enough to worry about how to serve others might be less concerned about it if we really loved ourselves. For then, magically, you see that there are no “others.” An open heart doesn’t choose favorites any more than open eyes choose what to see.

Maybe this man isn’t weird or has nothing better to do. Maybe he has the guts to do what we secretly want to do, would rather do. He wears his Halloween costume every day. And who gets the candy?