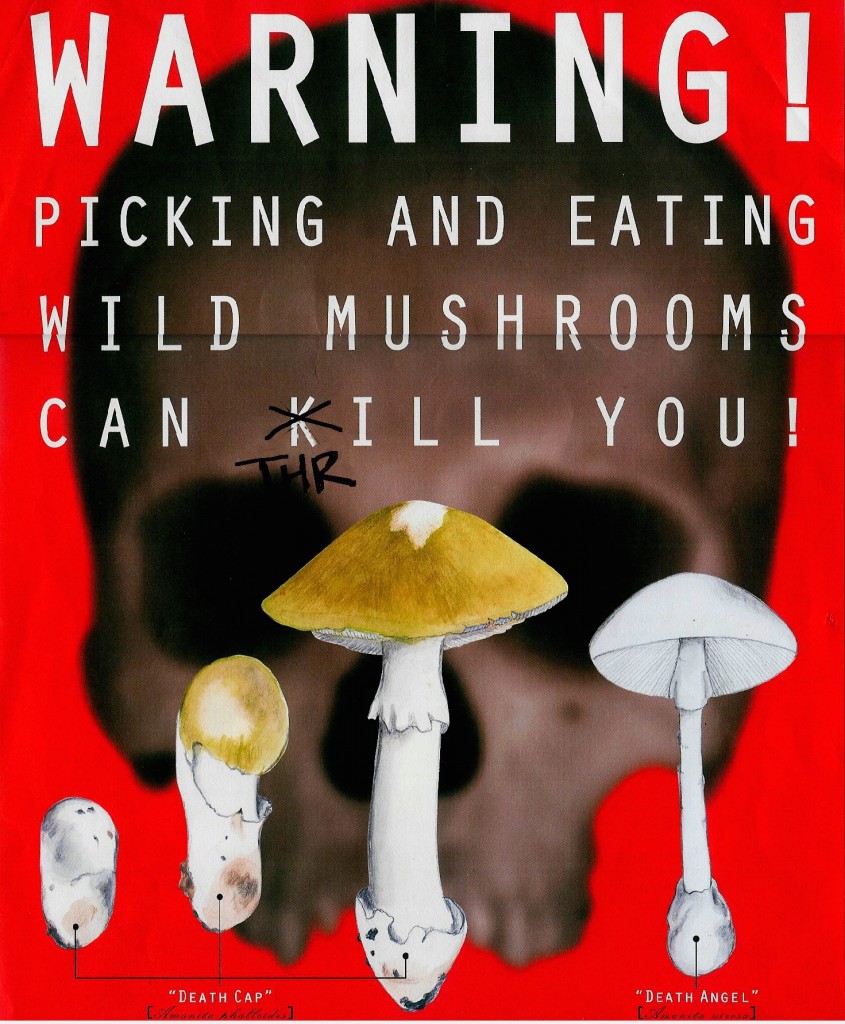 Alien: You are but fungus before us.

Harrison: If we can just open up a dialogue–

Alien: There can be no dialogue with fungus. Only death.

War of the Worlds TV series, Episode 4: Eye for an Eye

Decapitated bodies. Broken parts strewn across the lawn. All victims of violent, senseless abuse. Are you guilty?1

Every year, millions of mushrooms across North America perish at the feet of gun-deprived schoolchildren and sexually-frustrated adults. Where did it all begin? 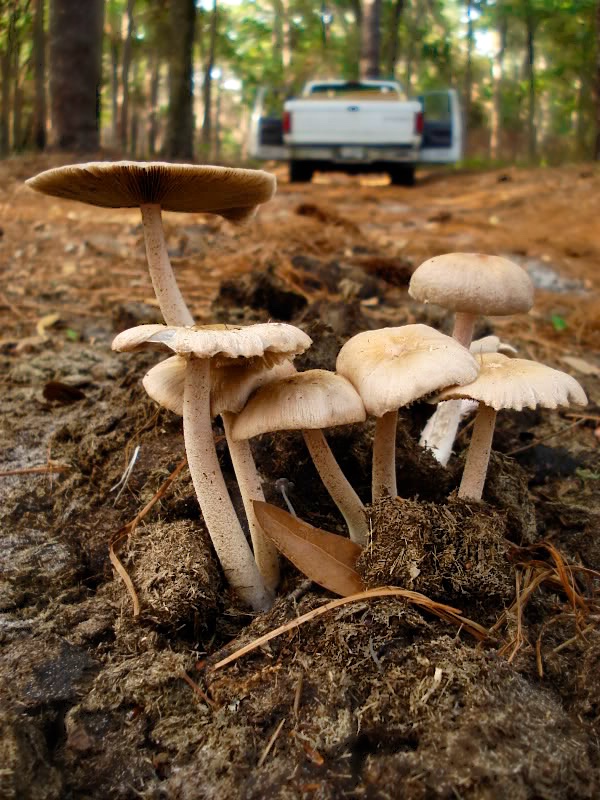 In 1751, Denis Diderot, principle figure of the Enlightenment, proclaimed that “whatever dressing one gives to mushrooms, whatever sauces one puts to them, mushrooms are really only good to be sent back to the dung heap from which they are born”2 The title page to Battara’s Fungorum Agri, published four years later, states simply, “we study fungi; we do not eat them.”

Meanwhile, the 90% of humanity not in the know went on eating mushrooms– along with insects, algae, tomatoes, potatoes, lobster, and other savoir fare that somebody in the world at some point thought was poisonous or disgusting. I guess a little enlightenment is a dangerous thing!

The English, however, took this all very seriously. There wasn’t even a word for mushroom in English besides “toadstool” (and one does not eat a toadstool) until the 15th century, when the English borrowed mousseron from the French.3 Well over a century after Diderot’s pronouncement, the pioneering British mycologist W.D. Hay lamented,

The individual who desires to engage in the study [of wild mushrooms] must face a good deal of scorn. He is laughed at for his strange taste among the better classes, and is actually regarded as a sort of idiot among the lower orders. No fad or hobby is esteemed so contemptible as that of the “fungus-hunter” or “toadstool-eater.”4

Oh, loathsome me! Unfortunately, we inherited our mother country’s dysfungtion. Growing up outside New York City, Stephen Jay Gould remembers “a common schoolyard taunt, often cruelly directed at unloved classmates: ‘There’s a fungus among us!’ A cry that always inspired the ritual retort, ‘kill it before it multiplies.'”5

The U.S. is one of the few countries in the world that has never had a mushroom postage stamp.6 Maybe they’re afraid people will lick the wrong side? Clearly the Mayflower brought more pilgrims than progress. Again, Dr. Hay:

This popular sentiment, which we may coin the word “fungophobia” to express, is very curious. If it were human- that is, universal- one would be inclined to set it down as instinct and to reverence it accordingly. But it is not human- it is merely British.7

Or British et al. Fungus-hunting may not be our national pastime either, but if you stoop so low as to pick mushrooms, rest assured you’re not alone. Take, for example, all of Southern France and Spain: 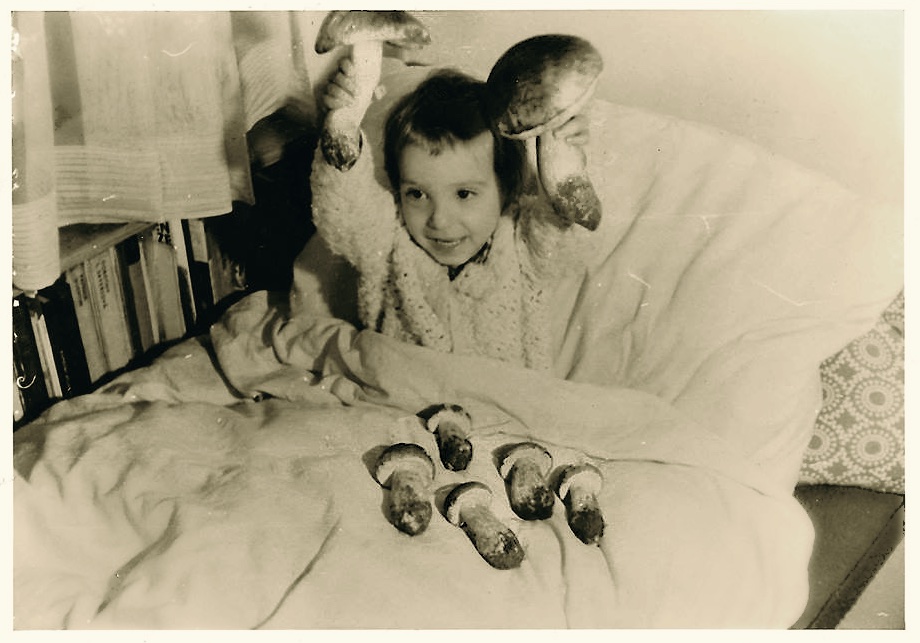 These are the areas where mushrooms are considered friends, where children gather them for fun before they can read and write, where no adult feels the need for a mushroom manual, where immense quantities of mushrooms are prepared for the table in innumerable ways, and where accidents are unknown. The gentle art of mushroom-knowing is a universal accomplishment. Mushrooms are a conversation piece among men and women. Novelists introduce them into their narratives, poets into their verses; and they recur in proverbs and ditties. Moreover- and here is the telling thing- all the references are friendly, favorable, and wholesome. 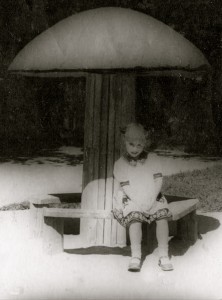 It takes a village idiot to get poisoned in France; every pharmacist is trained in mushroom identification! G.W. notwithstanding, about thirty frogs do manage to croak from putting their mushroom where their mouth is. But that’s out of thirty million avid consumers.8 Your chances of going crispy critters from freedom fries in the USA are ten times as good.9 C’est la vi!

The cultures that have been hunting mushrooms for millennia are still around, and so am I.10 If wild mushrooms are so dangerous, then why, after thousands of years, does most of the world continue to eat them?

Here’s a chance to test your myco-literacy. True or false:

Many do fear the goodly mushrooms as poisonous damp weeds. But this doth in no way abate the exceeding excellence of God’s Providence, that out of grass and dew where nothing was, and only the little worm turned in his sport, come, as the shaking of bells, these delicate meats. 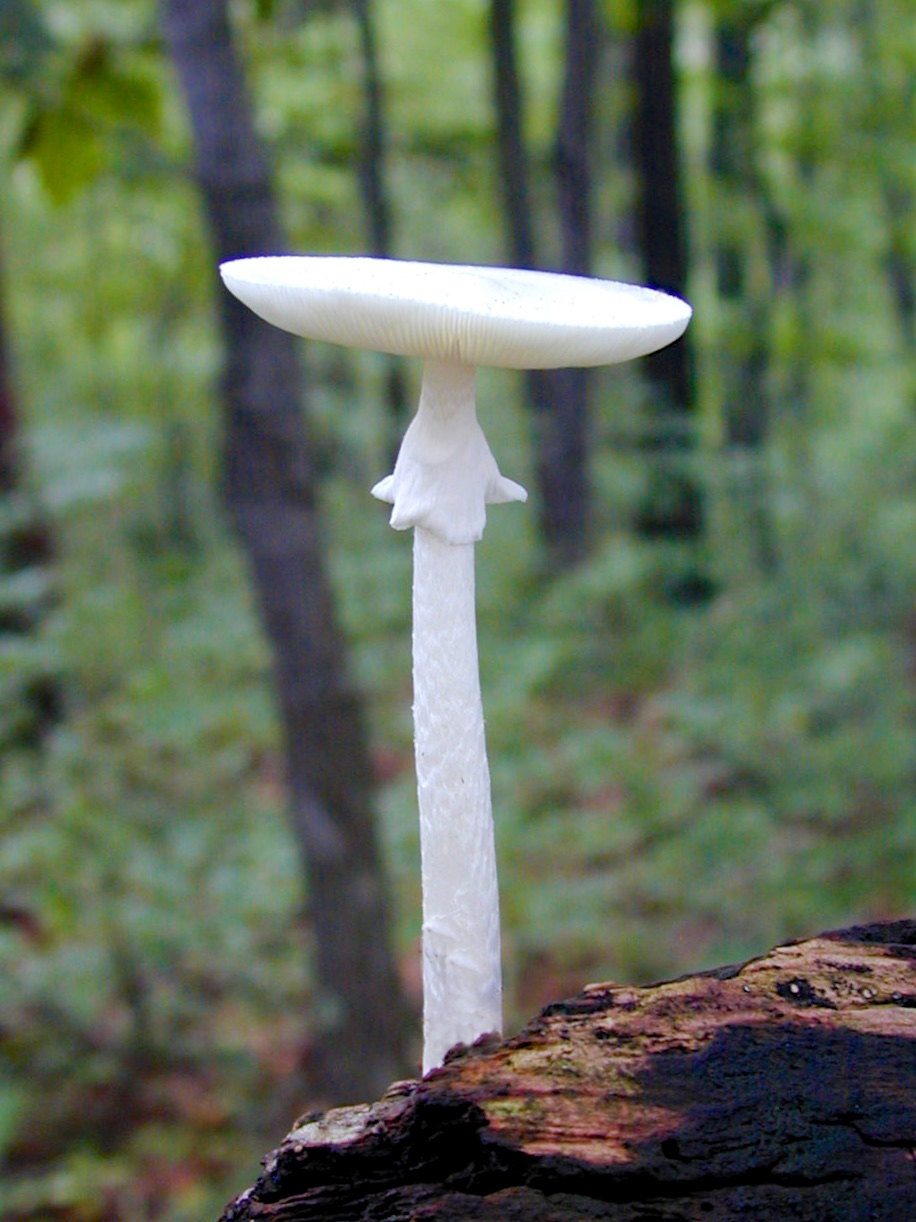 Fungilliterati notwithstanding, of 30,000 mushroom species on the planet, less than 300 are known to be poisonous. Of these, only ten or so are known to be deadly. 12 Hundreds more are known to be edible, medicinal, or both: the chanterelle, morel, porcini, chicken-of-the-woods, reishi and maitake, to name a few. Each of these famed delicacies is as nutritious as it is delicious, and all can be either cultivated or found growing wild across most of North America.

Aside from a handful of mushrooms that can cause minor skin irritation, it’s perfectly safe to sniff and handle any mushroom. You’ll find that mushrooms can smell like seafood, cucumbers, marzipan, maple syrup, garlic, radishes… you name it. The matsutake, prized for its flavor and medicinal value, smells like a cross between red hots and dirty socks! 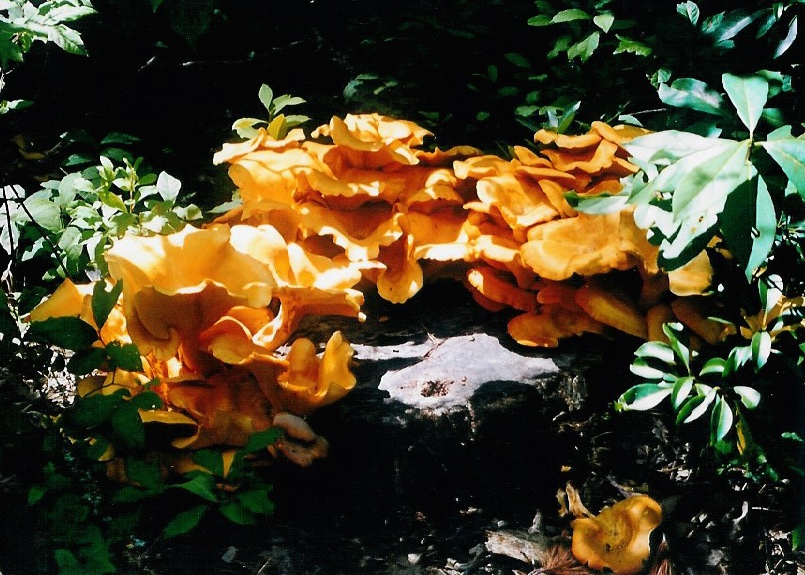 The truth is that mushrooms are far less  dangerous– and far more important– than many believe. Most people are aware– at least on some level– that fungi are nature’s premier recycling system. What many don’t know is that most mushrooms are symbiotic. In fact, nearly every plant on earth depends on fungi to survive. Most of these fungi, simple subterranean molds, do their job invisibly, never seeing the light of day or reminding us with a mushroom. Others, as we witness every rainy season, festoon the forest with color.

There are few things as enchanting on an Autumn morning (and in warmer climes, throughout the winter) as a walk in the woods. This is when the rush of green subsides, the rain soaks the ground, and mysterious mushrooms emerge. Bright red umbrellas from under fallen leaves… snow-white icicles and purple sea corals… giant puffballs and tiny fairy fans. From the jack-o-lantern (which glows in the dark) to the velvet earth tongue, nature’s kaleidoscopic kingdom is a source of endless fascination. Children around the world, even those who won’t eat mushrooms, still love finding them.

What a delight it was to ramble through the clean, fragrant woods, filling our baskets… When I was almost eight and my sister was nearly seven, we were already proficient mushroom gatherers… When we were naughty, our mother would punish us by forbidding us to go mushrooming. 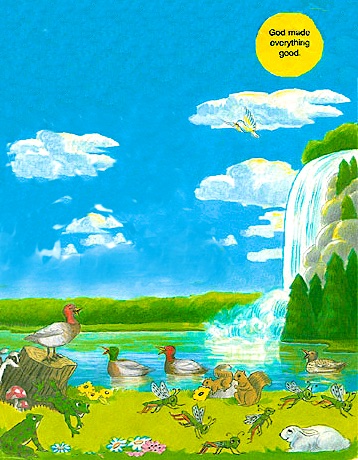 Mushrooms “blossom” in the fall just like flowers in the spring. Few are poisonous; there are many more poisonous plants. So why the fungophobia?

All things foul and dangerous…all creatures short and squat…All things sick and cancerous…the Lord God made the lot.

In our culture, flowers are to mushrooms as butterflies are to moths. Moths can be just as colorful and at least as beautiful, yet they have that moonlight spookiness… Same with mushrooms.

My friend’s dad says, “I don’t eat mushrooms. They grow in the DARK!” Sho-nuff: the freaks come out at night! Mushrooms don’t need sunlight because they are decomposers. They’re the butt of the world– and many of its jokes and insults. Sounds like a Yoko Ono song but it’s true. “They stand on the threshold between the living and the dead, breaking the dead down into food for the living, a process on which no one likes to dwell” (metaphysical poets, goth teens, and scorpios excepted).13

Or maybe it’s that, like our own bodies (both dead and alive), mushrooms can be soft and slimy. Sex and death: what better buttons to push! Most of the humor in this book is based on these two facts of life. 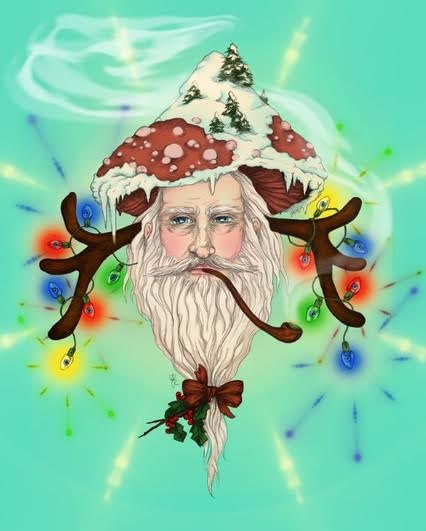 That’s what mushrooms do: they compel us to face the facts. A few do this quite dramatically. There seems to be an ancient Anglo-Saxon taboo around mushrooms that obscures this valuable service. This may well go back millennia to when mushrooms were considered a divine sacrament, something not to be taken lightly. According to some ethnomycologists, what’s really scary about mushrooms is not that a handful are deadly but that others are potentially entheogenic. Entheogenic means “that which helps one see God inside them.”

So here it is, everything to know about mushrooms you ever wanted– but were afraid to eat. Seek and you shall find these heavenly meats: at the local farmer’s market, dried over the internet, or best of all, growing in your own woods or backyard, where shopping is a pleasure. Come to where the flavor is. At nature’s supermarket, the produce is always local, organic, fresh, and free. This is one place where you get what you don’t pay for. Learn to gather your own; you’ll be glad so few people do!

6 there have been over two thousand mushroom stamps made around the world; none by the U.S. (Taylor Lockwood, personal communication, 5/20/06). For some lovely proposed designs, see fungiphoto.com.

7 This bias against foraging arose with civilization. As hunter-gatherers were displaced by farming communities, “a prejudice was born that wild food was beneath the dignity of real human beings, and that those who lived upon it were subhuman. It was alright to kill or mistreat them, and conquering their land was virtuous. This attitude continued until foragers were exterminated or their way of life had been destroyed” (Thayer, The Forager’s Harvest, 9). Similarly, “the traditional dismal view of the hunters’ fix goes back to the time Adam Smith was writing, and probably to a time before anyone was writing. Probably it was one of the first distinctly neolithic prejudices, an ideological appreciation of the hunter’s capacity to exploit the earth’s resources most congenial to the historic task of depriving him of the same” (Sahlins, “The Original Affluent Society“).

Of course foraging is viewed more favorably in some countries than others; perhaps it correlates to their degree of imperialism. Even so, agriculture is by necessity imperialistic; see The Vegetarian Myth or Richard Manning, Against the Grain: How Agriculture Hijacked Civilization.

10 at a naturalist conference few years ago, a bug guy put me on the spot, asking, “so what makes someone a mushroom expert?” I said “survival!” I got him in trouble later, though, when I kept tossing cicadas into the potato chip bowl.