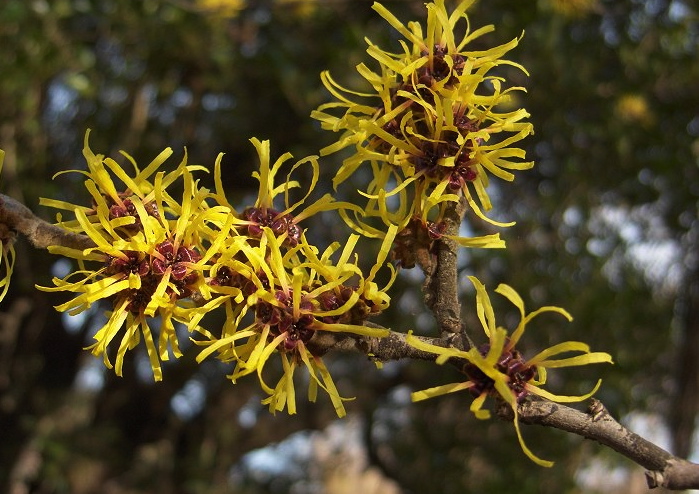 Last week I went for a long hike and the weather was flip flopping around from gorgeous spring sun to an afternoon of pouring sleet which is one of the reasons March is considered such a fickle month. I paused and took a rest to get some water by a shrubby tree and I was intrigued by all these thread like, shriveled, wispy brown, brittle dead flowers that disintegrated easily and popped when I squeezed them. I realized it was a Witch Hazel tree. In general Witch Hazel is more of a shrub than a tree but it is one of the more unusual plants in the Botanical world as it flowers at a time everything else seems to be moving into dormancy for winter.

I remembered seeing this same tree last December as it was a very cold day and the tree was literally covered with hundreds of spidery yellow flowers clustered together. It was a stunning sight as the sky was so blue and here I was trudging through an ocean of dead leaves, enjoying the starkness and naked beauty of winter when I see this tree in full bloom. Witch Hazel always catches me by surprise as it feels like a cyclical amnesia; when I see a tree like this in bloom, it just doesn’t seem right and feels so out of place but that’s the coolest thing about Witch Hazel in that it blooms when everything else has gone to sleep.

Growing up we always had a bottle of “Witch Hazel” in the medicine cabinet and all I knew about it was that it was used as an after shave astringent to slap on your face as it felt good after using a straight razor. Yes, it burned a little but left your face feeling refreshed and alive.

Common Witch hazel (Hamamelis virginiana) combines two Greek words meaning fruit or apple and together which is a reference to the shrubs habit of producing flowers at the same time the previous year’s fruits mature and dispense seed. Most people are familiar with the astringent properties of the extract, which is like rubbing alcohol, but the fruits are interesting as Indians in the South prized these nutty little seeds and even though I haven’t tasted them yet, they are supposed to taste like pistachio nuts. Their seed dispersal mechanisms are also fun and reminiscent of jewelweed in that they explode when ripe, sending their seeds into the woods like little rockets.

Witch hazel is a plant that was widely used by American Indians as an important medicinal plant as the bark was used to treat skin ulcers, sores and tumors. Some tribes placed witch hazel twigs on hot rocks within a sweat lodge ceremony to soothe aching muscles and other tribes boiled the twigs and applied the infused water as a salve for aching backs. A strong tea was brewed to treat colds and cough and was also considered a blood purifier. The same tea is also a great antidote to irritations from insect bites and while living in Virginia, it was something I kept on hand to deal with one of the banes of my summer existence-chigger bites and poison ivy rash! In addition, witch hazel extract has been used historically for eye inflammations, hemorrhoids and bee stings. Herbalists prize the use of witch hazel tea for checking bleeding, both internally and externally and it has been used successfully in the treatment of hemorrhoids as a poultice of fresh leaves and bark helps relieve inflammation, bleeding, pain and swelling.

Witch Hazel is one of the few American medicinal plants that is still approved by the Food and Drug administration as an over the counter astringent. It is still widely used throughout Europe today as Europeans are far more progressive in regards to herbal medicine and they have managed to retain a larger part of their heritage and ancestral roots when it comes to the use of herbs as medicine.

Curiously, Witch Hazel is not a member of the Hazel family but the leaves do have an amazingly close resemblance to hazelnut tree leaves. The name of this unique shrubby tree has an interesting history in America as the name witch arises from its use in colonial times as dowsing rod. Witch Hazel’s supple, flexible, forked branches were a favorite choice for dowsers searching out sources of water and precious metals. The name arises not from “witch’ but from the old English word “wych” which means pliable forked branches. In England, dowsers used elm trees but when the settlers landed here, they found the Witch Hazel trees crooked branches a good replacement to use in the art of dowsing.

My father was the epitome of the logical, ultra rational scientist but over the years he told a story with great pleasure of his scientific skepticism being blown apart when he used a dowsing rod once that was made from witch hazel branches and felt what he described as an “uncanny, incredibly strong, magnetic pull to the ground” and to his shock located a supply of water upon digging in that spot. The proof is indeed in the pudding!

Witch hazel not only a highly beneficial medicinal plant but is a unique and lovely shrubby tree that is worth learning and now there are many unusual cultivars with flaming red or larger showy orange flowers, some of which will bloom in November and December and others in January.