From Crime to Community 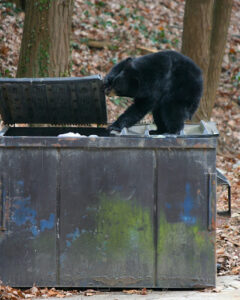 How do we address rising rates of crime? The same way we solve nearly every other problem we face: by going back to the beginning, to where it all began. When the source of crime is obvious, how to eradicate it becomes clear.

It Happened to Me

In 27 years of living in Asheville, I’ve never locked my doors — until now.

Last Tuesday night, I woke to the sound of someone at the back door. Then I heard it open, and someone came in.

I kept still. My phone was across the house. I figured that whoever it was would grab a couple things and leave. Instead, over the next 20 minutes, this person came in and out four or five times. I couldn’t understand how someone could be so foolish to stick around for so long or to come into a house with a car parked outside in the first place.

Granted, I did have all the lights out, and they didn’t seem to be using a flashlight. But they also seemed to have no concern for being quiet. I figured it must be someone high on drugs. In fact, at one point I thought I heard them drinking. I figured they’d found the booze. Meanwhile, I kept still, the door to my bedroom open. They were just a short hallway away.

I began to hear what I thought might be whispering. At this point, I thought it was only a matter of time until they came into the bedroom. So the third time they went outside, I crawled under the bed.

I was cold, but slightly more safe. I figured that if they were to find me, I wouldn’t look at them. I would just say, “I’ve already called the cops, so you better get going.” If that didn’t work, my ideas stopped there.

The last time they went outside, when things finally got quiet long enough, I ran to my phone, ran out the front door, and called the police. I rang the neighbor’s doorbell, but they didn’t answer. I sat outside in sweatpants and a t-shirt for 14 minutes. It was about 40 degrees.

One cop arrived, then another. I asked if I could sit in the car. They said no. They asked if they could “clear the house.” I said yes. A few minutes later, they called me in.

They said I’d been visited not by a human but a bear: a pretty large one. They saw it leaving. A third cop arrived, admiring the entry. My back door has a screen door with a lever handle, then a regular round doorknob. There was zero damage. 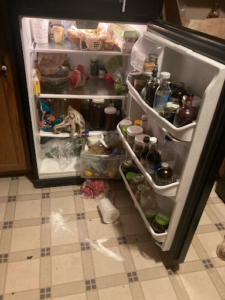 Fortunately, the door leads straight into the kitchen, where the bear had opened the fridge, rummaged through it a little, left the door open, and as far as I could tell, had only taken a sealed, one-pound package of ground beef. An open jar of nuts (barely visible on the right), was left standing on the floor. Aside from a little spilled flour, that was it.

Since I’m a forager, there was an open basket of unshelled black walnuts, one of hickory nuts, and several open jars of acorns in the kitchen, all of which the bear ignored. Plenty of that in the woods, I guess.

Three nights later, just fifteen minutes after the time the bear had first come in, I heard it again. It was trying the back door. Fortunately, I had locked it since. I shouted at the bear, then watched it go down the back stairs. It was at least 300 pounds. It looked like an older male, with a head the size of a basketball.

My naturalist friend tells me that, given their incredible sense of smell, this bear definitely knew, when it came in the house, exactly where I was. And it turns out that my experience is not unusual.

I grew up in civilization: literally, in the city. About 25 years ago, I moved to Asheville, a relatively small city, but a city nonetheless. And as Asheville has grown and gentrified, theft has skyrocketed: mostly the contents of mailboxes, porches, cars, or garages, but even people’s homes are being invaded. For now, most of these intruders are bears.

Back when I first started foraging, my mother asked me, “when you go scavenging in the woods, are there bears… and homeless people?” There are indeed more and more bears in the city and more homeless people in the woods. Both are increasingly disenfranchised. Both are being driven to steal.

Gun violence is also on the rise, and from what I’m told, there’s more gang activity in Asheville than most people realize. Overall, Asheville is one the nation’s top 10% most violent cities and has “one of the highest overall crime rates of any U.S. city.” Many locals already believe that Asheville’s growth has caused the violence. But Asheville is just another city, and every city is part of civilization, which is where these problems started.

The good news is that there is more and more money pouring into my county, through federal pandemic recovery funds, a regional health trust established when our hospital system was sold to a for-profit chain, rising property taxes, and tourism.

Much of this revenue is already earmarked for addressing inequities. Even tourism dollars are starting to be aimed in that direction. Where do we need this funding the most? What interventions would be most effective? Is there a way to stop crime where it starts?

We Take a Pillage

In agriculture, we don’t eat what nature provides; we eat what we make it produce. We treat everyone this way. Instead of accepting what comes naturally, we make people do what we think is right.

Of course, we don’t agree on what’s right; hence all the fighting. But it hasn’t always been this way.

In hunter-gatherer society, no one is above or beneath anyone else. Everyone shares everything, and no one is forced to do anything, not even children. It’s community without communism.

Hunter-gatherer society works because everyone cares about everyone else, human and otherwise. That’s not impossible; it’s natural. We evolved to be communal.

Today, we don’t trust each other, and for good reason. Everyone is out for themselves. Consequently, most of us see gathering as pillaging. We see hunting not as sharing but as violence. We think this is a dog-eat-dog world. Hunter-gatherers don’t see it that way.

Where civilized people see a jungle, hunter-gatherers see community. There is a way back to that community, to an Eden we lost not so long ago.

A violent system leads to more violence. We pillage because we are being pillaged. In civilization, that’s the way life works. And don’t be fooled: in this system, there are no winners. In a domination-based society, everybody loses.

Inequality is not just unethical, it’s unsustainable. It’s why dozens of civilizations have come and gone. It’s how civilization started, and it’s how it’s ending. We have lived by the sword; will we die by it too?

Unity or oneness means that you and I, whether we recognize it or not, are no more separate than arms on the same body. If we work for the good of everyone, we thrive. If we don’t, we don’t survive. It’s that simple.

Disunity manifests in the body as cancer and in society as racism, partisanship, loneliness, the opioid crisis, deaths of despair in general, war and more. Germs alone do not cause a pandemic; social disintegration is what allows it to spread.

Wrapped up in our squabbles, we have killed half the animals on earth. We are fighting over chairs on the Titanic. Why can’t we turn this boat around?

The reason we don’t recognize our interdependence is that unity is not a belief; it’s a feeling: the feeling of love. We all naturally love. We evolved to care about everyone, to be prosocial.

We can’t love, however, when we’re afraid. How can we have open hearts when our experience has given us plenty of reasons not to trust others, to “look out for number one” instead?

Tools of the Trade

Fortunately, there are a number of proven strategies for rebuilding community. These include:

• Nonviolent Communication, a way of relating to yourself and others that starts with the understanding that we all truly want to do what’s best for everyone.• Interpersonal Neurobiology, a therapeutic modality that recognizes how un-separate we are.

• Psychedelic-assisted Psychotherapy, a jump-start toward realizing our inherent unity.

• NeuroAffective Relational Model (NARM), a way to heal fear where it really resides: in the body.

• Foraging, a direct experience of paradise. Living “land to mouth” has given me the experience of feeling supported by a benevolent world.

These approaches foster both mental and social health.

You might think these ideas are just the latest blather Asheville is famous for. After all, the word bunk comes from Buncombe County, of which Asheville is the seat. And it’s true that therapy won’t make inequality disappear, at least not overnight. How can we heal trauma when the violence that causes it is ongoing? If inequality is at the very foundation of civilization, isn’t this a bigger problem than can be solved locally?

Certainly. But people who strive to love by healing their trauma and communities that strive for the welfare of all living beings can be examples to the world. Several of the tools I recommend are already in use, with great success, by innovative organizations like SeekHealing.

We can shift from a culture of domination to one of partnership, and we don’t have to go back to the stone age to do it. Let us put our money not just where our mouth is but where our mind should be. Of course, changing local priorities, not to mention those of our entire society, is a major undertaking. But today, it’s what’s needed. Community is the only way.

Fortunately, unity is our natural state; we just have to uncover it. Going back to Eden, back to love, is coming home. And that’s where the healing begins.