Aren’t we so lucky that we live in modern times and have lots of leisure and an array of technological conveniences to make our lives easy? Today I think there are relatively few thoughtful, honest and well-informed people who still believe in this myth. To lose one’s faith in “progress,” one has only to look around and see the devastation of our environment, the spread of nuclear weapons, the excessive frequency of depression, anxiety disorders and psychological stress, the spiritual emptiness of a society that nourishes itself principally with television and computer games… one could go on and on.

That’s one TED talk we won’t be seeing. Still, the question remains: is civilization just a problem not worth having? Is it more trouble than it’s worth? And if we have to transition, do we have to go out with a bang?

I think the answer has been there all along. “Where you stumble,” says Joseph Campbell, “there your treasure lies.” From Golden Age to golden cage, it is we who carry the key. But like the man who loses his keys in the dark, we’ve been looking in the bright place. Nietzsche says, “of all mines of treasure, one’s own is the last to be dug up.” Let’s go back and find it.

Let there be a country with few people.
Though they have machines that do the work of ten or a hundred,
they never use them…
They have boats and carriages, but no one needs them.
They have armor and weapons, but no parades.
Instead of writing, they go back to using knotted cords.
They are happy with their food, pleased with their clothes,
satisfied with their homes.
Though the next village is so close you can hear cocks crowing and dogs barking,
the people here grow old and die
without ever feeling any desire to visit.

The Luddites were not the first to reject civilization’s “advances.” About 2,500 years ago, the early taoists were among the first primitivists. Their picture of contentment is hard to imagine. But if it ever existed and we can ever regain it, it won’t be a matter of beating our plowshares into digging sticks. There’s no point in discarding our tools when we are the tool bag, so full of ourselves that we can’t see past our noses — or in many cases, our frigging sticks.

The problem, in other words, is not technology but whether we have the commensurate wisdom to handle it. A knife, like a drug, is both powerful and dangerous. It all depends on how it’s used. Modern medicine, for example, may have reduced infant mortality, but it’s also now the third leading cause of death in the country. Similarly, I’m not about to give up my computer, but I’m spending far too much time on my butt.

This paleo dietribe notwithstanding, the key thing to recognize is that the original tool is inside us. Yes, we’ve been playing with fire. Rome is burning. For many, life is hell. But like Aldous Huxley says, “nothing burns in hell but the self.”

The word man means thinker. We have the power to conceptualize. That allows for language, mathematics, art, and more. But this ability to refine, to simplify, is also the original drug. Before agriculture, there was menticulture. Thinking is our first and foremost addiction.

Thinking isn’t something to get rid of. It’s our Sovereign’s Orb, our royal ball and chain. We can’t throw it out. It’s not just water on the brain; it’s the baby.

Our forefathers had civilization inside themselves, the wild outside. We live in the civilization they created, but within us the wilderness still lingers. What they dreamed, we live, and what they lived, we dream.

T.K. Whipple, Study Out the Land

Civilization is no accident. We were set up for this. Pandora’s box was meant to be opened. Like Rubik’s cube, we are meant to figure this out. Like any puzzle, you can’t just leave out some of the pieces. Our brain is not the Buddhist’s boat. Yes, we must reclaim our animal and indigenous selves. But we must include and transcend them. We can’t choose between instinct and socialization. Neither one makes us free.

“Our truest life,” says Thoreau, “is when we are in dreams awake.” If civilization is a nightmare, the goal is not to wake up out of it. The goal is to wake up right here.

To face the future, we can’t bury our head in the sand. Blessing or curse, there’s no going back. The only way out is through.

We used to microwave
Now we just eat nuts and berries

The Talking Heads, “(Nothing But) Flowers”

Civilization is a colossal challenge, but the thing to realize is that the world is supposed to grow more intricate, not simpler. Complexity is a good thing. After all, nature is far more complex than anything humans have created. Mother knows best, and Mother made us. So what do we do?

The wisdom needed to wield our powerful-yet-addictive tools effectively is not just, as the Serenity Prayer tells us, about knowing the difference between what you can and cannot change. It’s about knowing what to change in the first place. The fundamental issue is whether we long for greener pastures.

Are we happy with our lives, or do we begrudge the drudge? Are we “imprisoned by the way it could have been?” Do we feel at home here, or are we building a time portal to get someplace else?

Foraging, as I teach it, is not about how to get more. It’s about appreciating what we have already. There’s no point in going off-piste if you’re going off pissed. Are we looking for love in all the wrong places?

The most precious things of life are near at hand, without money and without price. Each of you has the whole wealth of the universe at your very door. All that I ever had, and still have, may be yours by stretching forth your hand and taking it.

The word for what I’m talking about is rewilding. Rewilding has been defined as “the reversal of human domestication.” But rewilding is not rewinding. We don’t wind back up where we started, for the way back is forward.

Rock-climber Bonnie Prudden says, “you can’t turn back the clock, but you can wind it up again.” The clock here is culture in general, not just agriculture. We need to pick up the pieces we’ve discarded, what we tilled out of our fields. And the stone that the farmer refused must be the head cornerstone. That cornerstone, like the plaque in that little garden, is about being present. 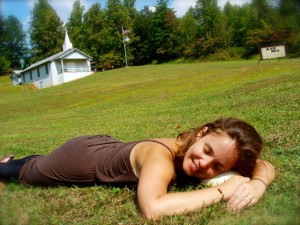 Being present means seeing the present as just that: as a gift from God. Whatever presents itself is a gift. To accept this gift, “to freely receive that which is freely given,” is, as my friend Michelle Bush puts it (seen here using a puffball to do what she does best), “to close the circle of creation.” It’s what Eckhart Tolle calls our inner purpose, the main reason that we’re here.

Being present means embracing life as it is right now, not being hung up on to the past or waiting on the future. In other words, your life has never been a mistake. Civilization has not been a mistake. Things have never been “bad” and they’re not bad now. Like the song says, “these are the good old days.”

I used to envy the father of our race, dwelling as he did in contact with the new-made fields and plants of Eden; but I do so no more, because I have discovered that I also live in “creation’s dawn.” The morning stars still sing together, and the world, not yet half made, becomes more beautiful every day.

It’s not wrong that we’ve “strayed so far from Nature.” In Owning Your Own Shadow, Robert Johnson reminds us that we can’t reach The New Jerusalem without leaving The Garden first. You can’t climb a higher mountain without coming down off of a lower one. In between, you have to enter the wilderness, the ‘dark night of the soul.’ What gets you through it is knowing that the world is equally perfect, every step of the way.

Embracing the present doesn’t mean that things can’t get better. It means believing that things are always the best they can be. There’s a difference between better and less bad. The difference is crucial. It’s why Nonviolent Communication, a system designed to bring about world peace, is about “making life more wonderful.”

“There are no mistakes,” says Robert Allen, “only feedback.” The feedback here is that we’ve lost a sense of wholeness. To be whole is to be healthy; it’s what the word means.

Lord Byron says “man’s greatest tragedy is that he can conceive of a perfection which he cannot attain.” He’s shopping in the wrong store. Like Pascal says, there’s a God-shaped hole in each of us. It’s one that no amount of consumer goods, entertainment, accomplishments or faith can fill. Ain’t a mountain high enough. Our chachkes are not unlocking heaven’s door.

That hole, as I see it, is The Whole. The Whole is what God is. And God is right in front of you, in every moment. We are here to know God. It’s what we’re born to do. It’s in our nature. In wilder-ness is the salvation of the world.

Love the One You’re With

The healing power of the woods is that it helps us to be whole again. It’s why wild food, not just “whole food,” is so wholesome. It’s why, when you spend time in nature, even if you don’t find anything to eat, you’re still fed. By connecting to nature, we recover our own true nature. We are all in recovery, recovering our true selves.

According to many scholars, the original meaning of the word religion is “reconnection.” In my view, there can really only be one religion because there is only one Whole, namely, God, a.k.a., the universe. That word originally means “all together” or “turned into one.” And that’s why being healthy and knowing God are the same thing.

The essence of all religion has been called The Perennial Philosophy. The Perennial Philosophy, as I see it, is not just a fleeting foray into agriculture. It doesn’t come and go. It lasts. Being in touch with God is not just a ground score, a peak experience, a fleeting orgasm, or a trip someplace else. Rather, if you seek ye first that kingdom on earth,

a “mystical union” with the entire world may be established. The feeling of ecstasy or bliss associated with this union, while perhaps more gentle and less dramatic than that associated with falling in love, is nonetheless much more stable and lasting and ultimately satisfying… The heights are not suddenly glimpsed and lost again; they are attained forever.

When you’re in love with life itself, there’s nowhere else you’d rather be. The world is your playground, your Garden once again.