From We to Me 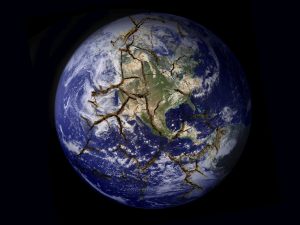 No man is an island…
any man’s death diminishes me…

And therefore never send to know
for whom the bell tolls.

It tolls for thee.

Humanity has a 40,000-year-old problem. Ever since the first tools, human progress has carried the seeds of its own destruction. “Every civilization that has ever existed has ultimately collapsed.” Ours is collapsing now.  Can we learn from our predecessors before it’s too late?

A 2014 study (partly funded by NASA) concluded that societies fail due to “over-exploitation of either Labor or Nature.”  In other words, we cannibalize our “human resources,” and we suck the earth dry. We literally undermine the very foundation of our survival. Why?

In A Short History of Progress, Ronald Wright chronicles the pattern. Addicted to technology, instead of seeing the writing on the wall, we double-down in denial. In our quest for comfort, convenience, pleasure or excitement, we overdose on progress.

What causes this addiction? Why does this happen, again and again? Why are so many of struggling to survive while others can never get enough? Because there are no “others.”

Whether greed or need, every crisis, whether opioid or financial, is an identity crisis. It cuts to the heart of what it means to be human. Man means “thinker,” and thinking is our first and last addiction.

Thought is the original tool. It can make life easier. With it, we can manipulate the world. Thought is what got us here, and if it all ends here, it will be what killed us.

There’s nothing wrong with thought, but there’s something very dangerous about it. And our very first thought is the most dangerous. It’s the thought we call “I.”

Addiction is a disease of the whole. It isn’t something that happens to some people. The same is true of cancer. Saying “he has cancer but I don’t” is like saying “my liver has cancer but my stomach’s doing fine.” Your stomach or your liver doesn’t get cancer; your body does. If any of us have cancer, we all do.

Humanity is dying from a single fatal disease. We think we are separate, independent individuals, yet the truth is the opposite. Humanity is like an ant colony or a bee hive. We are a superorganism. We have never been separate and we never will be.

Imagine you are stranded on an island with a number of other people. This is not a reality show and no one is going to rescue you. No one on that island is going to survive, much less thrive, on their own. This is the situation we are in now. Each of us is like an ant separated from the colony or a bee that has lost the hive. Each of us, on our own, is done for.

The very reason humans have overtaken the planet is that we are, by far, the most social animal. For 99% of our existence, we learned from each other. We raised our children cooperatively. Today, every one of us depends on a global support system and benefits from three hundred thousand years of human development. Cooperation is the very thing that makes us human.

We human beings are social beings. We come into the world as the result of others’ actions. We survive here in dependence on others. Whether we like it or not, there is hardly a moment of our lives when we do not benefit from others’ activities. For this reason, it is hardly surprising that most of our happiness arises in the context of our relationships with others.

So much of our thinking is devoted to how to get along that it is mostly unconscious. Today, that has got to change. The only way we’re going to survive is to overhaul our thinking. We need a global culture of unity. We need to realize, consciously, that we are not just all in this together. We are all, together, this.

In The Gods Must Be Crazy, a hunter-gatherer clan has a taste of civilization when they fight over a single Coke bottle. Imagine fighting over a single bowl. The challenge is not how to split it up fairly: a piece of a bowl is useless. The bowl must be whole. The Earth is the same.

Ever since agriculture began, we have fought over land. Land, sea, and air are all part of one living system. To split it up kills it. And that process is almost complete. It’s why the fastest mass extinction the Earth has ever known is well underway.

King Solomon was once brought a baby being fought over by two women. He offered to split it between them. The one who protested was the true mother.

Sapiens means “wise.” To be sapiens is to realize that we cannot split the earth between us. To eat our cake, we must have it too. After all, we are not just on the earth, we are Earth. We are part of that living system. And as we’re seeing now, divided we fall.

Addiction is based on denial. We are a superorganism denying itself. This primal error has been snowballing ever since. Over thirty civilizations have come and gone. And there is only one left.

If you… see yourself as outside and against the things around you…if this attitude is your estimate of your relationship to nature, and you have advanced technology, your likelihood of survival will be that of a snowball in hell. You will die either of the toxic byproducts of your own hate, or simply of over-population and over-grazing…

If I’m right, the whole of our thinking of what we are, what other people are, has got to be restructured. The most important task today is to learn to think in a new way.

Gregory Bateson, Steps to an Ecology of Mind

The root of our affliction is our self-conception. We must go from we to me. That’s not something we should do; it’s something we must do. It’s not morality; it’s reality. The cure for our deadly addiction is seeing the world as it truly is.

G.K. Chesterton was once asked what’s wrong with the world today. He said, “I am.”