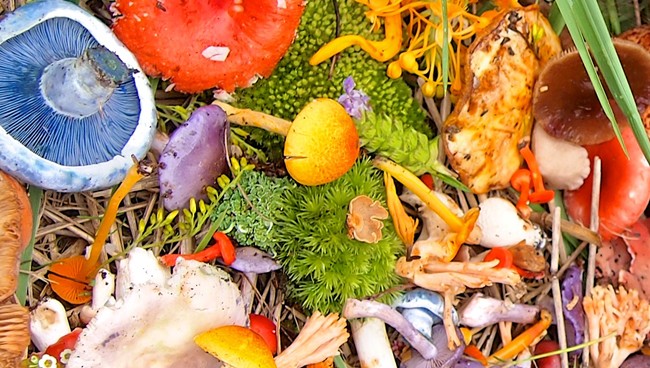 “It seemed like happenstance,” he said. “Twenty years ago, a friend had a farmhouse that I literally paid $65 a month to live in, and though there was a lot of organic food going on, I didn’t know there was such a sheer diversity of wild foods. I only found out a few years ago that we’re in the best place in the continent and maybe even the world for diversity. It’s very striking.”

Muskat started eating from the land because it was free. But he has found over years of taking forest walks on his own that connection to the land that comes with foraging. “I realized there are ways to talk about spirituality through foraging, and that’s what I do now,” he said.

A standard tour takes about three hours in the forest and ends with a tasting of the products the group has foraged. Muskat also works with local restaurants to prepare the foraged goods for free as an appetizer before a meal. He can also cook food outside with the group or organize a competitive “Iron Chef”-style competition for larger groups.

The one thing Muskat can’t always promise on his tour is a specific location or specific type of plant.

“I decide where to go depending on the season because even in Asheville, I’m not sure where will be the best place until the last minute,” he said.