Our truest life is when we are in dreams awake.

Last night, the moon was orange. All afternoon, smoke from the fires clouded the air. For the first time, here in Asheville, I felt unsafe. Until now, as long as the disaster was in Bangladesh, Africa, even New Orleans, even Florida, I didn’t really feel the emergency. Yesterday, when I went outside, to some degree, I literally couldn’t breathe.

We are in the middle of a holocaust: one that’s not just looming on the horizon, but one that has already exterminated entire species. It has killed humans by the millions. Hundreds of thousands more are dying from it every day.

Even so, many of us spent last week in shock. It was a rude awakening. I had to go outside (back when you still could), collect myself, and remember what I believe.

When you look at the big picture, the election results are really no surprise. And the big picture I see is beautiful. This is a hopeful, exciting time.

This morning, I happened to be up for the full moon: at 6:52 AM, to be exact, so I shuffled my World Spirit Tarot deck and drew three cards. Here’s what came up: 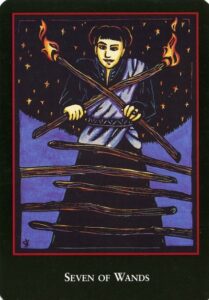 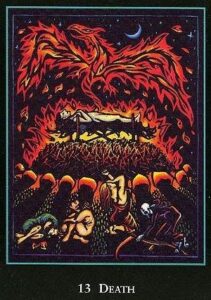 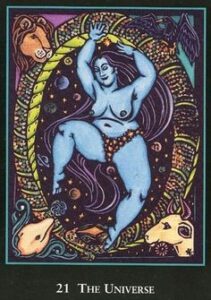 To understand what this might mean, a brief lesson:

The tarot is made up of 78 cards. The majority are arranged in four suits, just like a regular playing card deck, except that each suit has not three but four “court” cards (King, Queen, etc.), 56 cards in all. A regular playing deck has one additional special card, The Joker. The tarot deck has The Joker (called “The Fool”) and 21 other special cards. These are known as the Major Arcana or “trumps.” The trump cards are numbered 0 (The Fool) to 21.

The first card above, the Seven of Wands, is “Courage.” The last, The Universe, is basically the ultimate fulfillment of all possibility. And in the middle, we have Death. And from the dying body, a new beginning. I really drew these cards.

Years ago, I heard a man on the radio making a speech. He said he wasn’t worried about the way things were going because he already knew where we’re headed. He said it was like reading a book and skipping ahead to the last chapter. The book he had read was The Bible, and the last chapter, Revelation.

The word revelation is a translation of apocalypse, which means “uncovering.” What is being uncovered, as the world burns, is the truth: no less than the meaning of life. When you know the meaning of life, that is, what this is all about, what is really going on, then life isn’t so scary anymore. You know where this is all headed. So where are we headed? What is the truth?

The truth is that life is like one big dream. Have you ever dreamt and known that you were dreaming? The few times that I have done so, I experienced an unparalleled sense of freedom and joy that comes with it. That is where we’re headed.

Most of us don’t know the truth. We don’t see the world for what it really is. We go through life unconscious, asleep. The freedom that comes from seeing the world as it truly is is something that most of us only experience in death. But as the old world passes away, we are waking up, not out of this dream, but within it.

To be awake means, first and foremost, to know who you truly are. Most of us don’t know who we are; we know only our ego. The ego is your persona. The word persona means “mask.” The ego masks our true identity from everyone, even ourselves.

We are witnessing not only an unprecedented influx of consciousness at this time, but also an entrenchment and intensification of the ego. Some religious institutions will be open to the new consciousness; others will harden their doctrinal positions and become part of all those other man-made structures through which the collective ego will defend itself and “fight back.”

Some churches, sects, cults, or religious movements are basically collective egoic entities, as rigidly identified with their mental positions as the followers of any political ideology that is closed to any alternative interpretation of reality. But the ego is destined to dissolve, and all its ossified structures, whether they be religious or other institutions, corporations, or governments, will disintegrate from within, no matter how deeply entrenched they appear to be.

The most rigid structures, the most impervious to change, will collapse first. This has already happened in the case of Soviet Communism. How deeply entrenched, how solid and monolithic it appeared, and yet within a few years, it disintegrated from within. No one foresaw this. All were taken by surprise. There are many more such surprises in store for us.

The election results were the most shocking news I had gotten since 9-11. I wrote a similar essay then too, fifteen years ago. It might as well have been yesterday.

What we’re seeing is the end of something thousands of years old. You can call it patriarchy; I call it civilization. Either way, it is based on the ego. Civilization is not just a cancer: it is cancer. And as too many of us know, nothing with cancer lasts long.

The old world is dying. I give thanks for that. I want to live in a world where people are awake. I want to see it, to be a part of it, and to help bring it about in my lifetime.

Most people in this country are fed up. The system isn’t working. The election was not just a triumph of racism, sexism, and xenophobia but a cry of despair. When I’m frustrated, I know one of the first things I do is to look for someone to blame. It’s the classic nightmare: there’s always at least one monster or “bad guy” out to get us. And it’s why a nightmare only gets worse — until we wake up.

As with any nightmare, there’s two ways this can go. We can wake up out of the dream; that’s what dying is. Or we can wake up within it.

Few of us can ever tell when we’re dreaming. Many people don’t know it’s even possible. You can see what a challenge, then, that “snapping out of it” can be. It’s what being “enlightened” means.

Waking up, becoming enlightened, and ending the nightmare is actually quite simple. It can be summed up in two words: love everything. The only system we have to change is the idea of “good” and “bad.” The only thing we have to realize is our unity.

That’s the problem with democracy: when two sides are just about equal, we just flip back and forth between them. Any “progress” on one side is reversed by the other. The only system that can make lasting progress is one that has no losers. It’s called consensus. Believe it or not, it is possible, even on a large scale, to get everyone to agree. There are a few basic things that everyone can agree on, and figuring out how to make them happen is the easy part.

The fundamental requirement for consensus to work — and the reason things are not working now — is that we need to be in our hearts: that is, in our bodies, not just our heads. Otherwise, our thoughts are disconnected from reality. You have an ideocracy, not just an idiocracy. Because at that point, it really doesn’t matter what you believe.