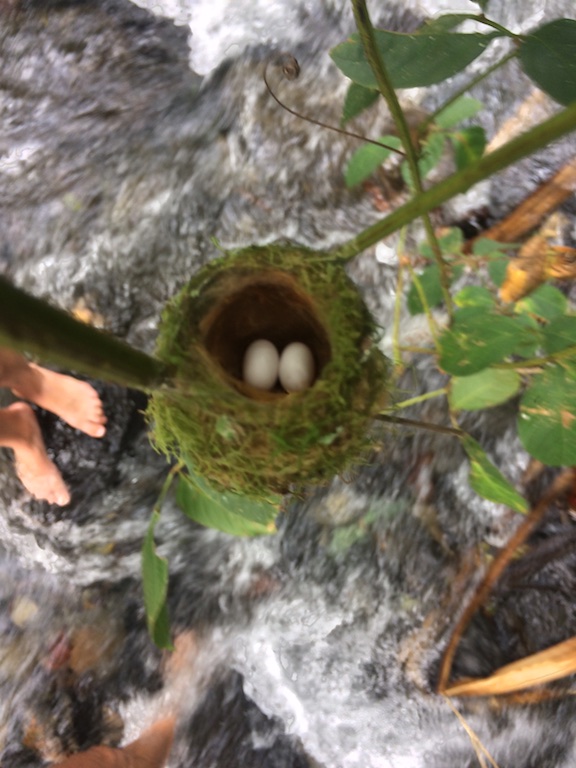 I could not so desire what was not my own.
And what is our own, we cannot lose.

This morning, I woke from a dream. I came home to a group of young people, an older woman, and a child. I began to sob intensely. The snot was like a cord. It was like a vein or an artery coming out of my nose. They were all surprised. It seemed out of proportion. This was not my birth family. I let it come.

As I woke, I felt a sense of roaring. I felt energy coming out of my hands. I remembered something I had been told many years ago. “Know your power.” I’ve been regaining my power ever since.

For so much of my life, I have not been myself. My power, beneath all the traumatic socialization of domination culture, is to simply be myself. It’s the power and beauty of Nonviolent Communication, one of the best tools I’ve found for recovering who I am.

I woke realizing that allowing, accepting, loving is what life is all about. It’s what the “mystical experience” is all about, whether we get there through meditation, drugs, a near death experience, or the everyday practice of loving. Life is about retaining or regaining who we really are. Spirituality is about letting the world be what it is. Both are permission to be.

Much of this realization had come to me the night before, while reading Johann Hari’s Lost Connections. I remembered how, many years ago, my understanding of life coalesced into a simple illustration, a word, a logo: M/e.

M/e is my true self split up, broken. What it is broken by (or split into) is means-ends thinking. Means-ends thinking, or M/e, is doing things not because you want to but because you think you have to. It’s doing one thing in order to get something else. It’s the difference between intrinsic and extrinsic motivation. It’s also known as working. Work is the opposite of acceptance, the power and freedom to be.

In civilization, this is how we’re raised. Our whole culture is a means to an end. We work rather than play. We don’t allow ourselves or others to simply be. Instead, we have to do. We have to perform. Marshall Rosenberg, the founder of NVC, calls this “domination culture.” I call it, do-m/e-nation.

When urged to settle down and work the land, Smohalla, one of the early founders of the Ghost Dance movement, said, “my young men will never work, for men who work cannot dream.” My dream reminded me that life is a dream: it’s civilization that makes it a nightmare. When we have a nightmare, we believe we have to do something but we can’t manage to do it. If we knew we were dreaming, we wouldn’t feel that pressure. It wouldn’t feel like life and death.

Civilization/domination makes life a nightmare because we forget who we really are. And this is the key: that “we” is really Me. When you know you’re dreaming, not only is there nothing you have to do; there are no “others” either. You know you’re not in the dream; the dream is in you.

Life is change. Change is birth, and simultaneously, death. But that is only of perceived parts. The whole does not die, it only changes. And that whole is who we really are.

If a fish is born in your aquarium and you call it John… and two minutes later he gets eaten by another fish, that’s tragic. But it’s only tragic because you projected a separate self where there was none. You got hold of a fraction of a dynamic process, a molecular dance, and made a separate entity out of it.

When we believe we have to do something, or that things have to be a certain way, this only happens when we care about certain things. That means we care about the survival of those things. And that means that to us, change is a matter of life and death. But life and death only happen to parts, not the whole: not to Me. Not if it’s all a dream.

In domination culture, when we’re split into M/e, we resort to means-ends behavior. We do whatever we think we have to do to survive. Consequently, we do violence to life, to our own life, to the present. We try to use it, to use “others” when they are just the flip side of a false division, an illusion including the ego. This is how life becomes a nightmare.

Just as a dream is an illusion, self-preservation is a delusion because your attachment is to parts, not the whole. It’s as if you were afraid to cut your fingernails or your hair, or to take a shit, or piss, or to eat, or to have sex: to take someone or something in, physically or emotionally, or to say no. These all amount to being afraid make a choice, because choosing always means letting go of some things and taking others on. That’s why it’s called a decision, which means “to cut off.”

But these are all just fears of the ego. They are the cares of a boat on the river, not the river itself. It all comes from our perception of parts. It happens when we don’t know we’re dreaming.

When you’re a part in space, you can only be here or there. Add time, and you can be at the wrong place at the wrong time. Where is wrongness, though, if nothing matters, if it’s all the same to you? If you’re the only one playing a game, and it’s the only game there is, you can’t lose.

And yet, acceptance is not all that life is about. Love for everything is one thing, but choice is another. And life runs on both.

Acceptance is the feminine. Choice, desire, direction: “I want this, not that,” is the masculine. Masculinity is encapsulated in testosterone. Sometimes it seems as if the entire split into M/e is contained in one chemical. It would seem as if a single hormone is the source of our delusion. Yet testosterone is essential to humans just as choice is foundational to the universe.

There’s no wrong in wanting. Life wants life: it’s a game to be played. Some call it The Great Work, and it’s the only game in town. And in this great work/play, it’s the masculine that brings chaos into order, slaying the dragon: taming it, channeling it, giving it direction.

Masculine and feminine, right and left brain: these are two sides of the same coin. Can we see both? “Love,” says Catherine Lacey, “is a compromise for only getting to be one person.” Can we have our dream and eat it too? Does life have to be a nightmare, or can we dream lucid, awake?

I think so. But only in time. Everything takes time. In space, everything needs space. In allowing, in a space of love, you let people be where they’re at. You let things be as they are. Everyone is just growing up. Everything is growing. Everything is Life changing, the entire universe moving by choice, in freedom, and ultimately, in beauty. At first, we are horrified, and at last, in awe.

Awe. Ahhhh… ecstasy. No judgment, no resistance. No justice; just this. No scampering for survival, no hanging on. Clinging, and letting go. It’s all a dream, a game we cannot lose, except to forget who is playing.