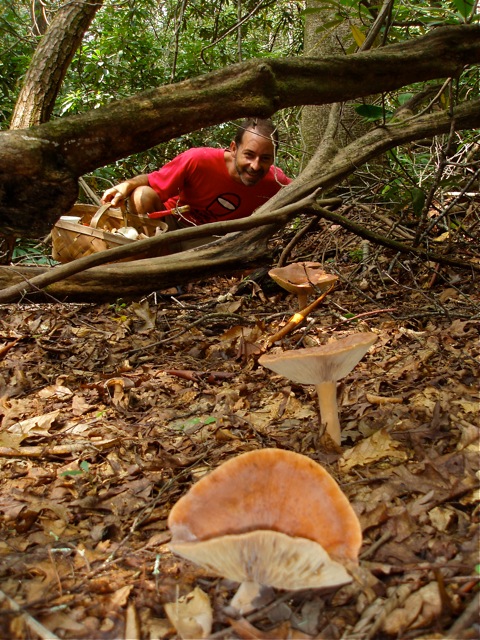 Mushrooms boast some of the strangest names on the planet: chicken lips, club-headed beetle eater; velvet earth tongue. They come in all shapes and sizes, from parasols and trumpets to human ears and coral reefs. They emanate the aroma of anise, seafood and maple syrup. Some, like the orange jack-o’-lantern, even glow in the dark.

Alan Muskat, a.k.a. “The Mushroom Man,’ wants you to know all this and more about the fungus among us. For the past decade, the wiry-haired amateur mycologist has been hunting “flowers of the fungi world,” either alone, with his students at the North Carolina School of Holistic Herbalism, or on guided tours through the forests and fields of Asheville, North Carolina.

After earning a degree in philosophy of ecology from Princeton, Muskat lived in just about every corner of the country before settling down in western North Carolina, a cool, moist region home to an estimated 3,000-4,000 types of chanterelles, leatherbacks, and other mushrooms. He started tutoring a few home-schooled students and giving tours, and the popularity of his seminar, ‘Stalking the Wild Mushroom,” spread. Before long, Muskat’s offbeat hobby had mushroomed into a full-blown career, and he became the go-to guy for many of the gourmet restaurants in Asheville.

These days Muskat prefers to spend less time purveying porcinis and more time leading expeditions for gourmands, chefs, and curiosity seekers. During the walks, which sometimes last several hours, students learn how to harvest, identify, and cook up their discoveries. They also hear Muskat tout the medicinal and ecological value of mushrooms and describe popular beliefs and folklore. The ’shroom, for example, is merely the fruit of the fungus (which, incidentally, is not a plant). Only a half-dozen North American mushrooms are deadly, though others can make you violently ill. And mushrooms have more protein than any vegetable except soybeans.

Muskat credits the friend who years ago handed him a book about mushrooms and ignited his passion for the often-misunderstood species. After that he says, “It just totally grew on me.” Like a fungus, no doubt.