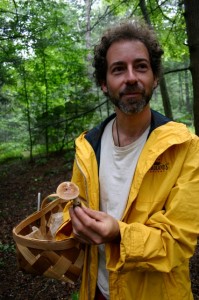 He collects dandelion greens and nettles for salads, and he harvests an assortment of wild berries, but it’s his talent for tracking down tasty toadstools that’s earned him the nickname “Mushroom Man.”

“Once you attune your eyes to mushrooms, you notice what you’ve never noticed before: hidden edible treasures, in plain sight,” says Muskat.

For 15 years, he has been gathering mushrooms from lush Southern Appalachian forests. He has sold hundreds of pounds of this found food to regional restaurants each year, and he also guides mushroom workshops and expeditions. Muskat’s focus on fungus has attracted the national spotlight: he has been featured on food shows nationwide and dined with celebrity cooks from the country’s finest restaurants.

“Mushrooms are as delicious as they are nutritious, and they’re all fresh, local, organic, and free,” says Muskat. They’re loaded with minerals and vitamins, especially B and D, and they taste meaty because they’re packed with protein. So why aren’t more people gathering these incredible edibles? Fungophobia, says Muskat.

“Mushrooms are far more beneficial and less dangerous than most Americans believe,” he says. There are over 10,000 mushroom species on this continent, and only five or six are deadly poisonous. He encourages novice mushroom hunters to focus on the five most common mushrooms in Southern Appalachian forests—and their nonedible look-alikes. The best way to learn is to hike with an expert.

“Eating wild mushrooms—like driving and having sex—has some measure of risk. But practically everybody does it anyway,” he says. In Spain, France, Russia, and most of the non-Anglo-Saxon world, mushroom hunting is virtually a national pastime: children gather mushrooms before they can read and write, and mushroom meals are a culinary conversation piece. Even here in Southern Appalachia, mountain folk religiously gather morels every spring.

Harvesting mushrooms takes some work, but not as much as you might think. Muskat finds more mushrooms in neighborhoods than in remote forests. And don’t worry about over-harvesting mushrooms, says Muskat. Picking mushrooms is like picking berries; as long as you don’t destroy the fungus from which it grows, mushrooms will continue to sprout. Mushrooms are the fruiting part of a vast underground network of fungus strands called mycelium. These underground webs are vital in recycling nutrients, feeding trees, and replenishing ecosystems.

“Most of us want to use mushrooms, typically for food or medicine. But you will gain far more from befriending fungi than by using them,” says Muskat. “Making friends with fungi involves getting to know them: understanding and appreciating their role in the environment and learning what they want in exchange.”

Muskat uses clever and creative methods to educate others about mushrooms and their essential ecological roles—including humorous memory aids (the poisonous Amanita mushroom is pronounced like the 80s Hall and Oates song “Maneater”) and even a mushroom rap. It’s all aimed at reconnecting people to the wild.

“Wild food makes you wild—that is, free,” he says. “Gathering your own food is a lesson in self-esteem that you can carry over into other areas of your life. Can you learn the skills and trust yourself enough to eat what you alone have identified, or will you always need to eat processed food wrapped in cellophane?”

• In general, the more mature the forest, the more mushrooms you’ll find.

• The best time to search for mushrooms is about five days after a good rain.

• Avoid areas where mushrooms could have soaked up toxins, like a golf course, well-manicured (pesticide-laden) lawn, or places downwind of a coal-fired plant.

• The first time you are eating a new edible species, cook some, but eat only a tablespoon. Any bad response—like nausea or an upset stomach—will usually happen within two hours.

• Cook wild mushrooms well: When a guidebook says a variety is edible, it’s talking about the cooked version of it.