Forage for the Ages 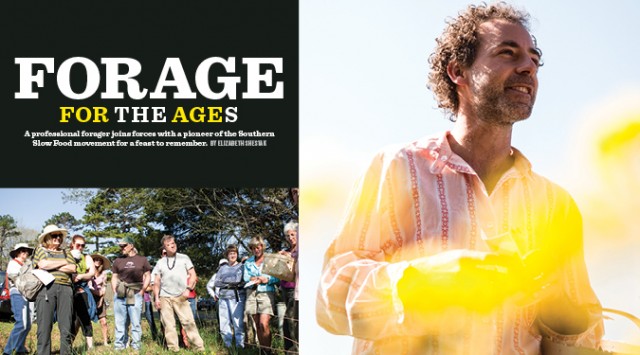 On one of the first warm days in an abysmally cold Carolina spring, I park my car on the side of the road where a crowd has gathered. We are in Graham, North Carolina, the home of local apothecary Suki Roth. She has kindly lent her property to this motley crew, led by Alan Muskat, so we might learn something that for eons was second nature—the art of foraging.

Muskat is a professional forager based out of Asheville. He emanates a peaceful energy, just the right amount of scruffy and earthy to lend him complete legitimacy without tempting skepticism. You quickly become a disciple, learning that long before crops were planted in rows, soil was measured for alkalinity, and the reaching, metallic arms of irrigation systems dotted our rural landscapes, we foraged. We learned that if something was sweet, it was not poisonous. Before we called it a mustard plant, the likes of which include broccoli and cauliflower, the yellow wildflowers from this family were munched on casually the way today we might mindlessly snack on a bowl of pretzels. 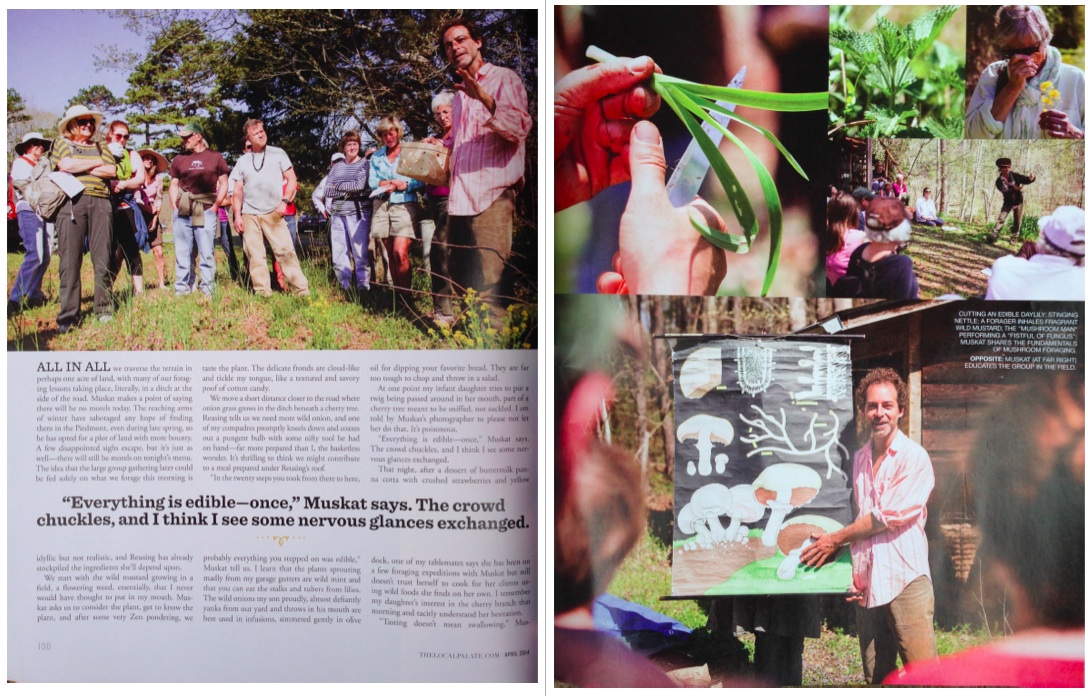 I am excited to learn about the edibles growing wild in our midst largely because my three-year-old fancies himself a forager already. He is proof that this comes naturally, as he is constantly pointing to what grows in our yard and asking if he can eat it. I will love showing him what he might nibble on beyond the herbs we have planted in our flowerbeds and the onion grass that makes up a good portion of our lawn.

Muskat was invited to lead a forage by local chef and James Beard winner Andrea Reusing. Her Chapel Hill restaurant, Lantern, was among the first in the region to embrace local and seasonal menus, and she had crushes on farmers long before such love affairs became vogue. That she and Muskat are friends is interesting, for as much as Reusing has promoted farming as the kindest form of food consumption, Muskat insists it is ultimately harmful. 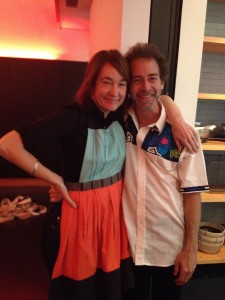 Later that night, Reusing will introduce her friend at the dinner she is serving at Lantern with a menu centered around locally foraged ingredients. With her long brown tresses pulled into a loose bun at the nape of her neck, she will say, “Alan Muskat changed my life, I think, when he told me he did all he could to avoid agriculture.”

But before dinner, before the cocktail made with nettles and gin, the egg custard with teensy freshwater shrimp and ramps, the sticky rice served with morels, burdock, and onion grass, we must forage Suki’s yard.

Assuming there will be some serious trekking involved, I first harness my infant daughter into the carrier, then curse myself for not bringing a basket of some sort. I picture it dangling from the crook of my arm, full of longish green plants, dark, musty mushrooms, and prickly flowers that will surely taste like home, somehow. I also figure we’ll venture into the woods for low-lying treats, a Hansel and Gretel-inspired fantasy I can only attribute to my suburban girlhood imaginings.

All in all we traverse the terrain in perhaps one acre of land, with many of our foraging lessons taking place, literally, in a ditch at the side of the road. Muskat makes a point of saying there will be no morels today. The reaching arms of winter have sabotaged any hope of finding them in the Piedmont, even during late spring, so he has opted for a plot of land with more bounty. A few disappointed sighs escape, but it’s just as well—there will still be morels on tonight’s menu. The idea that the large group gathering later could be fed solely on what we forage this morning is idyllic but not realistic, and Reusing has already stockpiled the ingredients she’ll depend upon.

We start with the wild mustard growing in a field, a flowering weed, essentially, that I never would have thought to put in my mouth. Muskat asks us to consider the plant, get to know the plant, and after some very Zen pondering, we taste the plant. The delicate fronds are cloud-like and tickle my tongue, like a textured and savory poof of cotton candy.

We move a short distance closer to the road where onion grass grows in the ditch beneath a cherry tree. Reusing tells us we need more wild onion, and one of my compadres promptly kneels down and coaxes out a pungent bulb with some nifty tool he had on hand—far more prepared than I, the basketless wonder. It’s thrilling to think we might contribute to a meal prepared under Reusing’s roof.

“In the twenty steps you took from there to here, probably everything you stepped on was edible,” Muskat tell us. I learn that the plants sprouting madly from my garage gutters are wild mint and that you can eat the stalks and tubers from lilies. The wild onions my son proudly, almost defiantly yanks from our yard and throws in his mouth are best used in infusions, simmered gently in olive oil for dipping your favorite bread. They are far too tough to chop and throw in a salad.

At one point my infant daughter tries to put a twig being passed around in her mouth, part of a cherry tree meant to be sniffed, not suckled. I am told by Muskat’s photographer to please not let her do that. It’s poisonous.

“Everything is edible—once,” Muskat says. The crowd chuckles, and I think I see some nervous glances exchanged. 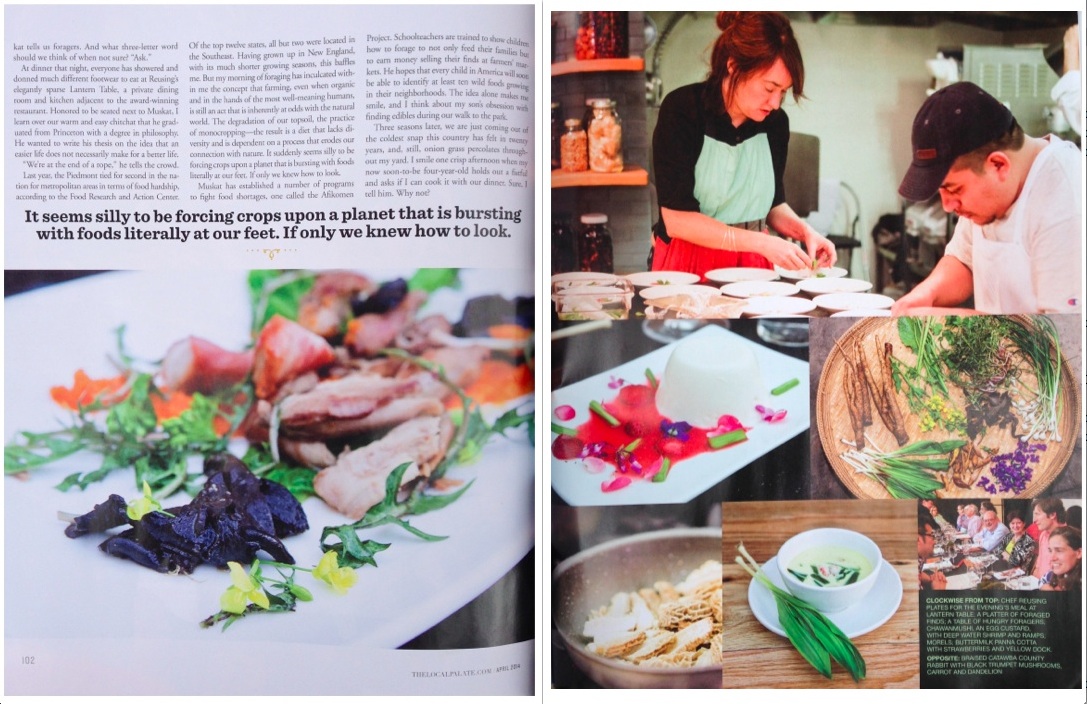 That night, after a dessert of buttermilk panna cotta with crushed strawberries and yellow dock, one of my tablemates says she has been on a few foraging expeditions with Muskat but still doesn’t trust herself to cook for her clients using wild foods she finds on her own. I remember my daughter’s interest in the cherry branch that morning and tacitly understand her hesitation.

“Tasting doesn’t mean swallowing,” Muskat tells us foragers. And what three-letter word should we think of when not sure? “Ask.” 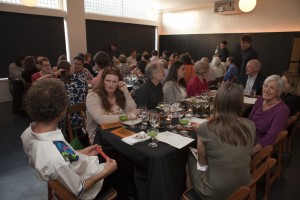 At dinner that night, everyone has showered and donned much different footwear to eat at Reusing’s elegantly sparse Lantern Table, a private dining room and kitchen adjacent to the award-winning restaurant. Honored to be seated next to Muskat, I learn over our warm and easy chitchat that he graduated from Princeton with a degree in philosophy. He wanted to write his thesis on the idea that an easier life does not necessarily make for a better life.

Last year, the Piedmont tied for second in the nation for metropolitan areas in terms of food hardship, according to the Food Research and Action Center. Of the top twelve states, all but two were located in the Southeast. Having grown up in New England, with its much shorter growing seasons, this baffles me. But my morning of foraging has inculcated within me the concept that farming, even when organic and in the hands of the most well-meaning humans, is still an act that is inherently at odds with the natural world. The degradation of our topsoil, the practice of monocropping—the result is a diet that lacks diversity and is dependent on a process that erodes our connection with nature. It suddenly seems silly to be forcing crops upon a planet that is bursting with foods literally at our feet. If only we knew how to look.

Muskat has established a number of programs to fight food shortages, one called the Afikomen Project. Schoolteachers are trained to show children how to forage to not only feed their families but to earn money selling their finds at farmers’ markets. He hopes that every child in America will soon be able to identify at least ten wild foods growing in their neighborhoods. The idea alone makes me smile, and I think about my son’s obsession with finding edibles during our walk to the park.

Three seasons later, we are just coming out of the coldest snap this country has felt in twenty years, and, still, onion grass percolates throughout my yard. I smile one crisp afternoon when my now soon-to-be four-year-old holds out a fistful and asks if I can cook it with our dinner. Sure, I tell him. Why not?