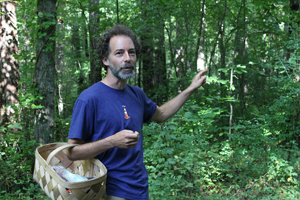 The two-day event began with a foraging trip for the chefs. Renowned wild foods expert and wily edu-tainer, Alan Muskat of No Taste Like Home, took the chefs into the woods armed with baskets and wielding the foraging world’s version of a spork, an elementary contraption uniting knife and brush into what Muskat calls a “brife.”

Muskat helped the group identify 25 edible discoveries and countless inedible ones. Moss left with a full basket including spicebush berries, spruce pine needles and wild greens, which he used in a quail brine for his contributing course.