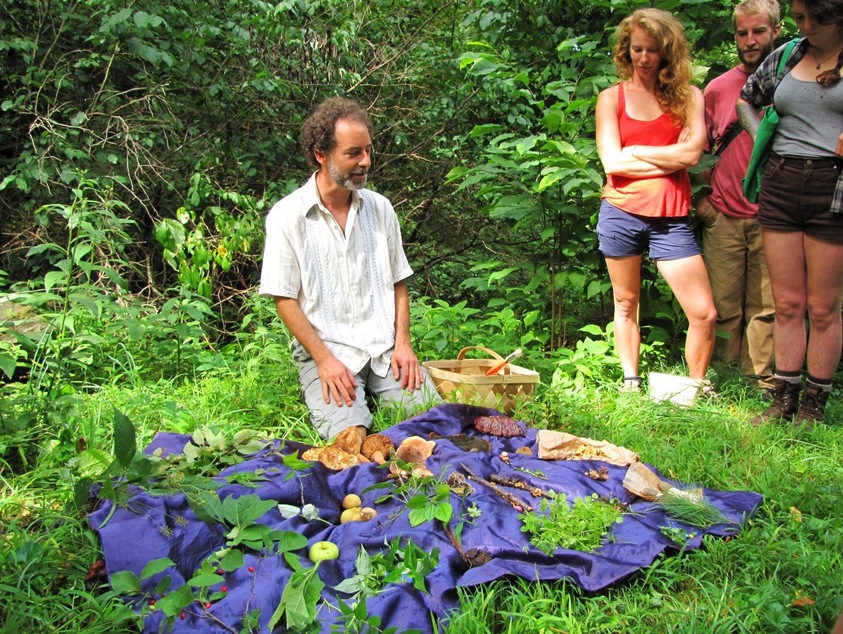 The FAQ section on Alan Muskat’s No Taste Like Home Web site addresses 50-plus questions that potential participants in his wild-food foraging tours might pose.

But it failed to answer my only question: How do you distinguish between a wild mushroom that’s merely delicious and one that could land you in a dialysis clinic? Or, in Muskat’s parlance: When is a wild food edible and unforgettable vs. edible and regrettable?

Call me cautious, but that’s my No. 1 concern when I sign on for one of Muskat’s forest-to-table tours in and around Asheville, N.C. I run through a mental inventory of what I’ve heard about the hazards of fungi: the dinner party that ended in an emergency room after the hostess unwittingly fed her guests poisonous mushrooms. An interview in which The Horse Whisperer novelist, Nicholas Evans, discussed his and his wife’s need for kidney transplants after he whipped up some foraged mushrooms for lunch.

I phone Muskat to discuss my concerns.

“Americans have a bad case of cultural fungophobia,” he grouses. “If foraging is so dangerous, there wouldn’t be a human race.”

Muskat, a.k.a. the Mushroom Man, has a point. But foraging as a primary means of sustenance vanished long before the invention of 7-Eleven.

Now it’s gaining traction again. Consider forest-to-table eating an evolution of the farm-to-table movement. And nowhere is it more visible than in Asheville, a bastion of laid-back cool cradled in the Blue Ridge Mountains.

The Asheville Mushroom Club sponsors regular forays into the woods. The Mushroom Central shop here offers weekly clinics and growing kits. The nation’s first “edible park,” with 40-plus fruit and nut trees and dozens of wild edibles, took root here almost two decades ago. And throughout the region, from April to November, enthusiasts are on the prowl for black morels, wild ginger, elderberries, sweet birch twigs and more.

And then there’s the Mushroom Man, Asheville’s foremost evangelist of “find” dining.

Muskat can’t say where we’ll be foraging until the night before we meet. His tours are like underground clubs or closed-door restaurants. The location changes depending on conditions.

Foraging forays are also akin to whale-watching tours in that there’s no guarantee that you’ll find what you came for. “Foragers can’t be choosers,” Muskat announces to our group of 16, convened in the sun room at Laughing Frog Estate, a 300-acre retreat about 30 minutes’ drive northwest of Asheville.

The Miami native is short and wiry, and his beard is flecked with gray. He’s been foraging for 20 years, he says, and got into it “because my family loves getting something for nothing.”

It’s cool, damp and hazy — perfect foraging weather. The Blue Ridge unfold for miles around us. Late-summer wildflowers are on the verge of surrendering to the onslaught of fall color that elevates this country from merely gorgeous to magnificent.

While Muskat and his crew organize the gear, William Dissen, chef-owner of the Market Place restaurant, passes around a basket of flaky scones. Dissen is a fan of incorporating wild foods into his menus; he estimates that he buys 2,000 pounds of mushrooms annually from local foragers, in addition to what he and his staff unearth. After the tour, he invites us to drop by his downtown eatery with our finds, which he’ll incorporate into an appetizer.

Before we head into the woods, Muskat takes inventory of our reasons for coming. Nichole from Tallahassee says that she needs to change her relationship with food. Her mother says that she’s just along for the ride. She hates mushrooms. Some are seeking the ultimate in fresh food. Others want to develop greater self-reliance. Some want to forge a connection with the land.

Me? I just enjoy a goal-oriented walk in the woods.

And so we set out along the winding driveway, clutching foraging baskets and “brifes,” a brush/knife combo that Muskat created for cutting forage and brushing it clean. Within a few feet, he stops and hunches over a weedy patch at the edge of the asphalt, where he identifies wild buckwheat, wood sorrel and chickweed. “We could make a salad right here if cars weren’t spewing on it,” he says. “I did pick up a road-kill possum. If anyone’s interested, it’s in my trunk. Possum is awesome!”

There are no takers.

As we continue on, someone spots a mushroom in the crook of a tree. It’s a fat red beauty at eye level, so conveniently positioned that anyone with an ounce of skepticism realizes that this is no chance encounter.

In fact, Muskat admits, he placed it there, along with a nearby milk cap and other choice specimens.

Consider them food for thought.

“Even if we don’t find anything to put in your mouths today, hopefully you’ll be fed” psychically, he says.

Although Muskat certainly doesn’t advocate playing mushroom roulette, he tells us that common varieties of wild mushrooms — morels, milk cap and ox tongue, to name a few — are delicious. Others “won’t kill you but will make you wish you were dead,” he notes. And some, like the aptly named destroying angel and its cousin, the death cap, are responsible for 90 percent or so of mushroom-related deaths in this country.

How to tell the difference?

Still, the odds are 90 percent that if you eat some random thing from the woods, you’ll be okay, he assures us.

With that, he sets us loose to forage for whatever looks potentially tasty in the wilderness that lies just beyond Laughing Frog’s tennis court. On the trail, we pluck tart-sweet autumn olive berries. It’s an invasive species, but Muskat doesn’t discriminate. “I say, if you can’t beat it, eat it.”

We deposit our contributions on a satiny cloth spread on the ground. There’s chickweed and sweet birch; Queen Anne’s lace root, a feral carrot; purslane, a tasty green that’s high in omega-3; and the mushrooms that Muskat has brought along for show-and-tell.

I withdraw my measly offerings from my basket: assorted green stuff and, more promising, three mottled berries the size of marbles and almost as hard. “What do you think they are?” I ask hopefully.

“I have no idea,” Muskat replies.

I toss them back into the woods. Odds are, they won’t kill me. But you never know.