Foraging for Food, Fun and Adventure 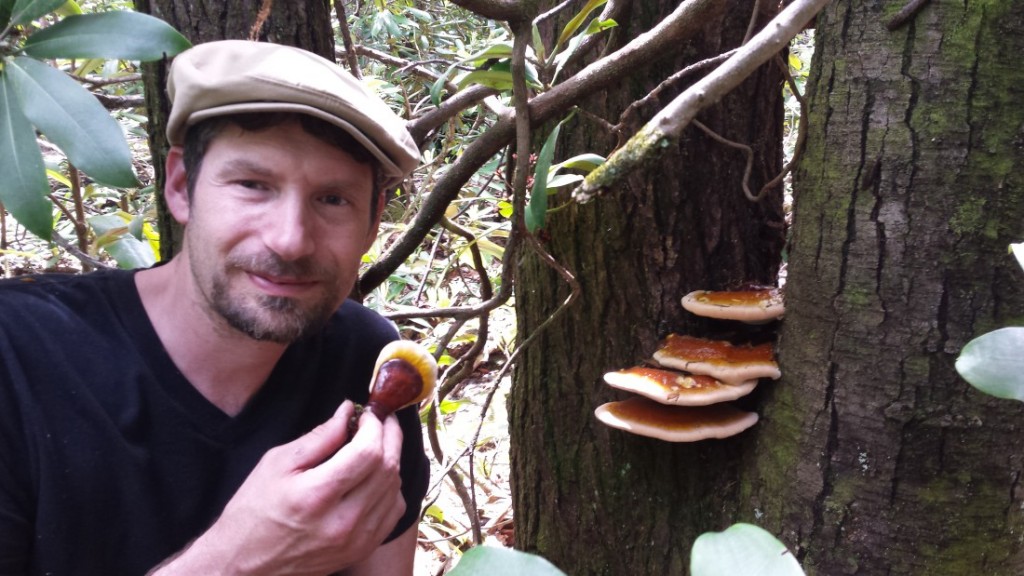 Old Man Winter leaves town every year just when the foraging starts getting good. He’s probably loading up somewhere on freezer bread or deep-fried reindeer, while the people in Asheville chomp spring “weeds” like a lawnmower set on low. Not to mention other spring edibles that aren’t plants: ants, groundhogs, mushrooms, etc.

I call myself a forager because I’ve been at it for so long. But I must admit that even though I picked bags of stinging nettles the other day to make a yummy spring pesto, I still do most of my grocery shopping at stores. Foragers live along a spectrum, and I’m fairly moderate, somewhere on the tamer end. I tag along occasionally with those who hew to a wilder code of living and eat closer to the land.

The other day I served as assistant to well-known local, Alan Muskat, “The Mushroom Man,” on a wild foods tour he had arranged for some out-of-towners. Muskat is much more knowledgeable and practiced than I when it comes to foraging. Although the particular spot can’t be divulged, our tour through the woods was a reminder that foraging puts us in touch with a lot more adventure than just filling our stomachs with forest foods. 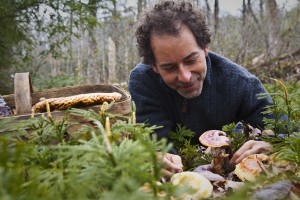 We started down the trail and all along the way Muskat pointed out edible plants. There were far more varieties than could be found in any grocery’s produce section, including greenbrier, Indian cucumber, sourwood leaves, sassafras leaves, chickweed, cleavers, partridgeberries, garlic mustard, trout lily, grape leaves, violets, dandelion and more. These are their common names. Before you try to find them yourself, make sure you’re looking for the right variety. The same common name can refer to two different plants; one could be poisonous and the other edible. For example, consider hemlock (the tree, Tsuga canadensis) and hemlock (the poisonous plant, Conium maculatum). Wild foods identification can be done with a guidebook, but the best guidebook, Muskat likes to say, is one with two legs. Either way, make sure to get expert ID on any wild foods before tasting.

With that disclaimer stated, and with most readers now probably too scared to try foraging at all, the late Frank Cook, plant guru, told me once that you can reach out and grab a handful of plants and most of them would be harmless. The plants along the trail are like a “green wall” to most people, Cook would say. I can attest to that. Even the couple out with me and Alan were amazed at everything they were finding. How could these riches have been there all along?

The reality though is that most people, short of apocalypse, won’t forage as a way of life. It’s just too convenient to buy most of our food. Even so, it doesn’t mean we can’t all get out in the woods to forage for some of our food. Plus, there’s adventure that comes along with those slow, concentrated walks.

If I had not gone out with Muskat that day, I would have missed him scooping up a plump carpenter ant, slicing it in half with an audible crunch that left half of it wriggling on his bottom lip, until his tongue licked it in. This was not just a stunt; it was a lesson. Insects are supposed to be the big solution to world hunger and achieving higher food-production efficiency. People all over Earth use them as a major food source, but for some reason Americans are, in general, too squeamish to come to the table and entertain the possibilities.

As we sat studying edible plants by a creek, an unleashed dog rushed by. A high-pitched squeak ensued, like a defective squeeze toy. Muskat shooed the dog away and there lay barely breathing and crushed, a baby bunny. He gently covered it back up with the momma rabbit’s nest materials. But when we came back to check, it was clear the dog dealt a killing blow.

On the walk back to the trailhead where our cars were parked, with baskets full of edible greens swinging, Muskat would erupt into mushroom raps, answer questions or duck into a bushy tunnel and reemerge with another plant to talk about.

On one of those bushwhacked forays off the trail, we were standing around admiring an outcropping of orchids when everyone screamed at me to watch out. Watch out for what, I thought, and looked down to see two snakes a couple of inches from my feet. That reminded me of one summer of surprises at Bent Creek when I counted nine copperheads, all lying quietly on the trail, as I hiked carefully by them. Wild edibles aren’t the only thing to watch for in the spring.

When the tour was over, everyone went on their separate ways. A few minutes later, my phone beeped with an incoming text. It was Muskat, telling me he had come across some groundhog roadkill. Let’s cook it. Never mind, the vultures had already gotten to it first.