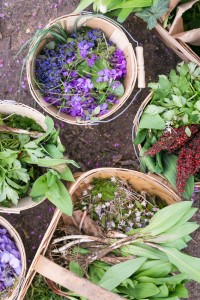 When I hopped in Alan Muskat’s old convertible in a health food store parking lot in Asheville, NC, the only thing I expected from the day to come was piles and piles of wild morels. Upon return eight hours later, with not a single mushroom in hand, I was not disappointed in the least.  I was covered in dirt, all I had to eat was a handful of edible flowers and Alan’s homemade bear jerky (wrapped in raw ramp leaves of course). I was soaked to the bone from a brief but formidable rain shower, and I was two hours late for my next appointment (his car had gotten stuck in the mud). It was a perfect day. 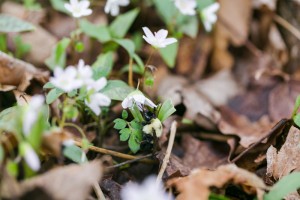 The thing about foraging is that it heightens your perception of the world. A true forager is always foraging, scanning the ground, the trees, the rocks and the duff for surprises and gifts from the earth. You have to look closely, pay attention, and love the hunt. It is no coincidence that mushroom foraging enthusiasts and Buddhists often end up in the same Venn diagram (think John Cage).

Alan has been teaching and foraging professionally for 20 years. He provides North Carolina chefs with unexpected, supremely local ingredients, while he imparts a sense of discovery and profound respect for the practice to his students.

As we drove up the winding roads of a nearby gated community, Alan hugged the steering wheel, searching for morels out the window, guiding the vehicle with his shoulders (I was terrified but played it cool). We had gotten a tip that there was a secret morel spot in the woods adjacent to these suburban homes, and we were hoping to hit the jackpot. If you are a mushroom forager yourself you know that people guard their “spots” with their lives. A tip can be the gift of a lifetime. Mushrooms tend to emerge in the same location year after year, so secrets are worth keeping in this game.

As I squatted over a cluster of wild ramps, digging them out with an old metal spoon, Alan admitted to me, “Morels really stress me out.” He was serious. Morels are a harbinger of Spring; their early arrival makes them even more valuable than their market price. But, the stakes are high — if they haven’t appeared yet, there won’t be any Plan B mushrooms to tide you over.

Alan hated the idea that he might not be able to deliver on his promise of the coveted fungi, but what he didn’t understand was that I wasn’t there for the morels. I was there for the spring beauty, a delicate edible flower that covered the forest floor, the wild ramps, the day lily stalks (yes those are edible and delicious), and I was there to spend a day in the woods, shoving handfuls of greens and blossoms in my mouth with a total stranger. 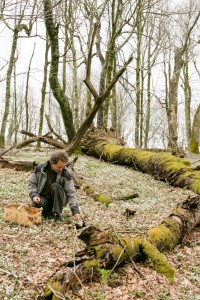 In the moment when Alan recognized in me the makings of a natural-born picker, he asked, “Are you Jewish?” I shot him a look as if to say, “Did you even have to ask?” I had never made the connection between the two practices but he was right. On every edible plant walk you are getting a great deal.  You are the ultimate savvy consumer, the one who figured out how to save a buck and live like a king. Alan’s family (also Jewish) had loved thrift stores and flea markets, they loved the game. Searching for wild foods is the same — everything you reap has a story, a life of its own, and it is easier to enjoy that which is complex and rich than that which is handed to you on a plate. 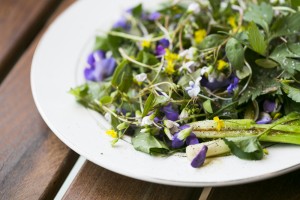 So, soaked and dirty we headed over to a local bar/restaurant, Sovereign Remedies, where Alan’s friends would help us prepare a salad from our bounty that included wisteria petals, spring beauty, mustard flowers, and violets. We grilled that day lily stalk and served it on the side.

After a shared meal and a couple drinks made from wild edibles like burdock root and sassafras, Alan tried to lure me to another special spot where he had plans to shoot a wild turkey. An unusual offer to say the least, but at that point in this protracted adventure, I was quite flattered — I took this invitation as a sign that I had indeed earned my Wild Edibles badge. 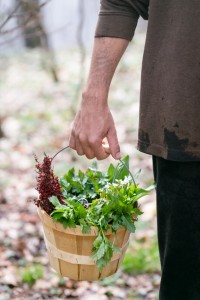