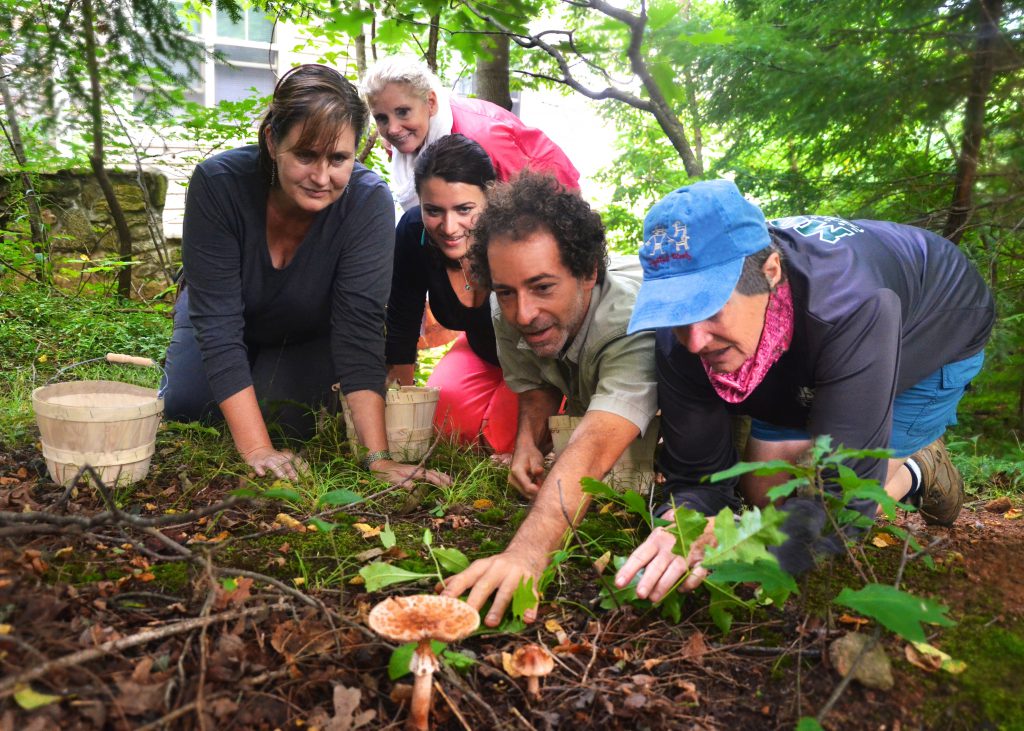 Groups looking to go wild with their food and beverage might consider an unusual teambuilding activity: foraging. These excursions teach participants how to safely gather ingredients — edible wild plants, mushrooms, and so on — in the great outdoors and turn them into a restaurant-quality meal. Farm-to-table meals have been all the rage for years, so forage-to-table seems like a natural next step for culinary-minded groups.

“Think Survivor meets Iron Chef,” says Alan Muskat, who has dubbed himself CEO — Chief Edutainment Officer — of his Asheville, NC-based wild food foraging company, No Taste Like Home. Muskat says that most people who take his tours are surprised how easy it is to find wild edibles. “There are probably over 25 waiting to be discovered within 50 yards of where you are right now,” he says.

Some of his favorite ingredients to forage along the East Coast include mushrooms such as chanterelles and morels; edible flowers that include wild violets, daylilies, and wisteria; shoots including bamboo and Japanese knotweed, which looks like asparagus and tastes like rhubarb; greens including chickweed, dandelion, ramps, and nettle; blackberries, raspberries, blueberries; and nuts including black walnut, which are much more flavorful than store-bought walnuts, and acorns.

After a few hours of foraging, groups head to the kitchen where dinner is prepared with their “catch of the day.” Dishes can include a wild salad, mushrooms served over pasta, stinging nettle fritters, and a berry pudding or other dessert. “The menu depends entirely on what we find,” Muskat says. Beverages include dandelion or chicory-based drinks as well as ginger ale made with wild ginger and root beer made with sassafras.

For a teambuilding component, Muskat has planned Iron Chef competitions where each team is responsible for a different course of the meal. The group has to forage to find the ingredients for their dish.

“Wild Times at The Greenbrier” is a day-long event taking place April 18, July 11, and Sept. 19, where guests will wander through some of the fields and forests on the resort’s 10,000 acres gathering enough wild food for a feast. Greenbrier Executive Chef Bryan Skelding and his team then transform what was gathered into dinner.

“The mystique of it is we are not really sure what we are going to cook as we don’t know what the foragers will bring back. It’s in Mother Nature’s hands,” says Skelding. This Greenbrier activity can also be customized for groups.

“Wild food is ideal for people and the planet,” explains Muskat. “It’s healthier, fresher, and more flavorful than its garden-variety descendants. Basically, it’s all superfood because it’s what we evolved to eat. And being hyperlocal makes it far more sustainable too.”

A Princeton graduate, Muskat’s interest in foraging evolved from his studies, as he majored in philosophy and minored in ecology. “I enjoyed hiking and was cooking for the first time,” he says. “I also encountered Taoism, which is all about getting back to nature. All of my interests combined and I’ve now been doing this for 20 years.”