A woman scheduled to die independently discovers the dharma — and lives twenty more years. Does she have something to teach us? 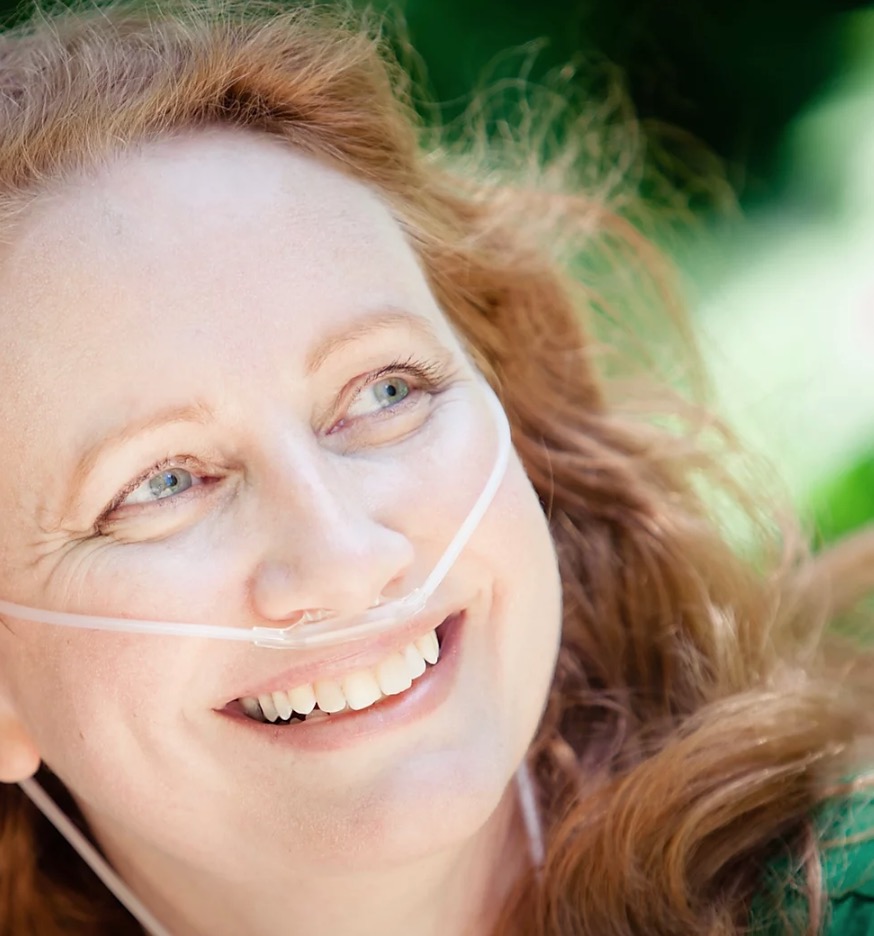 Maureen McCarthy was forced into enlightenment. Born with a rare, genetic disease, her lungs slowly fill up with tiny benign tumors. At age 30, she was given six months to live. At age 53, she’s more vibrant than ever.

As I Stay Dying

Maureen is allergic to all pain meds. She has undergone 12 surgeries to reverse collapsed lungs, all without pain meds or anesthesia. Doctors cry during the procedure.

For decades, Maureen has had migraines. The most recent one started seventeen years ago and hasn’t stopped since.

With only 10% lung capacity, Maureen is supposed to only be capable of talking in a whisper. Yet, she is an animated, full-volume keynote speaker.  Her doctor calls her “the miracle lady.”

Maureen’s migraine barely bothers her. Neither does her terminal diagnosis. Maureen isn’t dying; she’s living as much as the rest of us. Probably more so. How does she do it?

Faced with her diagnosis, Maureen developed what she calls Collaborative Awareness. It’s a way of working with your experience instead of against it. With no exposure to Buddhism or mindfulness, she made it up herself. She now teaches hundreds of people a year. In short, Maureen is like a lama. Is it coincidence that her disease is known as LAM?

When people meet Maureen, they tend to lump her in with cancer survivors and other motivational speakers who encourage others to “be positive.” Nobody thinks of Buddhism as being “positive.” It’s about being realistic, practical: not fighting what you can’t change. This is precisely what Maureen has mastered. She doesn’t run from life. She can barely walk! Instead, she “runs” toward it.

Collaborative Awareness is about seeing how every aspect of life is a relationship. We can have healthy or unhealthy relationships to everything, including pain and death. With Collaborative Awareness, we can  truly embrace the present. This idea has become cliché because we hear it so often. But we hear it so frequently because we need it so much. Our whole culture is based on resistance: not adapting to situations but adapting situations to us. In other words, it’s about having our way. After all, what we call “Progress” is the ability to control our condition. Consider air conditioning:

With enough electricity, we can condition our buildings. But we can’t control the climate. Or maybe, inadvertently, we are. Either way, an increasing number of people are recognizing that “having our way” is unsustainable.

Ultimately, life is not under our control. What we want comes and goes. Life is change. And with climate change, mindfulness becomes even more essential. So how do we do it? How has Maureen befriended her condition? How has she managed to not just survive but to love life, whatever it brings?

Picture whatever is bothering you as another person. Collaborative Awareness is not about telling yourself, “I’m not going to let them bother me.” It’s about saying, “I notice I’m really bothered by this person.” Instead of trying to avoid them, you wonder, “what do they have to teach me?”

You don’t do this because you have to. You do it because you realize that being bothered is like being handed a treasure map. It’s showing you exactly where you need to go to find what you’re looking for. Maureen says “use the stress to find clarity.” As Nirmala, a teacher of nondualism, puts it, “whatever you are experiencing right now is your true love.”

This attitude — of moving towards life instead of pushing it away — is the key. The rest is details. Where there’s a will, there’s a way. Rather than write her will, Maureen is living it. She has developed a relationship design document called The Blueprint of We.

The Blueprint of We is a way to put your commitment to collaboration on paper. It’s a way to spell out what you want: all of you. A Blueprint can be written by one, two or 10,000 people, as long as it’s collaborative. Collaboration is a consensus process. It means every voice matters, no matter how annoying.

G.I. Gurdjieff was a spiritual teacher who led a community in France in the 1920’s. The community included a man that no one else could stand. Everyone said he was rude, abusive, and lazy. He barely bathed. He didn’t do his share of the work. And he frequently left a mess behind him.

One morning, scorned by everyone else in the group, he finally packed his bags and left. When Gurdjieff heard the news, he took off after the man. He eventually caught up with him. When he did, he begged the man to return. He not only waived his fee, he offered to pay him to stay.

The man returned. Everyone was outraged. Gurdjieff said the man was a indispensable part of the community. He called him “grist for the mill.”

“You need him to learn compassion,” said Gurdjieff. “Without him, you have nothing to forgive.”

No POTUS, No Lotus

Forgiveness is another word for what Maureen calls clean mind. A clean mind is one uncluttered by judgements, by stories that blame our experience completely on others. And there’s nothing like annoyances to bring this mental clutter to the surface. As Zen teacher Shunryu Suzuki puts it, “a weed is a treasure.”

As we approach the consequences of unconscious “progress,” we need more mindfulness teachers like Maureen, whether traditional or self-made. They show us that, by collaborating with each other and our situation, we can survive our rampant minds. For, as Joseph Campbell says, “where you stumble, there your treasure lies.”