Who Gets Paid when Fine Dining 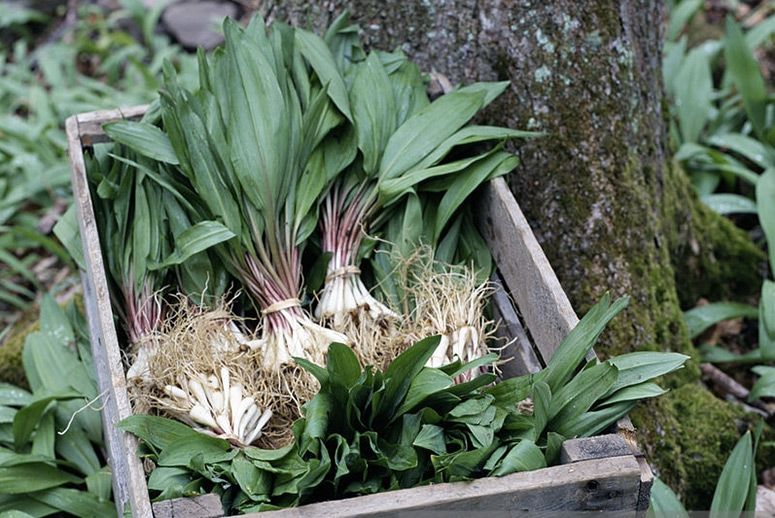 When my dad was a kid growing up in Madison County, Kentucky, his neighbor from down the road, Mr. Daff, used to bring ramps, a type of wild onion, back home from the woods of West Virginia. “There was no AC, so he’d leave the windows open and stink up the whole neighborhood cooking ’em,” my dad said, wincing, lost in a visceral Smell-O-Vision memory of spring’s most pungent wild crop. “Whew! At least your grandparents knew better than to do that.”

Today, many high-end chefs across the country are making like Mr. Daff in the springtime. For several seasons now, ramps have been a coveted commodity, finding their way onto the menu for (highly limited) seasonal runs at places like Mario Batali’s Babbo in New York City and The Blanchard in Chicago. Diners clamor, and restaurants line their pockets. But make no mistake: The whirling dervish of big-city hype around eating the Appalachian “king of stink” (as it’s lovingly known) is still decidedly foreign to my Kentucky-dwelling folks.

Although I’ve presented them with cold, hard, menu-based evidence time and again, the thought of chefs going gaga over ramps (of all things, ramps!) blows my parents’ minds. My mom, like clockwork, always points out that ramps are the favorite food of a foul-breathed, evil stepmother character on Rocky and Bullwinkle. “See, Sarah,” she says, laughing, “even cartoons have our back on this!”

Despite my parents’ convictions, the practice of foraging wild edibles has seen a cross-country revival over the past half decade, becoming a rhetorical touchstone in farmers market circles and a lauded practice among cooks. Ramps would appear to be the apex of that trend, and the mention of them can cause a frenzy. In March, Eater devoted a post to exploring how ramps had returned to New York “for their spring residency.” Even the infamous social media personality Shit Food Blogger weighed in, tweeting, “This idiot found one ramp and put up a sign. Food culture is out of control.” It is a sign for an actual, slanted—nonedible—ramp.

In many ways, foraging is seen as a potential second wave of the farm-to-table movement. What’s next when even fast-food chains are touting ethically raised meat and ingredients sourced from small organic farms? Going even deeper into the natural environment by identifying and harvesting foods that grow without human input. Foraging at its core is simply gathering, and it predates the rise of our agricultural-based economy and culinary traditions by aeons.

My parents may balk at the notion of paying large sums of money to eat ramps, but the thought of the plant as a cash cow for foragers? A downright alternate universe.

It might’ve kept a low profile, but foraging never stopped in many rural pockets of the country, including Appalachia, where it’s been a source of food and recreation for centuries. It’s the less discussed third wheel to the hunting and fishing trifecta. I watch each year as my childhood friends (and now, their children) pose for photos with morel mushrooms thick and long as a toddler’s arm and knobby, spindly ginseng roots, the spoils of a forest and creek-bottom treasure hunt displayed just as proudly as a fish or game trophy. A family tradition in its purest form, foraging often brings together multiple generations and entire communities to swap tips, tricks, and yarns. Also, it’s a whole lot of fun.

More recently, the fresh swell of interest in foraging has become a source of extra cash for many in the region, who are now using their knowledge of wild edibles to supply restaurants with morels, dandelion greens, and, yes, ramps for increasingly extravagant prices.

“Our food habits have changed. People in and around these big urban areas—they buy mushrooms all the time now,” says Robin Reed, the mushroom market chairman of the annual Mountain Mushroom Festival in Irvine, Kentucky. Now in its 29th year, the mushroom festival’s market allows foragers to sell directly to hungry ’shroom lovers and chefs. “The hunters know that this festival will bring high dollar,” Reed says. “This was a short year, so they started prices high at $100 a pound. Then it dropped back down to $60. Then they went back up to $80. The average was about $88 a pound.”

The art of hunting for morels—known to most in the region as “dry land fishing” because morels resemble minnows when sliced in half—has become a cottage industry for a handful of people, with many others clamoring to get in on the action. While morels are a cultural mainstay in Appalachia, the majority of foraging for the fungi in the U.S. is still in the Pacific Northwest and nearby areas, where the climate is suited for hunting for longer spells each year. One of Missouri’s most famous morel hunters uprooted his entire operation and moved to Montana in 2015 for a longer mushroom-grabbing season. The morel is a class of mushroom that’s still difficult to farm successfully, unlike shiitakes.

“One of the vendors we had at the mushroom festival hunts for a living,” says Reed. “He’ll go out and hunt 40 or 50 pounds and then set up on the side of the road with a cooler. He’s originally from the Ukraine, and his grandfather and father taught him how to hunt all the wild mushrooms in Europe. He knows all the mushrooms.”

In western North Carolina, Alan Muskat has taken a more novel approach to capitalizing on the foraging boom, converting a deep knowledge of regional plants into the first-ever “u-pick, forage-to-table event company”: No Taste Like Home. Muskat is so committed to his craft that all his emails end with the peppy send-off “Foraging along.”

“Our bread and butter is tours where we take people out in the woods and then teach them what’s edible and what’s not,” Muskat says. “What they gather, they can take to one of six local restaurants we partner with, and they’ll prepare it for them free of charge. Since 2011, we’ve taken about 1,000 people out each year. Our business doubled in 2013 and again in 2015, and that’s even without doing any real advertising.”

It would seem reasonable at first blush, then, to assume that foraging on its own could become a traditionally rooted means of buoying Appalachian towns—a low-key economic engine in an area bogged down by unemployment, drug abuse, and environmental crises.

But that idea gets complicated, fast.

An ever-increasing amount of woodland is lost in Appalachia each year to the drumbeat of development, destroying the fragile microclimates in which the most prized wild edibles flourish. When the siren song of foraging for cash meets the continuous loss of habitat, experts worry we may soon see coveted Appalachian plants—many of which take decades to reach maturation—becoming endangered or extinct. (Wild ginseng is already on the ropes.)

“It’s not necessarily that people are overharvesting these plants. It’s a combination of land-use changes and increased development, deforestation, and then you throw in the gut-wrenching loss of hundreds and hundreds of entire mountains due to the mountaintop removal from coal mining,” says Susan Leopold of United Plant Savers, a nonprofit dedicated to protecting medicinal plants native to the U.S. and Canada. Both Leopold and Reed note that logging has taken an enormous toll as well, turning plant and fungi ecosystems completely topsy-turvy and leaving almost barren environments in their wake.

“The interest in foraging is increasing, but that is resulting in more pressure on land and more instances of poaching from land where people shouldn’t be taking plants and fungi,” says Davis. “I encourage foragers to reach out to landowners and try to develop mutually beneficial relationships that would result in the foragers having access to private land, and in return they provide the landowner with ‘goodies.’ ”

If we’re giving folks the benefit of the doubt, it’s easy to imagine that some of the poaching is without intent. When zigzagging through the woods, it’s likely that even the most responsible foragers are going to misjudge the lines of demarcation between public and private land every once in a while. Then there are those brazen about their thievery—and they’re not just selling for cash. Leopold recalls a harrowing—but not uncommon—incident that occurred near United Plant Savers’ sanctuary in Rutland, Ohio, which illustrates the importance of knowing the source of your wild edibles.

“What’s really going on with a lot of these plants is it’s an underground currency. If you’re a drug addict and you’ve got some guy who’s going to give you a fix for a big bag of ramps that he could turn around and sell for way more money than that little bag of heroin…that’s really out there,” says Leopold. “Right down the street from our sanctuary, one of our neighbors—it happened to them recently.”

Leopold praises the numerous ramp festival organizers across Appalachia who encourage not only the plant’s legal sales and harvesting but the responsible means of eating it: only the leaves and never the blub, which takes seven to eight years to mature.

While wild foraging on a mass scale likely isn’t a long-term, sustainable way of life for the region’s people or plants, an adjacent practice known as “forest farming” just might be the answer. A cross between traditional farming and foraging, forest farming is the cultivation of a specialized set of native plants (such as morels, papaws, walnuts, and other non-timber forest products frequently foraged) under a wooded canopy, supporting a complex ecosystem that lets farmers and plants work hand-in-leaf to build out food for eventual harvest. One of the most prominent forest farms is Wellspring Forest Farm and School in Trumansburg, New York, which offers everything from classes on fungi and ethical foraging to a mushroom-specific CSA between June and September each year.

“Forest farming is a good answer to the question ‘What comes up on its own, and what’s edible in there? What would be there in 10 years or 20 years?’ It explores what’s naturally occurring versus what isn’t. To me, that’s even more radical than anything you could ever plant,” says Muskat.

A recent United States Department of Agriculture grant awarded to Virginia Tech will allow the university to work alongside nonprofits such as United Plant Savers, Rural Action, and Appalachian Sustainable Development to train individuals interested in forest farming in how to get started, using the momentum behind foraging’s limelight status to plant the seeds of a stronger ecological future for the region.

“If we can get people growing these plants to supply the commercial market [through forest farming], then it takes the pressure off of wild populations,” says Leopold. “Then we are saving the genetic biodiversity and, ultimately, protecting the integrity of the forest.”