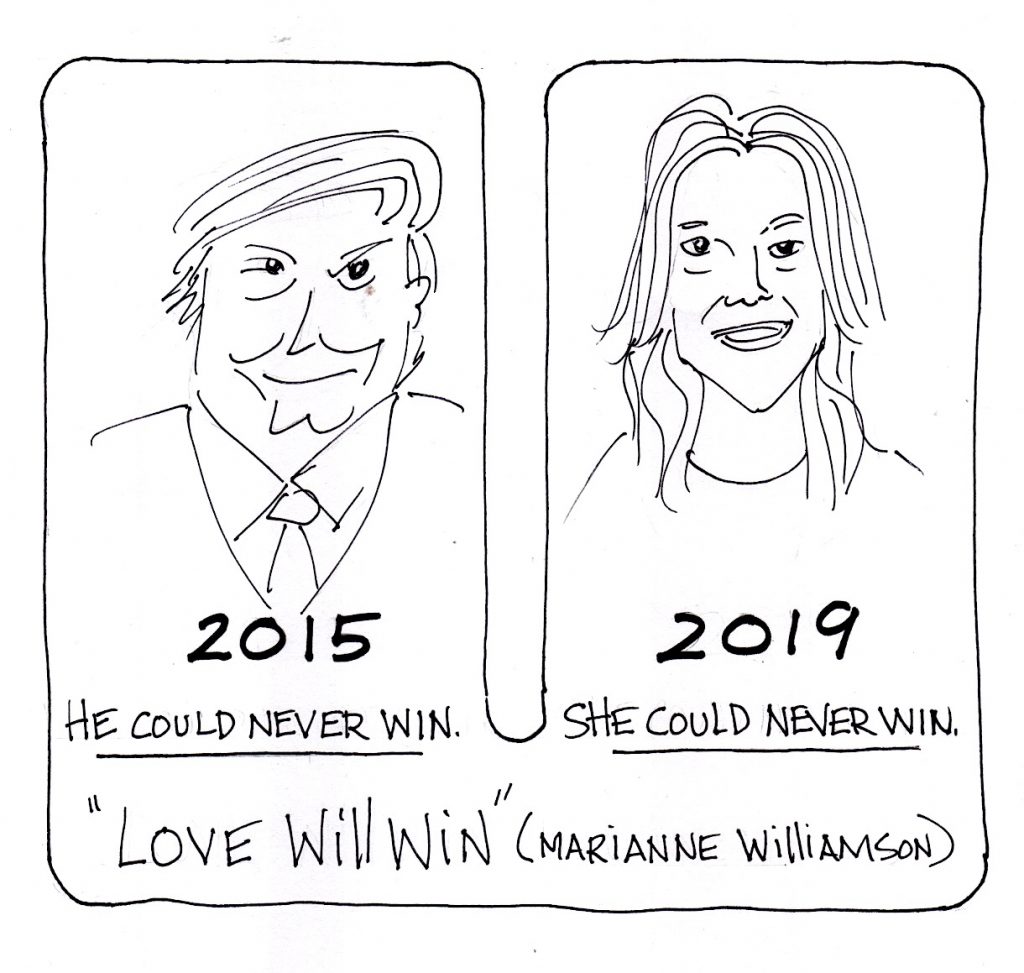 Williamson is still in the race. She can still win. If you like what she has to say but you think she can’t possibly win, consider this:

Humanity is in the same position. Williamson has about as much chance of winning as we have of surviving. And if she can’t succeed, neither can we.

In A New Earth, Eckhart Tolle sums up what scientists have been saying for decades and what extreme weather is demonstrating today. “Humanity is now faced with a stark choice: Evolve or die.”

If humanity is going to survive, we need a quantum leap. No other presidential candidate embodies such a radical transformation. Any one of the other candidates would make a great vice president, but none of them come close to what we need in a president today.

Thirty years ago, I thought the top three environmental problems were biodiversity loss, ecosystem collapse and climate change. I was convinced that with enough good science, we would be able to solve these problems. But I was wrong. The real problems are bigger than that. They are things like selfishness, greed and apathy. For those kinds of problems, good science isn’t enough. For that we need a spiritual and cultural transformation.

People know we need a radical change. That’s why the current president got elected. But all that did was to step on the gas: to floor it.

To understand how we got to this point, you have to look at the big picture. There have been dozens of major civilizations throughout history, and every one of them collapsed. They overtaxed their environment. And when things started to fall apart, they did the same thing we’re doing now: they doubled down.

Now they’re all gone. Why should we be the exception? Because we could recognize that civilization itself is an aberration.

Before civilization, Homo sapiens thrived for over 300,000 years. How? By being exceptionally social creatures. Humanity’s secret, magic weapon was cooperation.

Marianne Williamson talks a lot about love. If that is too woo-woo for you, take a tip from Abraham Lincoln: a house divided cannot stand.

Divided we fall. What every civilization has been built on, and what we are seeing more than ever today, is the opposite of cooperation. It’s “every man for himself.”

There is a word for this: fear. When you’re afraid, you don’t cooperate. You can’t. Your choices narrow to fight, flight, freeze, faint… basically, you’re f-d. The opposite of fear/fight-or-flight is a state of calm openness, a.k.a., love.

We got to this point together. None of us can get out alone. Nobody can be “first.” It’s everyone or no one. If you’re in a burning building and everyone runs for the door, few if any can escape. This building is burning. Are you running for the door?

Today, running for the door looks like electing a savior. But looking to a savior is like taking opioids for the pain. We don’t need a hero or heroine any more than we need heroin. Fascism is facile: it’s an easy escape — for a while. What we really need is to face the truth. And to understand what’s really going on, we have to look, once again, at the big picture.

What we’re seeing now has been going on since before history began. At some point, we opened a box called conceptual thinking, and the clock has been ticking ever since.

Conceptual thinking is the original drug. “Fake news” is that drug today. It’s fantasy: escape from reality. The fantasy most of us hide behind includes blaming others. If you believe in enemies, you are imagining things. We are all in this together. There are no bad guys.

Practically every presidential candidate speaks, at least some of the time, in anger. Any psychologist will tell you that behind anger is always some more primary emotion. Usually it’s fear: the perception of a threat. Any candidate that talks in anger is perpetuating fear.

Even Marianne Williamson talks about corporations and corruption as if they are evil forces. We can’t afford to do that. Besides, it’s not true, unless by “evil” you mean misguided, and in extreme cases, out of control, like a runaway train.

Hitler wasn’t evil. A child rapist isn’t evil. Such people only arise in cultures that believe in evil. We need to give up the fairy tales. Grow up or die: that is our choice.

There is a solution. Nonviolent Communication (NVC) was founded in the 1960’s to cure our 5,000-year addiction to “us vs. them.” The results it produces are astounding.

Don’t give up on humanity. When is the darkest hour? Don’t you want to see a new world in your lifetime? I for one would give everything I own to see it happen. What else is there to live for? What else is left? Who doesn’t know someone who has recently died in despair? Who isn’t living on the edge?

Remember that things have not always been this way. We are waking up from a nightmare. And what happens when you wake up? Everything changes.

There is a bottom line here, and it’s either love or fear. Will you put your life on that line? Pope John Paul II says “the person who does not decide to love forever will find it very difficult to really love for even one day.” Decide today. Here’s how:

We are in the middle of a hurricane. Only God can save us. And “God” means waking up. If you want to know God, do whatever you can to go from fear (fight-or-flight) to love (calm). “Be still and know that I am God.” When you can see your life not as a problem or an emergency but as an opportunity and an adventure, then you have found God. Then all “enemies” disappear.

Watch videos of Marshall Rosenberg, the founder of NVC. Listen to Eckhart Tolle. Take psychedelics. Do anything to open your heart.

We are truly living in a dream. That means anything is possible. Is anything too difficult for God? 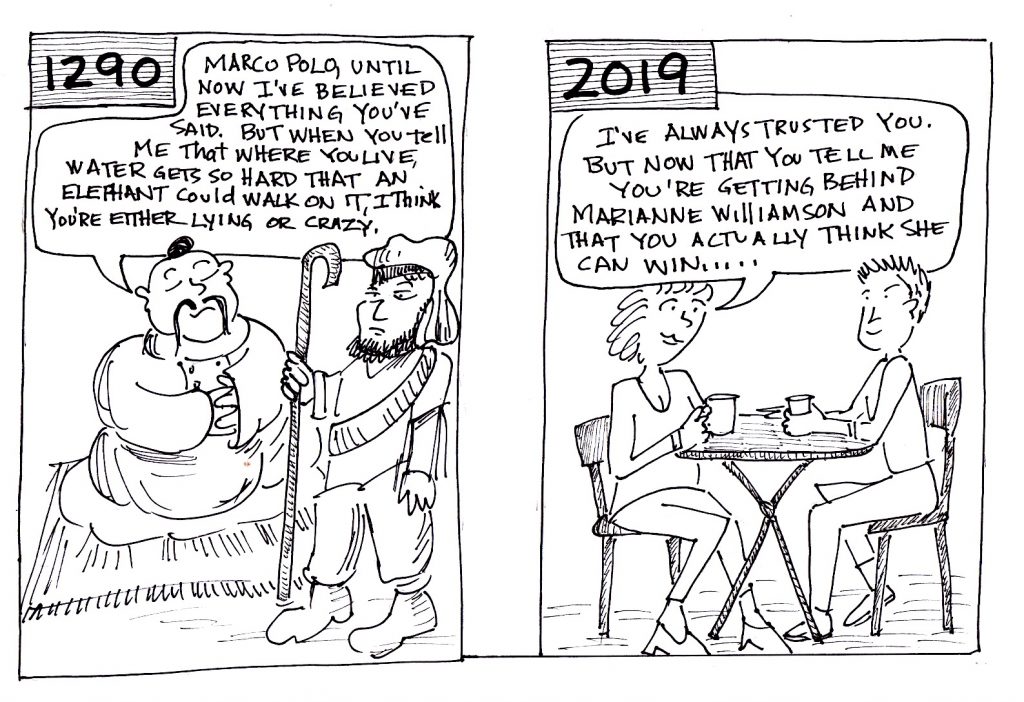 Do you want me to tell you something really subversive? Love is everything it’s cracked up to be. That’s why people are so cynical about it. It really is worth fighting for, being brave for, risking everything for. And the trouble is, if you don’t risk anything, you risk even more.