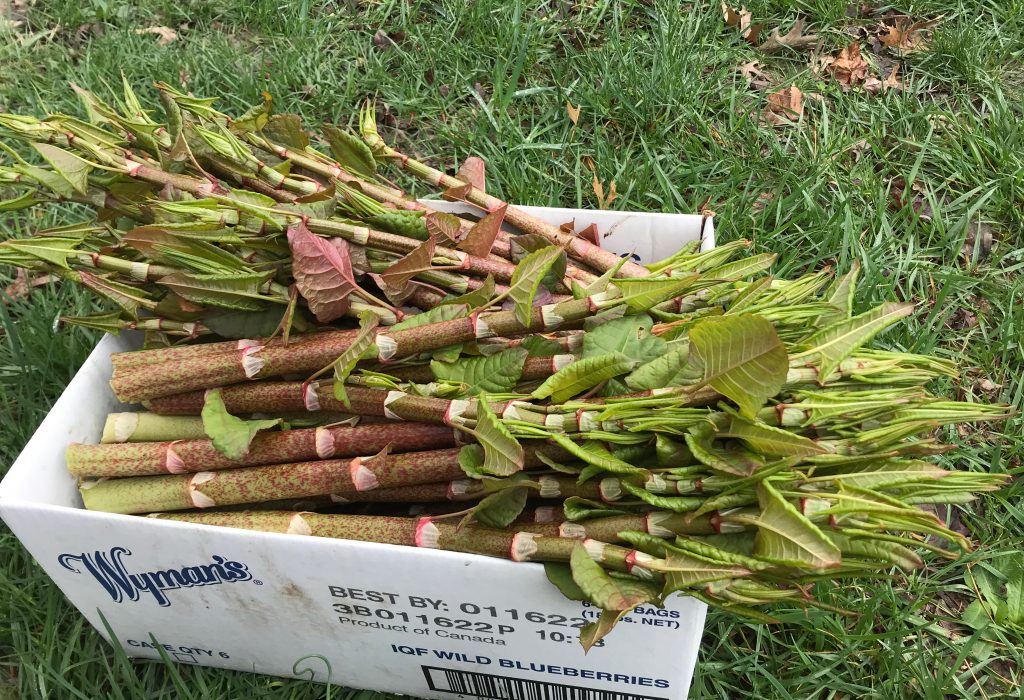 Japanese knotweed has been shown to be effective against known strains of Coronavirus. It is one of the highest sources known of resveratrol, the highly-touted “phytonutrient” known for its antioxidant and other health-promoting qualities. Does that mean the active ingredient in knotweed’s anti-viral effect is resveratrol? If so, does that mean we should be taking resveratrol supplements?

Knotweed is one of the most common wild edibles in North America. I recently gathered a box-full of it from a park in central Asheville. You simply chop it up and simmer it briefly. Most people remove the leaves but it’s not essential. Nor does knotweed become toxic in age; just tough.  However, like rhubarb, it is high in oxalic acid, which is why it tastes quite similar. In reasonable amounts, this is not a concern for most people unless they have a propensity for kidney stones or osteoporosis.

Like anything else, knotweed’s medicinal value depends on dosage and preparation, not to mention that usually the root is used for medicine, not the shoot.  With regard to the anti-viral benefit of eating the shoots, it’s true that the root has more of most of the recognized medicinal compounds and that their concentrations are highest in the fall (references below).

This is not surprising, as it is true of plants in general. But that doesn’t mean you can ONLY benefit from roots dug in the fall or from specially-prepared extracts from those roots. On the contrary, it is better for you to eat what is available locally in season as opposed to popping a bunch of pills of isolated compounds (see last quote below).

Just as drugs can be dangerous, so can supplements. Supplements are medicine, not food. The time to use them is when you have a disease, not to prevent one. You wouldn’t have surgery every time you needed nutrients, yet it’s popular today to “hack” your body. Don’t hack at yourself. He who lives by the supplement dies by it.

Not all desperate measures are called for in desperate times. To stay healthy, which literally means whole, eat whole food and live a whole life. Take this opportunity to get back in touch with nature and to eat the one truly natural food: food from nature.

I do take a few supplements right now because I have a diagnosed medical condition that is treatable, in the short run, with supplements. But I’m shifting my diet and lifestyle as well. Even I don’t forage nearly as much as I should!

With social distancing in place, parks may be closed, but knotweed thrives just about everywhere. The plant doesn’t become toxic later in the season, but it does get tough and bitter.  So go out now and get some sun, some exercise, and some knotweed.

“the root contains a much higher level of resveratrol than the stem and leaf, and it is accumulated in its highest level in October.”

“Besides resveratrol, knotweed contains a large variety of secondary metabolites with antioxidant activity, such as quinones, phenolic acids, stilbenes, tannins, flavonoids and catechols [20]. The roots of Japanese knotweed are the most often considered, but also rhizomes, leaves, stems and flowers of Sakhalin and the Czech knotweed represent a potential source of natural bioactive antioxidants [32]. The main active components of knotweed are stilbenes and quinones [33]. Researchers detected in underground and aboveground parts of knotweed similar bioactive components…

Pogačnik and Ulrih, “Invasive Knotweed Species As A Rich Source Of Antioxidants,” Journal of EcoAgriTourism, 2018

“While Ahmad’s lab and others continue to study the compound, he is also a strong advocate of the whole-food approach, especially when it comes to resveratrol. Remember quercetin, mentioned above? When you eat muscadine grapes—one of nature’s richest sources of resveratrol—you also get a bit of quercetin, along with numerous other phytochemicals. The point is, there might be dozens or even hundreds of compounds in the simple grape—as in other fruits—that aid in the absorption and use of resveratrol in the body. And resveratrol might in turn do the same for other nutrients…

“That’s still only a fraction of the amount of resveratrol found in most supplements on the market, but then again, it’s the entire package—the synergy of the nutrients—that matters.”