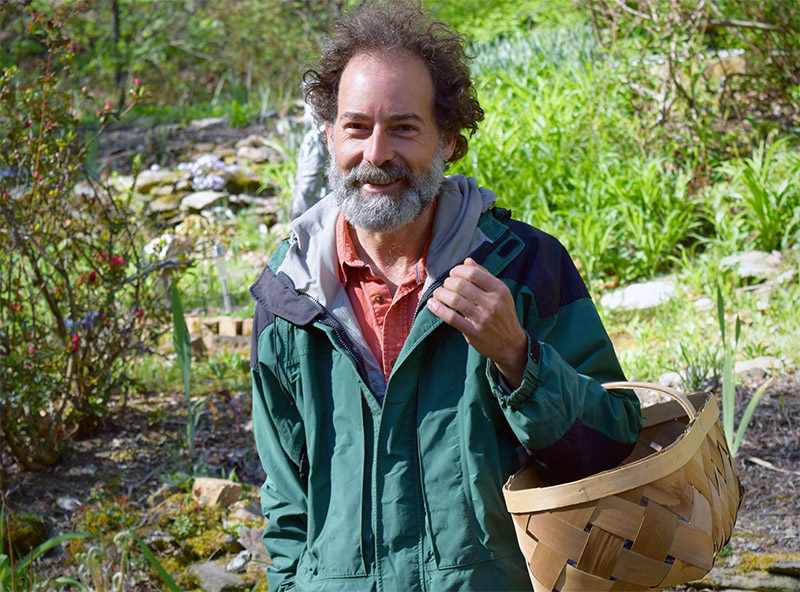 For my entrée, I had ordered the wood-grilled pork shoulder. Given the stellar reputation of Asheville, North Carolina’s The Market Place Restaurant and Lounge helmed by visionary chef William Dissen, it would likely be mind-blowing but it was the starter I’d really looked forward to.

With dozens of innovative eateries and craft breweries, the free-spirited Asheville has long been a national cultural and culinary hub. While I enjoyed many a meal and hoppy libation in many of these outstanding establishments, only at Market Place had I played an active role in procuring round one of my dinner twelve hours earlier. The starter course and I had an emotional connection.

“Ninety percent of everything you see around you is edible,” said the soft-spoken Alan Muskat, CEO and Chief Edutainment Officer of No Taste Like Home, holding up a small flower. A reasonable utterance in perhaps a convenience store, but I, along with six others including Alan, were not amid Slurpees and twirling taquitos. We were standing next to a babbling brook under the canopy of a dense North Carolina forest, a half-hour drive outside of Asheville. “Daffodils, however, are poisonous,” continued Alan. With that, the gentle man bit the colorful bloom off of its stem and began to chew. The contemplative corners of his mouth turned upwards as he studied the headless stalk. “Not these violets, though,” said Alan, swallowing. “They are delicious.”

Eating something unfamiliar that you’ve just yanked from the earth is imposing. It is not like plucking an adorable blueberry from a bush where you have the mental security of recognition, nor is it comparable to noshing on a carrot recently wangled from grandma’s garden. The forest is full of scary things and while the term “star chickweed” doesn’t sound particularly intimidating, when you first bite into it, death seems imminent and tastes like corn silk.

Thanks to Alan, who for twenty years, has been leading foraging excursions and wild food workshops in Asheville’s surrounding wilderness, that fear and discomfort begins to give way to curiosity as the forest floor is transformed from a daunting wilderness into a primal produce section. 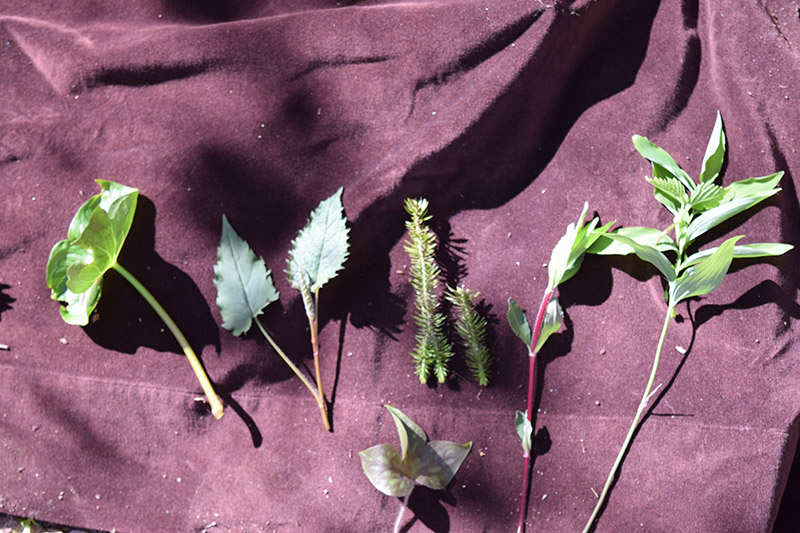 “Our motto is: there’s no taste like home,” said Alan as his assistant handed each participant a small bucket and an old knife tied to a small shovel. Alan echoes my initial discomfort. “People believe mushrooms are deadly, plants are poisonous and people can’t be trusted. The goal at No Taste Like Home is to make the forest feel safer and more like home,” he says before bending over an old log and exposing a mushroom. “Lilac Tooth Polypore!” exclaims Alan. “Not too tasty but certainly not poisonous. The mushroom we are really looking for is the morel.”

At the word morel, the day’s objective became clear. The morel mushroom is the Stanley Cup of foraging: hard to come by, worth a lot of money and finding one makes you a champion. They are seasonal, found near old campfires and around apple, birch and ash trees. Usually buried by leaves, they look like an elongated brain, are about the size of an adult thumb, and taste best when sautéed in butter. An ounce will run you about twenty dollars. While it is fun foraging for things like the bountiful Solomon Seal and the wasabi-like cutleaf toothwart, seeking out the elusive morel turned foraging into sport. I had to find one.

Foraging for morels with No Taste Like Home is a paradox. On one hand, Alan broadens my horizons, giving identity and purpose to the hundreds of plants and fungus that to the untrained eye look like a sprawling inedible tangle of browns and greens. On the other hand, awareness of the morel’s possible proximity creates a singular focus inside me that seems to make all else disappear. No Taste Like Home’ aim is to bring us together and suddenly my fellow fungus foragers are my direct competitors.

I trace my way up and across a narrow stream, trying to create distance between the other foragers and me. I can hear Alan discussing the medicinal properties of Turkey Tail. Turkey Tail is another mushroom that looks similar to the aforementioned lilac-toothed polypore only this one mushroom cures cancer. Not interested.

I have to kick through the leaves gently so as not to decapitate the mushroom from its stem. It is as delicate a process as it is urgent. Looking for a mushroom is actually causing my heart rate to accelerate. I think about what it would be like to be a Smurf. Those guys actually lived in Mushrooms. Would they actually consider eating their home?

“I think I found one!” screamed the youngest of the foragers. She is a girl of maybe twelve and is the closest of the foragers to me. I splash back across the stream as she bends down to extract from the earth whatever it is she thinks she’s found.

“Wait!” I said, as if I get there before she picks it, I can somehow lay a co-claim on whatever it is. She looks at me, puzzled as I catch my breath.

Sure enough, like an inch-high alien, peaking from the leafy forest floor, is a morel. This girl doesn’t even know what she’s found! I think to myself. I could just tell her its nothing and she might just walk away. Then I could pick it and it would be all mine. A twelve-year old’s palate lacks the sophistication to appreciate such a delicacy anyway. The morel’s robust flavor would bore her in the same way a symphony might bore a toddler.

The little girl bends over to pick the mushroom.

I consider stopping her but Alan’s words from earlier and the overall mission of No Taste Like Home begin to swirl in my head. “People believe mushrooms are deadly, plants are poisonous and people can’t be trusted. The goal, at No Taste Like Home is to make the forest feel safer and more like home.” 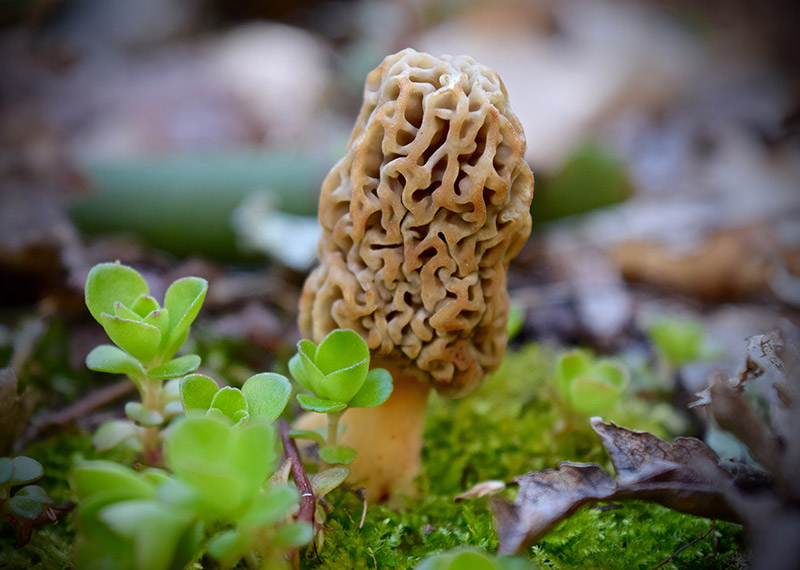 She calls to her mother and then Alan and his band of happy foragers make their way up the hill. I look at my feet defeated, and there, like a beacon is a second morel. “Another one!” I say, and pick it up just before the crowd gathers.

“Look what we found, mom!” she beams.

Look what ‘we’ found, I think to myself. I suppose it takes a team to win the Stanley Cup.

An hour later, with our two morels in tow, we are back where we started. Alan thanks us all for coming but before we go, notes that we are standing under an apple tree among a thick grove of birch trees. Not too far away is a fire pit. It begins to click into place. We look down. All over the ground is a Smurf Village of beautiful, brainy, delicious morels; more than enough to take that night, to Chef Dissen at The Market Place where incorporating foraged food is one of their specialties. We’d hit the jackpot.

As I watch my fellow foragers go nuts picking morel after morel, I couldn’t help but take in the vast, beautiful, complex forest that surrounded me. Out there was Turkey Tail, Solomon Seal, Fiddler’s Fern, Cutleaf Toothwart and hundreds and hundreds of mushrooms that could do anything from make your mouth water to curing your cancer. The forest was good and it felt like home. A truly delicious, beautiful home.