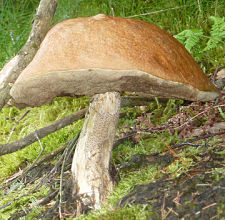 On the list of ridiculous, time-consuming trends, add a new one: foraging for your food.

It’s the latest obsession among food snobs. There are high end restaurants and markets out in Los Angeles and San Francisco where the menus are at least partially made up of foraged food. I guess that means, well, some stuff they found growing next to a sidewalk.

As if organic food and roof top gardens aren’t enough extra work, now, to be considered a real foodie, you’ve got to go hunt for your meal, and I don’t mean among the aisles at Shoprite.

The foraging thing might work out west, but I don’t have a lot of confidence in the “edible” things I see growing around Paramus. I know, we’re the Garden State, but the key word there is garden. We plant the stuff and then pick it. We don’t wander around and think, hey, can I make a salad out of this big mushroom? If I had to put a meal on the table from my neighborhood parks, I suppose we could have dandelion greens and onion grass, though I have no idea if that’s edible, and I hope a dog didn’t pee on it.

I lost patience with food snobbery long ago. Watching shows where chefs compete and are told by contemptuous judges, “I felt the mixture of tart and sweet should have been more amusing” just irritates me. If you need to amused when you eat, please come to my house, where you can watch my 13 year old cut his meat so awkwardly that small pieces fly off the table, and my ten year old kicks him under the table and then swears he didn’t.

Just in case anybody needs a history lesson — civilization did not begin until people had to stop constantly hunting for food. It was only when food sources became stable that humans had time to educate themselves. Now there’s a subculture that wants to return to those halcyon days of hunting and gathering. Well, their timing is excellent, because apparently we can’t afford schools anymore.

Previously, my definition of foraging for food would have been watching my 13 year old rummage around the pantry and freezer during those critical after-school hours. To see him empty a plate of watermelon, a meatball and mozzarella Lean Pocket, a banana, a bowl of ramen, some V8 splash and a couple of Snickerdoodles down his gullet, is to be reminded of the urgency people have for food, and how lucky we are that it’s available at a store.

Perhaps the foraging movement is just the inevitable backlash against people that buy their salads pre-washed. Those of us that buy clean and perfect baby spinach leaves in a sealed plastic bag just aren’t authentic, we’re not honest, we’re not real. Yeah, OK. But while you’re wandering around in the woods hoping to find something, anything, that a dog didn’t pee on, I went to the store with a list and got just what I wanted. I’m at home now, relaxing.

Like all extreme trends, this one has a few books coming out in the fall — cookbooks. You can find a recipe for a pulp of air-dried sea buckthorn with pickled rose hips. I don’t know if that’s a breakfast item, a salad or a dip. I guess the real question is, would my son eat it for an after school snack?